Polaris CEO Scott Wine pulled the power-toys-for-boys titan through the worst of the Great Recession. Now he’s gunning for the most iconic name in motorcycles 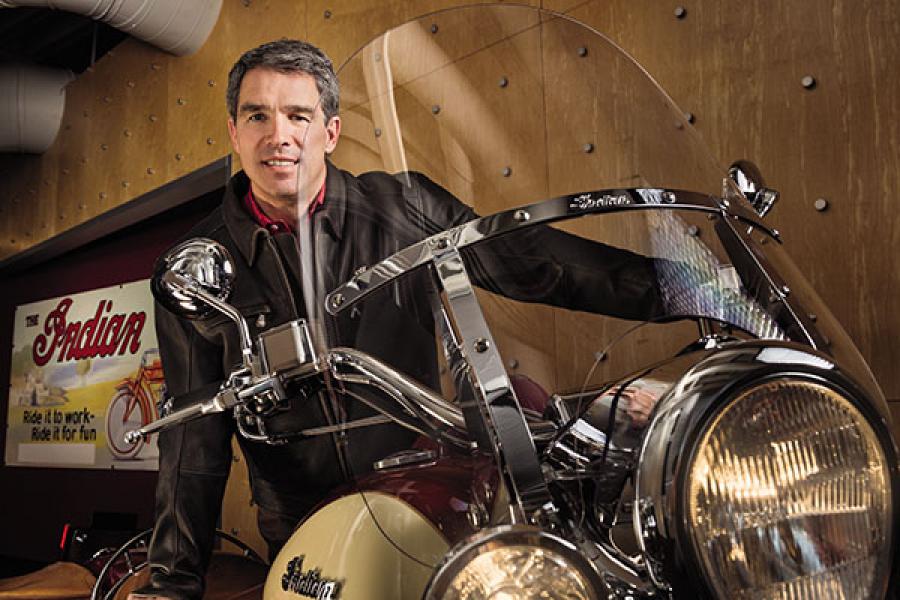 In the history of American business there have been some legendary rivalries. Coke vs Pepsi. Apple vs Microsoft. GM vs Ford. Sixty years ago, the list would have included Indian Motorcycles vs Harley-Davidson, but after Indian, America’s first motorcycle maker, went bankrupt in 1953 that rivalry disappeared. A succession of owners tried to revive the company over the years, but insufficient capital, along with trademark and quality issues, doomed every attempt.

Now, a new owner with deep pockets and a proven track record is trying again, promising to take on Harley-Davidson in the lucrative motorcycling-as-a-lifestyle market.

Polaris Industries, known for its snowmobiles, all-terrain vehicles (ATVs) and Victory motorcycles, acquired the Indian brand in 2011 and will introduce its first all-new Chief model next year. “We’re the owner of the first American snowmobile company,” says CEO Scott Wine. “Now we own the first American motorcycle company. It’s right in our wheelhouse.”

Polaris, based in Medina, Minneapolis, has an impressive track record. Wine, a veteran of AlliedSignal, Danaher and United Technologies, joined the company as CEO in September 2008, just two weeks before Lehman Brothers collapsed. Yet Polaris fared better than most during the downturn, consistently outperforming the rest of the power sports industry, picking up market share and beating analysts’ expectations on a regular basis.

In October, a bullish Polaris raised its earnings outlook, saying 2012 is shaping up to be another record year. Revenues should be up 20 percent, to $3.2 billion, and net income will be up 35 percent to 37 percent over 2011’s $228 million. Polaris shares are up more than 50 percent this year, trading at a recent $82. Wine’s goal by 2018 is to achieve $5 billion in revenues (at least one-third of it from outside the US) and 10 percent net profit margins.

Global headwinds are a concern, of course, especially in Europe, but Polaris has momentum. Analysts expect market-share gains in ATVs and motorcycles to continue as production of new products like the Ranger XP 900 and RZR all-terrain vehicles ramps up.

Meanwhile, its joint venture with India’s Eicher Motors, a maker of commercial trucks and motorcycles, is just beginning, opening up new opportunities in emerging markets.

Wine sees similar potential for Indian. He expects the business to generate $300 million to $500 million in revenue within three to five years. Yet he won’t reveal what Polaris is sinking into the relaunch, and given the number of false starts Indian has had, it’s easy to be pessimistic. But Wine has reasons for confidence.

Though Polaris got its start with snowmobiles in 1954, it’s been making tracks in motorcycles since 1997, building the Victory brand from scratch. In only 15 years, Victory has grown to number two in the world’s $4 billion market for heavyweight bikes (1400cc displacement engines and above), ahead of Honda, Suzuki and Yamaha. It was rough going early on, but sales have tripled in the past three years, to 13,000 motorcycles a year, with retail prices between $12,000 and $28,000. Still, Victory remains miles behind Harley-Davidson, which sells 233,000 bikes a year to some of the most brand-loyal customers on Earth.

The business Polaris acquired from private equity firm Stellican in 2011 was producing Indian bikes in small numbers at an assembly plant in Kings Mountain, North Carolina. The styling was gorgeous but marketing them was tough.

“The problem,” said Wine, “is the bikes are very, very expensive—$37,000 or so—at the high end of what anyone would spend on a motorcycle. And the quality and performance were just okay—not what Polaris wants to stick its name behind.” Polaris made some improvements but produced only about 100 this year.

Details about the first new bike, on sale next summer, are closely guarded. One thing for certain: They will be cheaper, to better compete with Harley-Davidson’s models, which sell for $8,000 to $24,000. Harley, meanwhile, recently sold its MV Agusta and Buell units to concentrate on its core brand.

The new Indian is being engineered from scratch, with new frames and new engines, as well as a handful of classic Indian styling cues, such as the war bonnet, the valanced fender and the engine’s exposed push rods. “Think of how Chevrolet took the ’68 Camaro and brought it forward to 2010 when it was relaunched,” said Steve Menneto, vice president of motorcycles at Polaris. “It was a modern car, with all the technology, electronics and quality, without losing the brand heritage.”

Indian production was moved in 2011 to a Polaris factory in Iowa where the company already makes Victory motorcycles, but Menneto said none of the components will be borrowed from Victory. “We’re spending a lot of money and time making sure we don’t cross over at all.”

With only 20 Indian dealers left in the US, Polaris also has to build a new distribution network. Victory has some 450 dealers in North America, many of whom also sell Polaris machines, but Indian will have a separate dealer network, Menneto said.

While Polaris is taking pains to keep the two brands separate, its experience building Victory has taught it a lot about motorcycle buyers, said Menneto. “They don’t buy just the machine. They buy the brand, the company, the apparel, the accessories and the connections to fellow riders within the brand,” he said. “All that learning we’re putting into Indian as well.”

Tweets by @forbesindia
Are Gun-Related Deaths Linked to Income Disparity?
It's Very Hard to Design the Right Auction For Resources