The world is awash in streaming services, and Meg Whitman already had her fortune—but then Jeffrey Katzenberg came calling with a mobile-focussed startup. With nearly $1.8 billion raised and America on lockdown, consumers may have no choice but to try Quibi 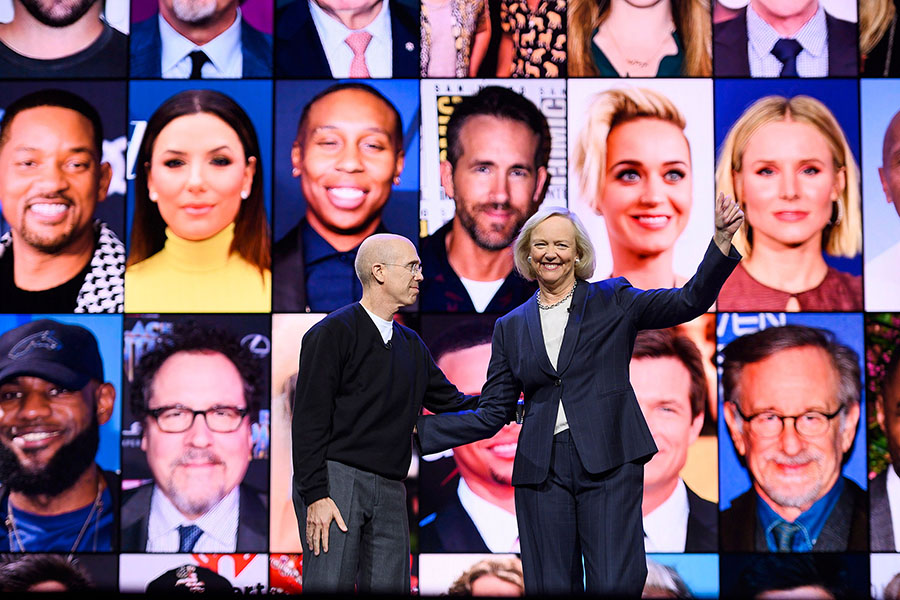 Minutes after Meg Whitman announced she was stepping down as CEO of Hewlett Packard Enterprise in November 2017, her phone rang. It was Jeffrey Katzenberg, whom she has known since they both worked for Disney in the late 1980s and early ’90s—Whitman was in strategic planning; Katzenberg ran the film studio.

“What are you doing?” Whitman remembers her friend asking. “I don’t know,” she replied. “I’m the chairman of Teach for America. I’ll probably do stuff with my husband and travel.” She continues: “He goes, ‘No. What are you doing tonight?’ And I said, ‘Knowing you, Jeffrey, I’m having dinner with you’.”

Katzenberg flew to Silicon Valley and, over dinner at Nobu in Palo Alto, pitched his idea for bringing high-calibre entertainment to mobile phones. For Whitman, the idea checked all her boxes: The potential market for the service was huge, prevailing trends were right and it occupied a unique niche.

“I ultimately said, ‘You know what? I think I have another startup in me’,” says Whitman, 63, who first got rich (she’s worth $3.3 billion) working with another visionary founder, Pierre Omidyar. She helped build eBay from 30 employees and $4 million in revenue when she joined in 1998 to more than 15,000 employees and $8 billion in revenue when she left a decade later.

“We’re pioneering into a space that only exists because of two things: YouTube, and Steve Jobs and the iPhone,” Katzenberg says. “Those two things have now created a new piece of real estate, and that real estate is 7 in the morning until 7 at night. That’s the thing that’s exciting to me.”

Two years after that dinner, Quibi (an awkward portmanteau of quick and bites) is poised to launch its mobile streaming service offering original movies, reality TV, comedies and news edited into bite-sized nuggets of 10 minutes or less, optimised for viewing on phones.

Many in Hollywood think it’s a terrible idea. At a time when viewers are awash in entertainment options, many of them free, who is going to pay for another? “If I’m going to watch Game of Thrones in eight-minute chunks, what’s the difference between what he’s doing and me hitting the pause button?” scoffs one powerful Hollywood insider, who requested anonymity because his clients sell shows to Quibi. Barry Diller, perhaps the greatest Hollywood visionary of his generation, recently called Quibi a “gutsy speculation” for his former protégé (Katzenberg, 69, worked for Diller at Paramount in the ’70s). “He’s so naked out there with this.”

It’s not a new idea. Back in 1999, Katzenberg tried something similar with Pop.com, which was supposed to deliver short animated and live-action films across the internet. With the technology for viable video streaming still in its infancy, it was an uncertain notion at best. Despite being backed by Steven Spielberg, David Geffen, Brian Grazer, Ron Howard and Paul Allen, Pop.com was dead within a year.

This time around, Katzenberg raised enough money to play it out, including $1 billion in August 2018 from the likes of Alibaba, Disney and Sony. It fortuitously wrapped up a $750 million follow-on round in March, just days before the coronavirus froze the country. “I’ve never seen an environment change this fast,” Whitman says. “Every day is a new day, with new data and new concerns.” Luckily, Kevin Hart and Jennifer Lopez already finished work on their shows, and Spielberg has a movie in the works, attracted by a “cash plus” deal that lets them retain rights to their material. After two years, they can stitch together their “quick bites” and release them as a full-length movie.

Inadvertently, America’s lockdown might have created the perfect moment for Quibi. Nielsen projects media viewing will spike by as much as 60 percent due to Covid-19. People will certainly know it’s available: Quibi is spending a gargantuan $400 million to promote its new service and in mid-March announced that it will offer the service free for three months.

“This is a moment in time in which we have a chance to do something that is putting some happiness and some joy and some fun and some laughter into people’s hands,” Katzenberg says.

Quibi also has the advantage of being loaded with fresh content just as the production of all new shows and movies has been stalled by the pandemic. Quibi has been stockpiling programming since last September in anticipation of a possible writer’s strike, fearing a replay of 2008, when a union walkout halted new production for 100 days.

The service debuts with 50 original shows, including movies offered in cliff-hanger chapters such as the thriller Survive, starring Sophie Turner (Game of Thrones) and Corey Hawkins (BlacKkKlansman); 120 reality shows and documentaries; plus news, weather and sports. In all, Quibi promises to deliver 8,500 quick bites from 175 shows in its first year.

But the $1.8 billion question remains: Will anyone pay to watch them? Some Hollywood players are adopting a “DBA Jeffrey”—Don’t Bet Against Jeffrey—attitude.

“Jeffrey has only taken a couple of big swings in his life, and he’s hit it out of the park,” says a senior executive at one of Hollywood’s major talent agencies. “If you had blindly bet on Jeffrey Katzenberg for the past 30 years, you’d have made a lot of money.”