As computers overtake investing, a small college in New Jersey is remaking itself as the preeminent training ground for Wall Street's financial engineers. It can teach you a few lessons 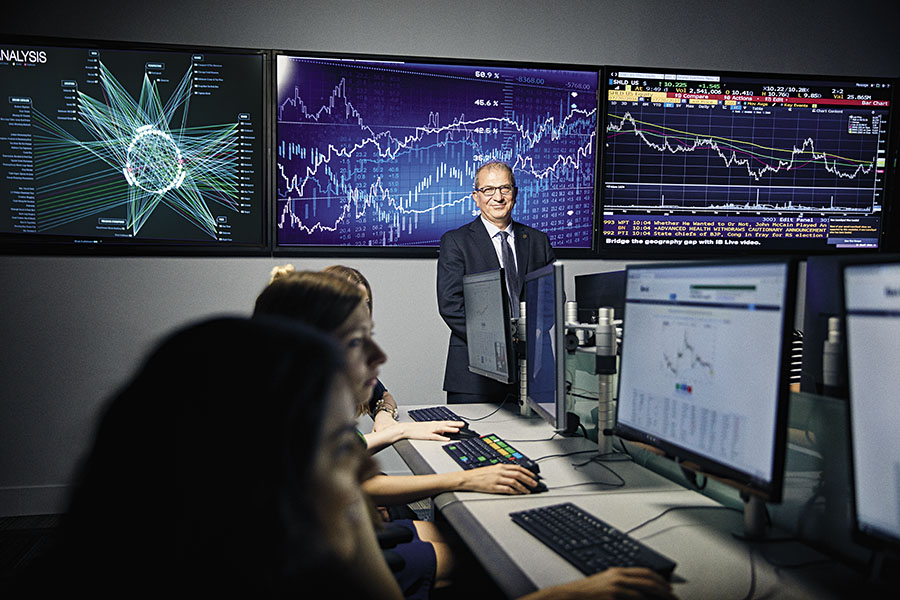 Preparing for the age of machines: Nariman Farvardin, president of the Stevens Institute of Technology, at the school’s Hanlon Laboratory for Financial Analytics and Data Visualization
Image: Matthew Furman for Forbes

Twenty-two-year-old Dakota Wixom is waving an 8-inch wand as he manipulates layers of screens containing data visualisations, applications and stock market charts, moving them around between five large presentation screens in a darkened room. The scene is reminiscent of one with Tom Cruise in Minority Report, but with a Wall Street twist. There are about two dozen undergraduates sitting attentively at workstations in this computer finance lab at the Stevens Institute of Technology, across the Hudson river from midtown Manhattan in Hoboken, New Jersey. It’s a Thursday in mid-July, and a leading financial newspaper has just run a cover story titled ‘Man vs Machine’, which obsesses over the onslaught of index funds and algorithmic trading that is currently driving the market and bringing turmoil to the $75 trillion asset-management business.

Wixom has just completed a bachelor’s degree in quantitative finance, which required him not only to become Bloomberg-certified as a freshman but also to take a minimum of 14 classes in computer science and advanced mathematics. He is already a wizard at using the lab’s state-of-the-art interactive system, which was designed by Oblong Industries and is used by the likes of IBM’s Watson team and Nasa.
“You can’t just buy growth stocks and expect to outperform anymore,” says Wixom, a native of Vancouver, Washington, who graduated near the top of his high school class and intended to major in electrical engineering. “It becomes a data-science problem. There’s hundreds of hedge funds out there, right? And there’s a few that actually generate alpha consistently—firms like D.E. Shaw and Renaissance Technologies. What do those guys do? They hire quants. They hire data scientists. They hire programmers.”

After summer internships in Schwab’s risk department and as a quant in the investment banking division of Japan’s Mizuho Bank, Wixom accepted an offer at Yewno, an artificial intelligence startup in Redwood City, California. Already working and based in New York City, he is building new financial products driven by machine learning. “If you want to measure a true exposure to a country, maybe you want to measure political unrest, right? We can now build indices by connecting concepts, by measuring the performance of a concept over time. The idea is that you understand what’s driving the markets in the same way that a human analyst does. This is really exciting to me.”

Wixom is one of 32 such quantitative finance graduates in Stevens’s class of 2017. QF, as it is known on the 55-acre campus, is a hot new major—another is cybersecurity—that is helping make Stevens one of the most desirable STEM colleges in the nation. With more than 90 percent of its students securing employment or a spot in graduate school, and placements at employers ranging from Google to Goldman Sachs to Two Sigma to Verizon and Johnson & Johnson, the school has been attracting record numbers of applications even as its median SAT scores have risen by more than 50 points in the past five years. Its admissions rate has fallen to 39 percent in 2016 from 54 percent a decade ago. It ranks 180th on Forbes’s annual list of America’s Top Colleges, up 68 spots from last year.

It’s part of an impressive turnaround orchestrated by Stevens’s president, Nariman Farvardin, an Iranian-born, Rensselaer Polytechnic Institute-trained electrical engineer who has been running the college since 2011. Farvardin’s CV is more than you might expect from someone in charge of a regional tech school. Besides his seven US patents and 150 technical research papers, he has co-founded two companies: A fabless semiconductor firm and a startup that sought to make buildings more energy-efficient. He did all this during his 27-year tenure at the University of Maryland, including seven years as dean of its Clark School of Engineering, four years as provost of the entire university and a spell as acting president. He was recruited to Stevens after the college’s former president became embroiled in a self-dealing scandal that levelled the school’s finances and morale.

Farvardin has streamlined Stevens’s senior management, plucking talent from not only industry but also non-traditional sources like New York City’s Fashion Institute of Technology, where Stevens found its new enrollment czar, Marybeth Murphy, who arrived in 2013 with a mission that included boosting female enrollment (it’s now at 30 percent). Overall undergraduate enrollment is up 28 percent in the past five years, to 3,100. Operating revenues are on the rise, and despite major construction under way all over campus, its endowment has increased to $166 million from $144 million five years ago. Stevens’s debt was recently upgraded by Standard & Poor’s to A–.

“ We can now build indices by connecting concepts, by measuring their performance.

At most tuition-dependent schools, the key to success is filling classrooms with new students every year. For Stevens, the critical factor in its recent popularity amid increasing STEM competition may be Farvardin’s willingness to break free from stodgy ivory-­tower curriculums in favour of creating what are essentially four-year boot camps designed to train industry-specific, technology-savvy specialists.

“We believe very strongly that the role of machines in the future will be far more significant, and perhaps even more significant than the role of human beings. And we want to be the university that is at the forefront of this,” says Far­var­din. “A student in QF at this university takes more courses in mathematics than an engineering student has to. These are very analytical people. They understand finance like the back of their hand. But they are masters of mathematics. And they are very conversant with the basics of computer science.”

The architect of Stevens’s QF curriculum is George Calhoun, a Wharton PhD with a 25-year background running publicly traded technology companies, mostly in wireless. His last post was a stint as the CEO of Illinois Superconductor, where he had been handpicked by hedge fund managers Paul Singer of Elliott Associates and Mark Brodsky, now of Aurelius Capital.

“Stevens benefited from not having a legacy business school. [Academia] is not used to listening to the market and thinking in terms of product development and customers,” says Calhoun, who took the job in 2003 after seeing a small ad in The Economist. “The typical academic model is: ‘I’m a tenured professor. I’ve been here for 20 years. This is the research I do. If you want some of that, you can pay me.’ ”

Calhoun shaped Stevens’s QF programme by talking to the folks in the industry who hire graduates. “I personally probably met 25 companies. I spent two or three hours, a long lunch, with the treasurer of Johnson & Johnson. Plus Honeywell and GE Capital. I asked, ‘What do you need?’”
Calhoun would grill the execs about critical skills, and Stevens’s computer-programming and math-heavy course load was the result. “The two that were always at the top, oddly enough, were Excel and C++. Both ends of the spectrum. And increasingly later on, it was Python,” says Calhoun, referring to a programming language now widely used in back-end web development, data analysis and AI. “The QF programme is not about breeding any one particular narrow type. It’s based on the premise that any job in finance today is a high-tech job. So it can be asset management, trading, risk, audit or insurance.”

Calhoun still teaches QF101, the ­introductory class for quantitative finance majors, in which beating the S&P 500 on a virtual portfolio for the semester will earn you an A on the final. This fall’s class is already filled, with 95 students registered.

As an undergraduate, Dakota Wixom was one of 25 or so students to earn a spot on Stevens’s Student Managed Investment Fund, which has a $400,000 real-money portfolio currently invested in stocks like D.R. Horton, Tesoro, AT&T, Alphabet and Cognizant Technology. In his role as head of risk and asset allocation, he built an app that members could use to screen out overly risky investments. Besides his undergraduate research project on two-stage stochastic programming problems for portfolio optimisation, Wixom also started Quantbros.com and ­Quantcourse.com: The first is an educational website for young quants, the second an online course in which he teaches novices about multivariate regressions using factor analysis and “how to program with ­financial time series” in R, a language geared to ­statistical computing and graphics.

What lessons can investors glean from what’s going in Stevens? The biggest takeaway revolves around how, in a market driven by index funds, portfolio construction trumps securities selection in the long run. To this end, Stevens’s students have been using a model called Black-Litterman, a variant of Markowitz’s Modern Portfolio Theory and Sharpe’s Capital Asset Pricing Model developed in 1990 by the late mathematicians Fischer Black and Robert Litterman. The model basically allows more flexibility in creating return assumptions on various assets.

Systematic rule-based investing is another mantra among Stevens’s budding quants, and Wixom’s personal algorithm-driven portfolio on Quantopian.com attempts to profit from the inevitable buy-sell order flow that results from the rebalancing of stock indices.

Calhoun adds that one of the lessons his Stevens students learnt the hard way is to constantly question widely accepted market practices. He cites the China-induced stock market flash crash of August 2015. Because of “prudent” governance rules set up by its alumni-advised investment committee, Stevens’s student-run fund was forced to maintain stop-loss rules on its stock portfolio, and, as a result, it sold out nearly all its holdings during the sudden dip, at a big loss. “It just destroyed our portfolio for a few weeks there,” Wixom says. “It’s the traditional investing methods. We were kind of struggling with them.”