Corey Lieblein resuscitated the Victrola brand and made a killing in, yes, record players 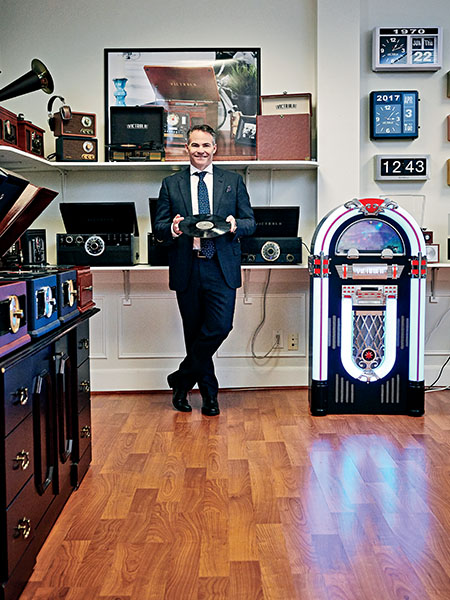 Corey Lieblein isn’t exactly old-fashioned. He lives in a Long Island, New York, home with mid-century modern decor, and he named his company Innovative Technology in a nod to the electronic gadgets he’s been selling since 2003. Yet the best business decision he ever made was buying a 112-year-old record-player brand: Victrola.

Three years ago, Innovative Technology was doing $60 million in annual sales, a little over half of that coming from a burgeoning business peddling generic turntables through retailers like Sam’s Club and Kohl’s for as little as $49.99. But Lieblein longed for a brand identity that would resonate with consumers. So he purchased the defunct trademark for Victrola, one of America’s first manufacturers of record players, paying “deep into the six figures”. “It was the juiciest cherry on top of the most decadent sundae,” says the trim 46-year-old with Mitt Romney hair. “Now we had the most historically rich brand on planet Earth.”

Though Lieblein—a consummate salesman who’s hawked everything from DVD players to women’s clothing—is prone to exaggeration, vinyl’s comeback has been impressive. After nearly spinning into oblivion, LP sales have increased for 12 straight years, leaping 9 percent to 14.3 million in 2017. That’s 14 percent of all non-digital album sales, a small slice of the physical category that is still dominated by the declining CD format, but last year’s vinyl sales were the highest since Nielsen started measuring in the early 1990s. And they’re still growing, says David Bakula, senior vice president of industry insights at Nielsen: “From a mass-merchant standpoint, you see them all the time in places like Urban Outfitters, Target and Walmart.”

Lieblein’s products can be found in those places and ­beyond—including in the foyer of his headquarters in Port Washington, New York, where suitcase turn­tables gleam in chrome and ruby red (the ’50s Retro model) across from creaky wooden music players (the Aviator) that look more likely to be found at a garage sale than a shopping mall.

Privately held Innovative Technology, which employs about 50 full-time plus another 50 or so sales contractors, now does $100 million in annual revenue, roughly 80 percent of which comes from Victrola-branded units. And it’s been profitable for 15 straight years. According to the research outfit NPD Group, that makes Lieblein’s company the world’s top seller of record players. Though audiophiles may prefer high-end European options that can run north of $100,000 per unit, Lieblein has more room to run with casual listeners at his lower price point. “As kids go out of college dorms and they’re buying their first homes or renting, I see more of those things becoming a part of the house,” says Caren Kelleher, founder of pressing plant Gold Rush Vinyl in Austin, Texas. “It sends a signal of cool.”

Back in 2003, says Lieblein, “if someone had told me I’d be the market leader in turntables 15 years later, I probably would have laughed”

Lieblein’s résumé includes a gig as a retail analyst with Saks Fifth Avenue right out of college and a stint selling women’s private label sportswear in New York’s Garment District. Then he moved back to Long Island and started a company called Residue Worldwide that traded in raw plastic. One month, two customers filed for bankruptcy, leaving him $60,000 in the hole. He got out of it by lining up a deal to flip 50,000 wholesale DVD players to a friend at a big-box retailer. When the sale went through, Lieblein decided he’d found his calling and jetted off to Hong Kong, where he discovered a supply-chain-management company that helped him source electronics from Chinese factories. And thus Innovative Technology was born.

Lieblein picked the name mostly because he liked the abbreviation. (“Like, I’ve got IT,” he says. “You’ve got to have IT.”) He rented a 5-by-12-foot office in his father’s Port Washington building for $1,000 a month. “I started the company,” he says, “with one client and one item, sitting in a room by myself having no idea what the hell I was doing”.

He began selling record players after he chanced upon a turntable-CD-cassette combo unit while walking through a trade show in China. Enamoured of the old-school look of its wooden cabinet, he began carrying the item in 2004, later adding a vinyl-to-CD transfer feature at the request of a customer. As sales increased, he started to think about the old Victrola his father had owned, and he tracked down the brand’s patent holder.

After the acquisition, Lieblein began slapping the long-dormant name on his turntables, imbuing them with a vintage feel but making no changes to the components. He promised his retailers the brand shift wouldn’t result in higher prices—just greater demand, which is what happened.

Not all of Lieblein’s ideas have worked. Five years ago he launched Golden Solutions, a line of electronics marketed to senior citizens (telephone amplifiers, high-frequency headphones) but couldn’t find a way to market them. Two years ago he came up with Bright Tunes, which called for tiny Bluetooth speakers to be mounted on strings of decorative lights, enabling users to turn a Christmas tree into a boom box, but he says customers were reluctant to pay more than $10 for tree lights. “I’m not afraid to fail,” Lieblein says.

Still, by 2015 he found himself limited by the constraints of being an independent small business. In the ramp-up to the holidays one year, he had $6 million in the bank and $7.9 million in payables, necessitating some acrobatic short-term borrowing. “I said, ‘This is sheer insanity—I should be focusing on how to grow my business, not how to finance the business’,” he says. “At that point, what I wanted to do was find a financial partner.”

Two years ago RAF Industries, a Pennsylvania-based private equity firm, came calling. RAF tends to hold positions in portfolio companies for 15 years instead of gutting and flipping them, which Lieblein liked. So he sold a majority stake—he won’t say exactly how much or what he got but notes that he still owns “a significant portion”. With RAF on board, Lieblein was able to undertake pricey projects like revamping his inventory management systems. “The decision to do a deal with Corey was a no-brainer,” says Rick Horrowitz, RAF’s president. “We aim to partner with talented, driven and passionate entrepreneurs leading high-growth companies that have differentiated products or services and meaningful brands. Corey and Victrola exemplify this.”

RAF seems to be betting that Lieblein can—somewhat ironically—continue to expand sales of his analog products through digital channels. His ecommerce sales grew from $3 million in 2015 to some $30 million last year, aided by the poaching of a VP from Brookstone.

Count Lieblein among those surprised by his trajectory. Back in 2003, he says, “if someone had told me I’d be the market leader in turntables 15 years later, I probably would have laughed.”

Tweets by @forbes_india
The truth about lies in negotiations
We're the first insurance company to be fully on cloud in India: Kamesh Goyal