According to the National Venture Capital Association, 86 percent of investment partners in U.S. VC firms are men. That puts women seeking capital at a disadvantage 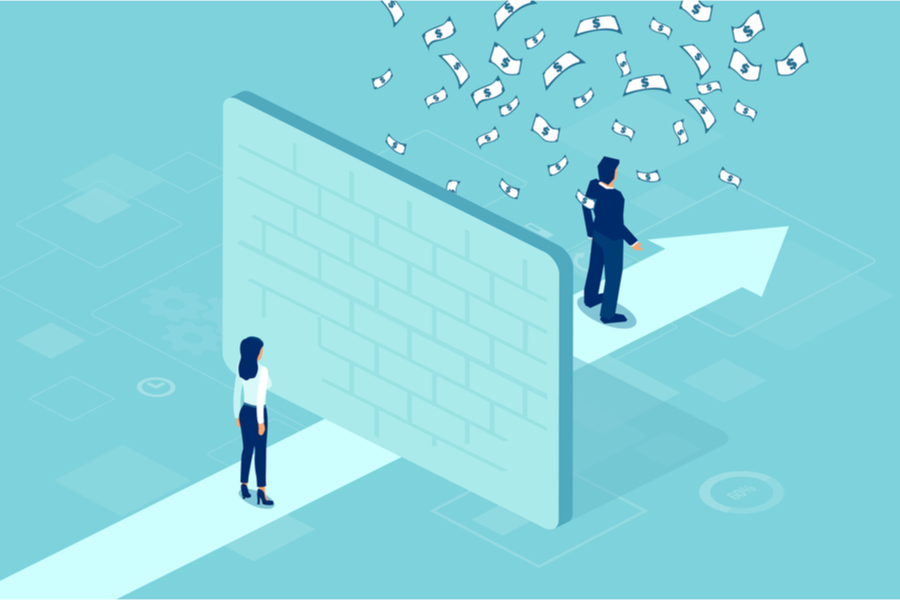 
When Leah Sparks (MBA ’01) was raising venture capital to scale Wildflower Health Inc., she expected gender bias from a few male investors. What she didn’t expect, however, was that her startup, a San-Francisco-based mobile health care technology firm targeting the needs of pregnant women, would be perceived as lacking growth potential. “We were focused on reducing the $100 billion of pregnancy costs,” said Sparks, “so we were completely blown away when investors thought this was a ‘niche market.’”

Sparks’ argument that women constitute half of the population — and make 80 percent of health care decisions — fell on deaf ears. “One venture capitalist,” recalled Sparks, “said that he never invested in anything he couldn’t personally use, and that he’d never get pregnant.”

Fundraising While Female
Last year, female-only founding teams garnered a scant 2.3 percent of the total venture capital invested in startups, according to PitchBook. So, what causes such funding disparity? Professor Elena Loutskina, an authority on banking, securitization and venture capital, says that one reason is a lack of diversity in the VC sector.

According to the National Venture Capital Association, 86 percent of investment partners in U.S. VC firms are men. That puts women seeking capital at a disadvantage. “Male investors prefer to fund men, because they can relate to them,” said Loutskina. “Nurturing a new business is like raising a baby, and VC investment is fundamentally about a relationship. There must be a high level of trust and comfort between the parties.” Many traditional venture capitalists, according to Loutskina, feel more comfortable working through the challenges of growing a venture with someone who reminds them of their younger selves.

Another daunting obstacle for women is access to the venture capitalists. Raising capital has a lot to do with the founders’ networks, according to Loutskina. “Investors won’t listen to just any pitch,” she said. “They get deal flow from the people they know, and most women don’t have the networks that male founders do.”

Expanding Access to Capital
There are signs that the story of venture capital is changing. Some VC firms are deliberately agnostic about gender and founders’ backgrounds, focusing solely on ensuring that capital flows to the most viable companies. For example, Village Capital, which runs accelerator programs for social-impact ventures, uses a peer-selection investment model. At the end of every Village Capital program, startups evaluate each other based on a number of “investability” criteria and decide which two among them get funded.3

According to Village Capital, entrepreneurs using the peer-selection model are more likely to back women than is the VC sector as a whole. In the current portfolio of Village Capital’s companies, 46 percent were founded by women.

Professor Saras Sarasvathy, an authority on high-performance entrepreneurship, takes a big-picture view of what holds women back, and not just in raising capital. “Some of it is a problem of history — what I call ‘historical arithmetic,’” said Sarasvathy. “We still have less than 7 percent of female CEOs in Fortune 500 companies.”

But as women continue making progress in male-dominated sectors, breaking barriers in science, technology and engineering, they are literally making history, according to Sarasvathy. Once women hit a critical mass in leadership positions, then it gets easier for women everywhere. “And as more women succeed as founders," said Sarasvathy, “they become new data that prove women can build high-growth companies, even when they have children to raise. And VCs are all about data."

Being Tactical and Persistent
In the meantime, Sarasvathy says that women should be more tactical about raising capital from male venture capitalists. “Don’t assume that everyone’s biased,” she said. “Sometimes it’s just that they’ve never dealt with female founders and simply don’t quite know how. Be persistent and push back.” She recalled that when she was rejected for a bank loan to fund her venture a few decades ago, the loan officer told her that there was nothing wrong with her business plan. “He said, ‘I believe a woman doing manufacturing is risky.’ And I didn’t just walk out, because I still needed to know how to get that loan. And he told me that I had to get a male co-founder. And I did. That’s what it took in the ‘good old days.’”

The founders of Wildflower Health had to change their tactics a few times before they raised their initial funding round. “At first, Kathy and I pitched together,” said Sparks. “Then we decided that ‘two blonde moms’ walking into a VC pitch room was setting us up to be instantly stereotyped.”

They also initially cast an extremely wide net, approaching more than 50 Silicon Valley investors, who weren’t necessarily the best fit. “Eventually,” said Sparks, “I closed that round with a strategic investment arm of a large health plan and a small private fund. Health care investors had a better understanding of what we were doing and were more aligned with our business model.”

Sarasvathy is optimistic about the future. Her female students, the majority of whom are in their 20s, have different expectations than previous generations of women. “They have a lot of chutzpah,” said Sarasvathy, “and sometimes my stories make them mad, and that’s great. Today, women are everywhere, and they are fighting more. That’s why I feel that the wheels of history are turning, however slowly.”