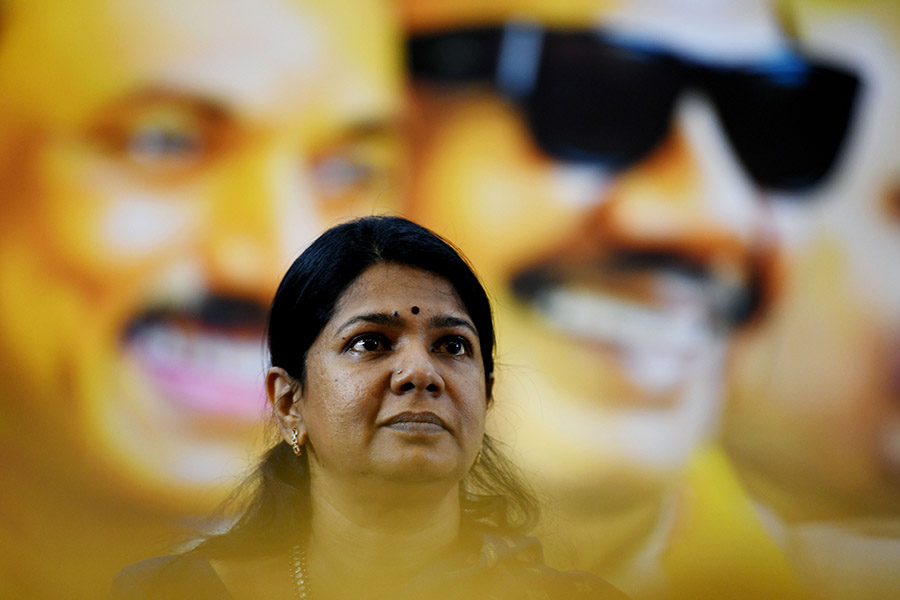 M. Kanimozhi, women's wing secretary of the Dravida Munnetra Kazhagam (DMK) party and daughter of late DMK leader M.Karunanithi, looks on during the party's manifesto release for the forthcoming general election at the party's headquarters in Chennai on March 19, 2019.
Image: Arun Sankar/AFP/Getty Images

“There is no doubt that Kanimozhi will win in Thoothukudi, but since the BJP is leading at the Centre, the chances of her landing a cabinet ministry are low. What’s the point of a government vehicle if there’s no siren?” says a DMK worker outside Kanimozhi’s home in Thoothukudi’s Polepettai locality, on condition of anonymity. At the time of filing this report, the DMK-Congress combine was leading in 37 of 38 Lok Sabha seats in Tamil Nadu. The DMK party office in the port town already has people referring to Kanimozhi as ‘MP’.

Thoothukudi (also known as Tuticorin), located about 600 km from Chennai, is an economy that runs on shipping, fishing, salt pan, chemicals, copper and agricultural industries. All the candidates fielded belong to the Nadar community (Kanimozhi’s mother Rajathi belonged to this OBC caste), which is dominant in the coastal constituency. There is also a sizeable Muslim and Christian population.

Thoothukudi, with a population of 4.41 lakh as per the 2011 census, is seeing an anti-incumbency wave against sitting MP Jeyasingh Thiyagaraj Natterjee of the All India Anna Dravida Munnetra Kazhagam (AIADMK). One of the main reasons for this loss of favour, according to people, is the party’s inability to handle community protests against Vedanta-owned Sterlite Copper in May 2018. The 100-day anti-Sterlite movement had culminated in a police firing on protestors who demanded permanent closure of the company’s copper smelter plant, killing 14 unarmed civilians.

While the BJP’s alliance with the AIADMK seems to weigh the party down, Tamizhisai’s campaign has been focussing on anti-corruption and development, which, the BJP state president has said, is part of her “vision document” for her hometown. Vicky, an AIADMK-BJP combine worker, says that even if the DMK might win the Lok Sabha elections, the two Thoothukudi district MLA seats are theirs. “Tamizhisai madam was banking on the Hindu votes and was driving the Hindutva agenda, but the anti-Sterlite movement cost us votes.”

For the people of Thoothukudi, Election Results Day is business as usual. “Every politician is same. Be it Kanimozhi or Tamizhisai, everyone is just here for votes,” says Raju, an auto-driver standing outside the DMK party office. “The only advantage Tamizhisai has over Kanimozhi is that she is from Thoothukudi, whereas Kanimozhi is still seen as an ‘outsider’ by many. Let’s hope that she will work more closely with and for people if she wins.”

The other issues faced in this constituency include the cottage industries hit by demonetisation and GST, and lack of development. Many people have also lost their jobs after the shutdown of the Sterlite plants and other local factories.

Kanimozhi has been laying the groundwork in Thoothukudi even before her nomination by visiting families of the anti-Sterlite shootout victims and participating in about 60 gram sabha meetings. Her campaigning has focussed on picking up the economy after demonetisation and GST, apart from scrapping the National Eligibility Cum Entrance Test (NEET), which will usher in quota in private colleges for medical admissions. Geetha Jeevan, district secretary for the DMK in Thoothukudi North and the sitting MLA of the constituency, said to mediapersons gathered at the party office: “We will make the BJP lose their deposit here. We are only working with that aim."