The CAT and IIM Equation 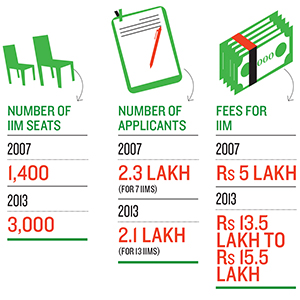 We are in the middle of CAT season, where 2.1 lakh candidates are taking the test between October 11 and November 6 for admission to the Indian Institutes of Management. The number of applicants is higher than that of the past two years—2.04 lakh in 2010, and 2.05 lakh in 2011—but is less than that of 2007 (2.3 lakh).

The increase is due to the implementation of 27 percent reservation, which saw seats increase by 54 percent. Higher fees have resulted from infrastructure costs, and a waiver granted to financially weak students (those not admitted under reservation).

Tweets by @forbes_india
Snapshots of the Fortnight (September28 - October09, 2012)
Are Investors Wrong in Assuming the Worst is Over?