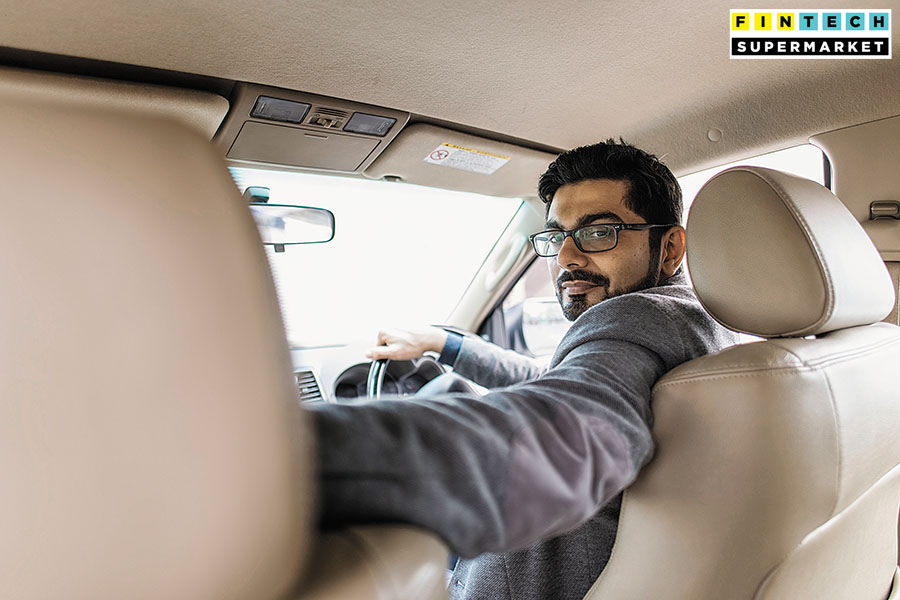 Varun Dua, CEO, Acko General Insurance
When Varun Dua bought his first insurance product at the age of 24, he was working at Tata AIG Life Insurance and had plenty of recommendations to make an informed decision. “Unlike the typical startup story—I found it very difficult to find a house so I built it—I didn’t find it difficult to buy insurance. I think I was very evolved about it,” says the founder of Acko with a laugh.

Acko General Insurance, the first fully digital insurance firm in India, came about from his wanting to switch from financial services to technology. After four years at Tata AIG and a brief stint at Franklin Templeton Investments he set up a software firm in late 2010 with ex-IITian Devendra Rane that helped insurance companies build their online portfolio. It was a sector he knew, and where he saw a gap. “We both saw a niche, and thought let’s figure it out together. Insurance companies were struggling, the large software companies servicing the insurance companies don’t really know what’s going on—this was our view. And that we could do a much sharper job of it. And that proved right to a large degree,” says Dua, 36.

By 2013 they had scaled well but were also thinking about where the next phase of growth could come from. Since they had worked on integrating with insurance systems, they realised they could get customers to buy policies online. The duo in 2014 decided to flip the business to online insurance broking firm Coverfox. “Though PolicyBazaar had been there since 2008, at that point they were largely generating leads for insurance companies, not fulfilling the product. We saw that as an opportunity, saying the full transaction can happen here, and applied for a brokerage licence.”

The company caught the eye of investors and, by 2016 Dua started looking for the next problem to solve. He had solved “the traffic problem and the buying problem” but not, he says, the pricing problem. He started working towards better pricing with some of the younger insurance companies, but it was slow going and he became increasingly convinced that he would have to manufacture the products himself. The next step was to tell his investors of the plans. Since a broker cannot also be an insurer, he would have to create a separate company. Some of the investors at Coverfox also came on board, and Acko in May 2017 secured $30 million in a seed round.

Dua got licences for Acko last October and went live with the first products this February. The idea, he says, was to simplify insurance end to end with technology—from pricing a product based on individual risk profiles, to buying a policy, to claims. Acko started with auto insurance; it now has a mobile insurance tie-up with Amazon as well as one with online cab aggregator Ola where a customer is insured against missed flights and accidents at Re 1 per ride.

Because Acko is online-only and interacts with customers directly, costs are lower. It can also use data analytics to offer cheaper prices to customers based on their risk profile. “What’s happening is, customers who should be paying a lot more are paying a lot less and those who are paying a lot less should be paying a lot more. We should ensure that we use data, ask customers questions or figure out who’s a good driver, a bad driver, what’s the kind of usage of the car and give them much lower prices. The idea is to give better or safer or less usage drivers low prices on their cars compared to someone who is driving 50 km a day on the highway.”

“Today we get products that are ‘one-size-fits-all’. Acko is reimagining the insurance industry by using data to price the risk better. Specifically, Acko is in a better position to customise products using customer data, manage customer experience by tightly controlling distribution, and offer innovative products relevant to the digital age,” says Abhinav Chaturvedi, principal at Accel, which invested in Acko along with Saif Partners and others.

Technology also comes into play with Ola Insurance, where a person doesn’t need to even call the company—everything happens from the app and missed flight claims are settled within 24 hours. Acko, in the last three to four months, “has covered rides in millions”, says Dua. It is aiming for `150 crore in premiums by the end of the first year, and over the next three years Dua is looking at between `1,000 and `2,000 crore. “Next year we will be looking at almost a 5x jump,” he adds.

The tie-up with Amazon, which led a $12 million funding round in Acko this year, covers mobile phones.

According to Sachin Seth, partner-digital, fintech and innovation leader, advisory service, EY India, India accounts for less than 1.5 percent of the world’s insurance premiums and about 2 percent of life insurance premiums, despite being the second-most populous nation. India’s $60 billion insurance market is expected to quadruple over the next 10 years.

“India’s general insurance industry is projected to grow the fastest globally, owing to economic growth and higher personal disposable incomes,” says Vivek Mathur, MD, Saif Partners, which sees a huge opportunity for digital insurance.Toffee: The Bite-Sized Insurer
Yes, you have health insurance, but will it cover a bicycle fall? Rohan Kumar, an avid cyclist, asked himself the question when he was developing products for his startup, Toffee Insurance, last year. 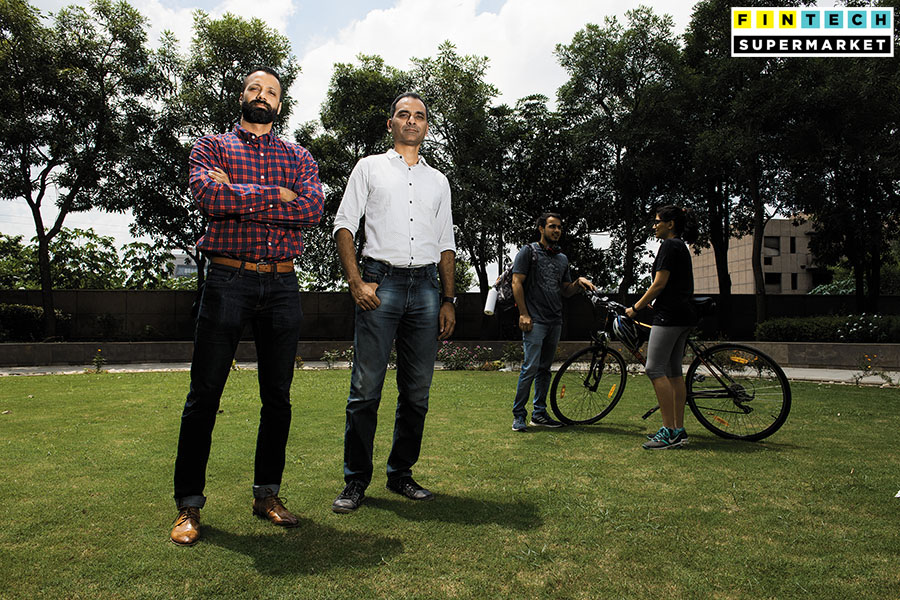 Rohan Kumar (left), CEO, and Nishant Jain, chief product officer, Toffee Insurance; Image: Amit Verma
“In about seven years I have not used my health insurance even once, and I have spent a ridiculous amount of money going to doctors whether it’s for my kids, for day care, for general stuff. I go cycling in Gurgaon, have fallen off my bike many times but could not claim anything for that,” says Kumar. Toffee provides small-ticket insurance for mundane activities like a daily commute, for illnesses like dengue, for fitness activities and for home renters. The idea is to make insurance relevant to a young audience who might not be thinking about cancer or heart disease; and to make it as simple as buying a commodity, and pricing it accordingly. “What we said was, instead of having a cumbersome feature-heavy product, we could pull out a couple of feature sets and create a complete product out of that. Like say, dengue insurance, which will cover you only if you have dengue. There is no other rider, so it makes it easy and focussed for people to understand,” says Kumar, 39, CEO & co-founder of Toffee, adding that decision-making is also faster for a ₹600 product than for a ₹5,000 product.

It all started when Kumar and co-founder Nishant Jain, 45, who then ran a design and product strategy consulting firm, were approached by Apollo Munich to work on their online platform. Their research threw up several learnings: That most products were one-size-fits-all; that they were mostly designed for an offline channel keeping an agent in mind; and that no one was targeting the under-32 year old customer.

The duo went back to Apollo Munich with their findings in November 2016, pointing out an opportunity, but realised the insurer had other priorities. Seeing it as a chance too big to miss, the two decided to do it themselves. After applying for an intermediary licence, they set up the company in August 2017, with a beta launch in December and finally launching their products this April. They currently have tie-ups with seven insurance companies, based on their digital capability to integrate with their platforms and create products with them, based on their approvals.

“We built this platform from the back-end with the claim system that runs various algorithms to mitigate fraud. We had taken pre-approvals from the insurance company to say if your claim is under ₹5,000 we can approve it instantly without getting an approval for them,” says Kumar, adding that the company is on target to hit about 1 lakh policies by end of the current financial year.

“Toffee is focussed on ensuring that people begin to see insurance as a risk mitigation solution. It is simplifying insurance and positioning it as a simple, fast moving consumer good rather than a complex financial product that requires education from an agent in order to understand,” says Anuradha Ramachandran, investment director, Omidyar Network.

Toffee raised $1.5 million in a seed funding round led by Kalaari Capital, Omidyar Network and Accion Venture Lab this May, which will help them build their technology platform “to the level where if I start to see half a million policies being put through the system, it is robust enough to handle that kind of volume as well as be able to go deep into the data and bring out that intelligence we need for additional sells and cross sells and understanding the consumer,” says Kumar.