Cinemas were shuttered back in March 2020 in a strict lockdown when the pandemic first hit. Now the Covid-battered theatres are trying to lure the audiences away from the booming OTT services 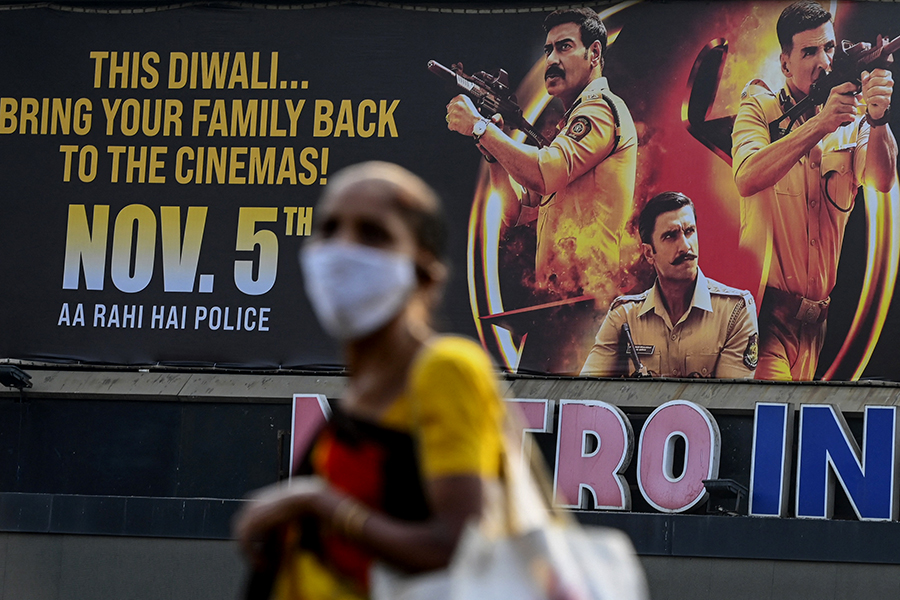 Bollywood action flick "Sooryavanshi" kicks off a slate of holiday season blockbuster releases on Friday as India's Covid-battered cinemas try to lure audiences back into theatres and away from booming online streaming services.

Cinemas were shuttered back in March 2020 in a strict lockdown when the pandemic first hit, enjoying a brief reprieve before closing again after a massive virus surge in April.

India's media and entertainment earnings fell by a quarter to $18.7 billion last year, according to accounting firm EY, and most multiplex chains suffered major losses.

But the industry is anticipating a rebound with theatres now back in business across the country, most recently in Bollywood capital Mumbai.

Delayed since the start of the pandemic, Kumar stars as an anti-terrorism chief working to stop an attack in Mumbai.

Its performance at the box office will be seen as a litmus test of whether audiences will flock back to cinemas in the world's most prolific movie market.

"The buzz is also very good."

India is currently celebrating Diwali, the country's biggest Hindu festival and traditionally what film distributor Akshaye Rathi said was a "very lucrative time" for the sector.

"Traditionally it's when the biggest films release," he told AFP.

Also debuting this week will be "Eternals", the latest instalment in Hollywood's Marvel franchise, and the colourful drama "Annaatthe" featuring Tamil superstar Rajinikanth.

Fans excited about "Annaatthe" sprayed milk on posters displaying Rajinikanth's face in Tamil Nadu's Madurai city on Thursday as a sign of respect for the actor, who inspires an almost god-like adulation in the state.

As the industry gets back on its feet, India's largest multiplex operator PVR is also opening an open-air, rooftop drive-in cinema—pegged as a world first—in Mumbai on Friday.

Film trade analyst Komal Nahta said there was a "massive backlog" of films worth an estimated 50 billion rupees ($668 million) in production costs.

"We will have at least one major film released every week," he added.

"In 2019-20 we estimated ($40 million in) box office numbers, which was pre-Covid days," said Shibasish Sarkar, the former chief of Reliance Entertainment and current chair of media firm IMAC.

"For the coming releases, we hope (and) wish for the best."

In a country where going to the movies has long been a central fixture of cultural life, the pandemic's theatre closures prompted a surge in subscriptions to streaming platforms.

US giants Netflix, Amazon's Prime Video and Disney's Hotstar have rushed to tap into the growth in online audiences as smartphone adoption rises.

But Jyala of INOX said cinema owners were unfazed by the competition.

"People are coming back to theatres... and there are several more big titles in the pipeline," he added.