Japanese anime has problem with women and girls: Mamoru Hosoda

Hasoda, Japanese filmmaking master and a father of a young girl himself, wants to empower her generation to take control of their digital destinies rather than cower in fear 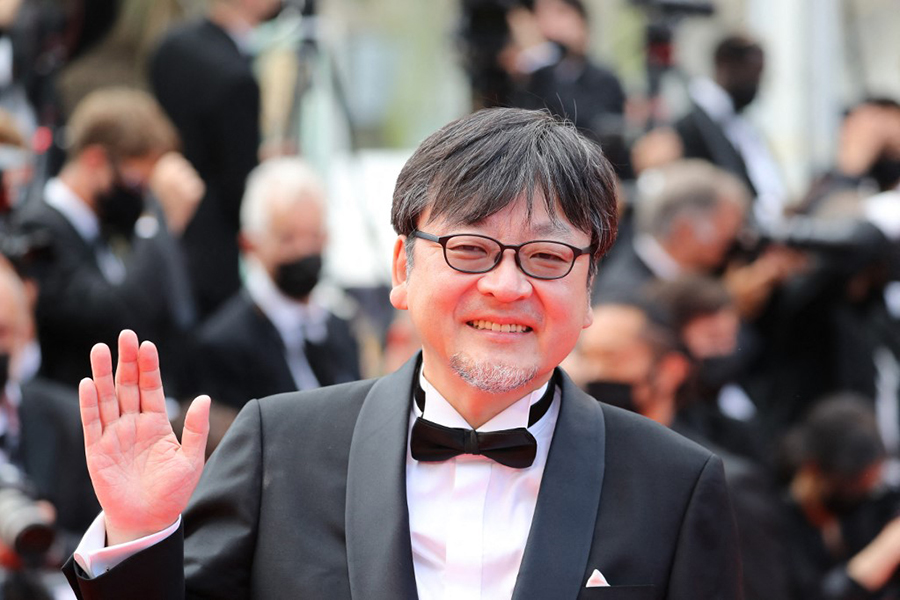 Japanese animation director Mamoru Hosoda arrives for the screening of the film "France" at the 74th edition of the Cannes Film Festival in Cannes, southern France, on July 15, 2021
Image: Valery HACHE / AFP

Mamoru Hosoda has bones to pick with both Steven Spielberg and Hayao Miyazaki, the other great Japanese animator to whom he is often compared.

The dystopian tropes about the net that run through so many movies, including Spielberg's "Ready Player One", are not doing anyone any favours, particularly women, Hosoda told AFP at the Cannes film festival, where his latest feature "Belle" is premiering.

Father of a young girl himself, the Japanese master wants to empower her generation to take control of their digital destinies rather than cower in fear.

"They have grown up with the net... yet are constantly told how malevolent and dangerous it is," he said.

"Belle" is his riposte, a spectacular dive into the rollercoaster emotional life of a shy adolescent girl called Suzu, in a 21st century take on "Beauty and the Beast".

Digital diva
To her surprise, and everyone else's, Suzu becomes a pop diva called Belle in the virtual universe of an app called U.

Rather than being burned by online abuse and harassment as she acquires billions of followers, Suzu uses her online avatar to overcome the haters and her own hang-ups.

"Human relations can be complex and extremely painful for young people. I wanted to show that this virtual world, which can be hard and horrible, can also be positive," said Hosoda.

Suzu and her computer geek friend are far from the women that usually populate Japanese anime—which is where Hosoda takes issue with Miyazaki, the Oscar-winning legend behind classics such as "Spirited Away".

"You only have to watch Japanese animation to see how young women are underestimated and not taken seriously in Japanese society," he said.

The director—whose films are more grounded in social realities than Miyazaki's—was brought up by a single mother, a rarity at the time.

His 2012 classic "Wolf Children" is a paean to the fierce independence with which she brought up her little pack alone.

"It really annoys me to see how young women are often seen in Japanese animation—treated as sacred—which has nothing to do with the reality of who they are," Hosoda said, with evident frustration.

Miyazaki bust-up
Without naming Miyazaki, Hosoda was unsparing about the Studio Ghibli founder.

"I will not name him, but there is a great master of animation who always takes a young woman as his heroine. And to be frank I think he does it because he does not have confidence in himself as a man.

"This veneration of young women really disturbs me and I do not want to be part of it," he insisted.

He wants to free his heroines from being paragons of virtue and innocence and "this oppression of having to be like everyone else."

Hosoda and Miyazaki have history.

The 53-year-old was seen as the natural successor to Miyazaki after he was called in from the outside by Ghibli to direct the Oscar-nominated "Howl's Moving Castle".

But Hosoda walked out midway through to set up his own studio.

The director prefers stories that "show the good and the bad in people. This tension is what being human is all about."

Which is why he was also drawn to bringing "Beauty and the Beast" up to date.

"In the original story the Beast is the most interesting character. He is ugly and has this violence but he is sensitive and vulnerable inside too.

"Beauty is just a cipher. It is all about her looks. I wanted to make her as complex and rich."

That duality is also there in his fascination with the digital world that began with his first hit, "Digimon: The Movie".

"I keep returning to the internet. First with 'Digimon' and then with 'Summer Wars' in 2009 and now again."

And he is more convinced than ever that we cannot keep dismissing it as the source of all evil.

"Young people can never separate themselves from it. They grew up with it. We have to accept it and learn to use it better."

Tweets by @forbesindia
IPO Frenzy: Loss-making Indian tech startups are emulating their US counterparts, but that's not enough
Photo of the day: Water under the bridge