In the lanes of Hong Kong, Tim Ho Wan has built itself a world-class reputation, and a loyal fan base 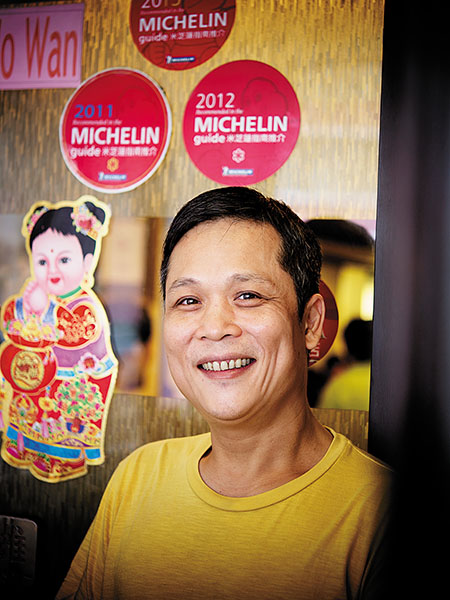 It looks like another common eatery on Fuk Wing Street in the Sham Shui Po neighbourhood of Hong Kong. Its patrons are casually dressed in sneakers, jeans and T-shirts; a few are seated on red plastic stools, while others stand, reading from a yellow single-page menu and ticking off the dishes they want to order for takeaways; some wear waterproof jackets, while others carry umbrellas since the weather forecast predicted rain for the day.

I look at the signage on the left, which reads ‘Tim Ho Wan’. You wouldn’t expect a Michelin-starred restaurant to have this kind of a vibe—far removed from the snobbish, impeccably dressed guests who follow every restaurant protocol to the tee.  Yet, Tim Ho Wan has carved its own niche by becoming one of the cheapest Michelin-starred restaurants in the world. A typical meal for one person, which would include tea, steamed dumplings, a deep fried dish, steamed rice and a dessert, would cost, approximately, `774.

This success story started in Kowloon’s bustling Mong Kok district when co-founders chefs Mak Kwai Pui (56) and Leung Fai Keung (59) opened the first Tim Ho Wan in 2009. Shortly after opening its doors to customers, the restaurant earned a coveted Michelin star in the 2010 Hong Kong and Macau Michelin Guide. There are six Tim Ho Wan restaurants in Hong Kong, all of which belong to the Tim Ho Wan Group. Today, there are more than 50 of these restaurants, with the same name, around the world, including in Taiwan, Japan, Singapore, Philippines, Malaysia, Australia and the United States. The ones outside Hong Kong have been franchised to different partners.

Each restaurant delivers on the brand’s promise of taste and affordability. I am about to experience both as I seat myself inside, and am promptly given the same yellow menu as the patrons waiting outside for their takeaways. The menu is divided into segments such as ‘steamed’, ‘deep fried food’, ‘steamed rice’, ‘congee & snack’, ‘vermicelli’ and ‘dessert’. I tick a few dishes to order and give the menu back to the server. I am accompanied by Fred Cheung from the Hong Kong Tourism Board, and over copious amounts of Pu-erh tea during the meal, I learn that Tim Ho Wan means to ‘add good luck’ in Chinese. Although the chefs were confident of their culinary skills when they started the restaurant, an auspicious name is always good to have. 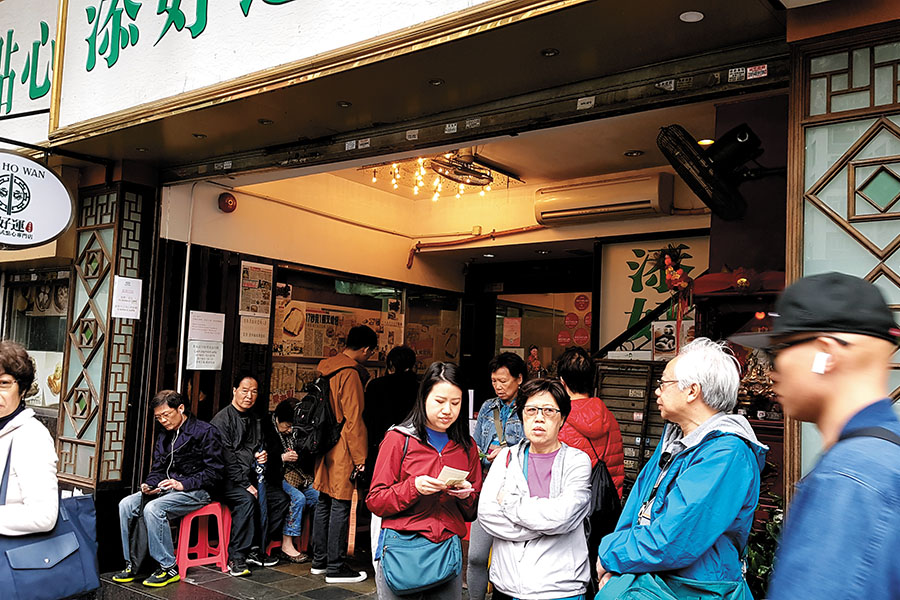 And it’s worked rather well, going by the crowds of patrons and loyal fans of the brand. My dishes arrive in less than 10 minutes of ordering, the same time it takes for takeaways. I savour the famous dim sums of steamed rice rolls, and move on to the steamed egg cake that is made of simple ingredients including egg, sugar, flour and custard powder. I am so caught up in relishing the soft, moist and perfectly blended egg cake that I almost miss the unassuming man in a yellow T-shirt standing next to us. “This is chef Mak,” says Fred, as he introduces us.

As the dishes are passed around on the rotating glass tabletop, the delicious bursts of flavours, textures and aromas engulf me. “The steamed rice roll takes the longest to cook, because its preparation includes grinding rice into a fine juice, before spreading the juice on a steaming cloth to cook. All the steps are done fresh in the kitchen,” explains Mak in Cantonese, which Fred translates into English for me.

The glutinous rice dumpling is the quickest to make, since the rice and other ingredients are wrapped in lotus leaves beforehand, and the dumplings are steamed and cooked on order. The recipe is a traditional one, with stuffings of chicken, pork, sausage, mushroom, oyster sauce put into balls of glutinous rice, and wrapped in sun-dried lotus leaves that lend a distinct flavour.

The question uppermost in my mind is how the founders manage to keep the price of the dishes so low despite rising costs. “We don’t use extravagant ingredients. In this way, our prices are pocket-friendly and this helps attract bigger crowds and generate better traffic. With good traffic, our ingredients are consumed fast, and as a result always remain fresh,” explains Mak, who was both surprised and humbled when Tim Ho Wan was awarded a Michelin star. For him, the recognition from the world-renowned Michelin Guide was a big boost to his vision of serving quality food at affordable prices. 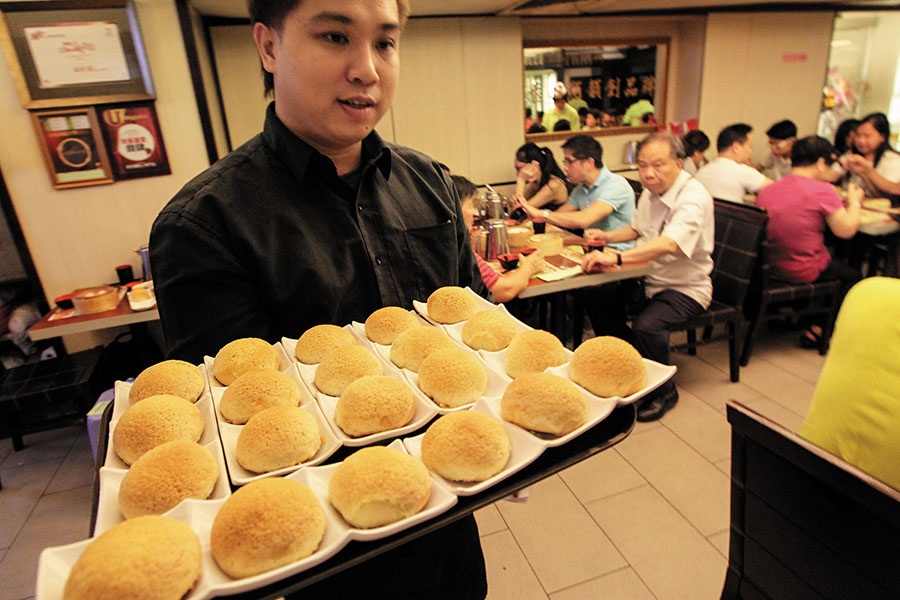 To ensure consistency and quality across the different branches of the restaurant in Hong Kong, all ingredients are centrally procured, the ones that are sourced locally as well as the ones imported. Ingredients such as flour, corn flour, chicken, beef, pork and shrimp are imported. So the flour and pork used for the baked buns with BBQ pork are imported, as are flour and shrimp for the top selling Cantonese steamed shrimp dumplings. In keeping with the brand’s principle of making fresh food that is made to order, the centrally sourced meat and vegetables are delivered daily to Tim Ho Wan restaurants across Hong Kong.

The menus of all the Tim Ho Wans are largely the same. The challenge of maintaining quality and flavours across the outlets is dealt with the requirement that all Tim Ho Wan head chefs need to have previous dim sum experience. This is followed by a month-long training session in Hong Kong. Mak also regularly visits the outlets abroad to ensure the flavour and quality of their dishes.

There are challenges, however, in getting and retaining manpower. “Since few people are eager to join the catering industry, whether as chefs or waiters, the insufficient supply of talent puts pressure on the operations and expansion of restaurants,” says Mak.

Getting nostalgic about the early days, Mak recounts how he and chef Leung would personally buy the ingredients from the wet markets in Kowloon because Tim Ho Wan was still a small-scale business. As it did well and began to expand, centrally procuring the ingredients to maintain consistency in flavour and quality became a prerequisite.

As I listen to Mak, I keep tucking into the spread, while sipping Chinese tea. As I wolf down my stir-fried noodles with soya sauce, Mak excuses himself to cater to the large number of guests waiting to be served.

“There are more orders for lunch as compared to dinner because of the dining habits of the Chinese,” explains Fred. “For dinner, people prefer to have a fuller meal with main courses and they usually gather with family and friends. Lunch is a light meal, and dim sums are considered light meals in comparison to dishes like roasted meat and rice. Hence more people opt for dim sums for lunch than dinner.”

For dessert I order the intriguing Tonic Medlar and Petal Cake. Thick, orange, transparent, diamond-shaped goodies arrive, the Chinese flowers visible inside them. I polish off what’s on my plate, and have no room left in me to try the Pan-fried Walnut Cake or Sweet Pumpkin Cream with Sago. By this time, Mak is back and invites us into his kitchen, which dishes out a baked BBQ pork bun every 17 seconds, courtesy the high level of sync between the chefs at work. It’s an offer I can’t refuse. 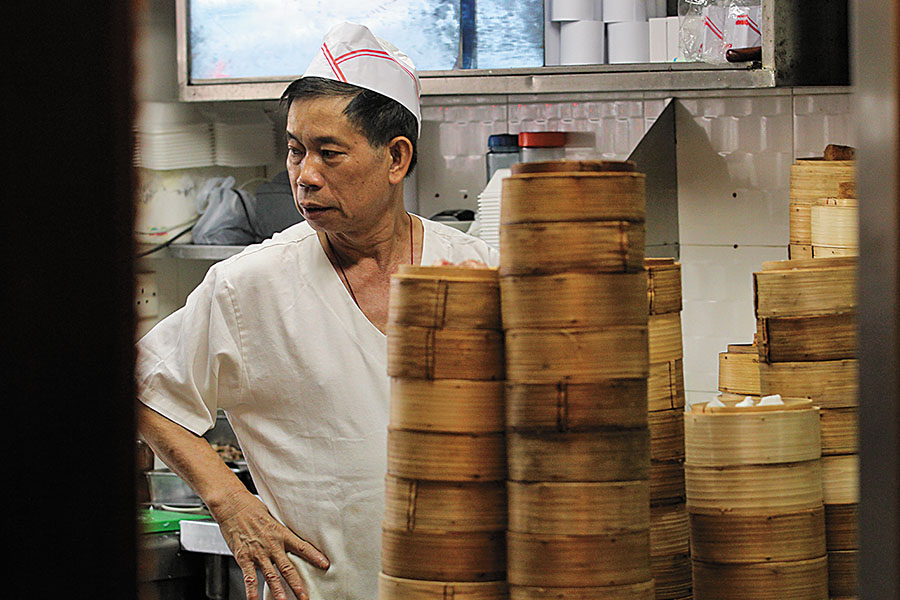 Located on the first floor of the restaurant, the kitchen is like a human assembly line in action, within compact and clean surroundings that utilise space rather efficiently. On one table, a chef swiftly flattens flour balls with a thick knife to form the outer cover of dim sums. Next to him, another chef smoothly fills in the filling with a wooden spatula and shapes the dim sums before neatly stacking them on a tray, while another tray of cut vegetables wait to be prepped further. Knives move rhythmically, while expert fingers give form and shape to Michelin-starred dishes. Fans fitted on walls all around keep the temperature down. In one corner, in two big pans sizzling with oil, a chef is frying bean curd with minced prawn, alternating between both pans.

Mak joins his chefs and, between prepping, tells us how, as a 15-year-old, he started learning how to make dim sums from his father and uncle, who were both chefs. His skill was refined during a four-year stint at the three Michelin-starred Lung King Heen restaurant, located at Hong Kong’s Four Seasons Hotel, before he and Leung started Tim Ho Wan.

His 41 years of experience is reflected in the flavours that his menu offers. Except the core menu that includes the highly sought-after dim sums, the menu is revised regularly to include seasonal dishes, and traditional fare during Chinese festivals, such as rice pudding during the Chinese New Year and moon cakes during the mid-autumn festival.

The brand is currently looking to enter markets in Europe, China and South Korea. With their consistent talent and hard work, and a large dose of good luck, they look forward to expanding their customer base, one delicious dim sum at a time.