Why Irish Whiskey is making a comeback

Once popular and dominant, distilleries are now experiencing a rise again, within and outside Irish borders 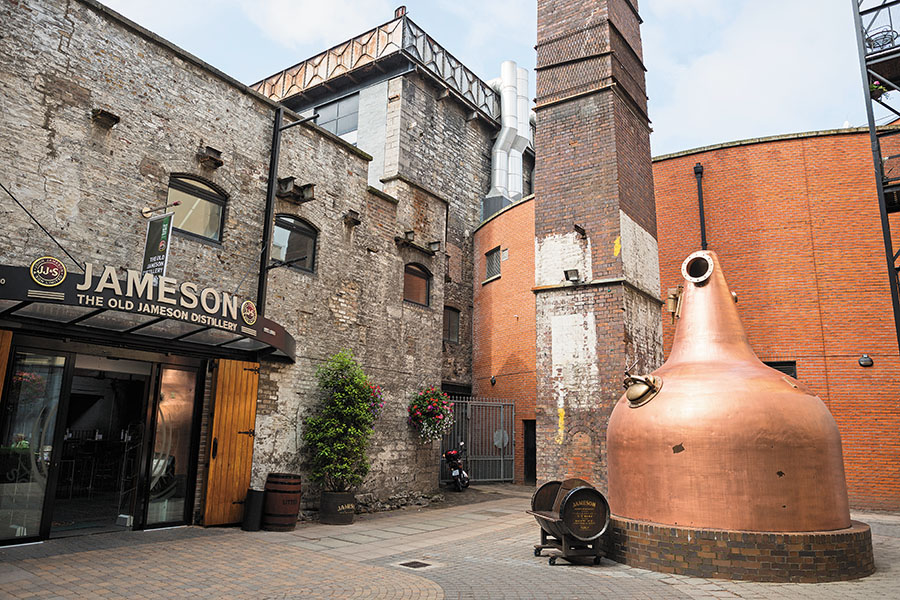 Jameson Distillery in Dublin founded by John Jameson, who popularised the concept of triple distillation for Irish Whiskies
Image: Education images/ UIG via Getty Images A flimsy wooden plank hangs low in the oaky-smelling shebeen (old Irish illegal bar). I push myself through groups of drunken revellers to spot the copper pot still. Below the dim yellow light, I see the barman carelessly pour the uisce beatha (Gaelic for ‘water of life’, as whiskey is referred to in Ireland) into glasses. “Do you like it?” a familiar voice distracts me. I open my eyes to realise I am standing in no shebeen but in the oldest licenced distillery in the world, Old Bushmills Distillery’s 1608 Bar. And Lauren, my tour guide at Old Bushmills, is expecting an answer to the beautiful Bushmills 16 Year Old Single Malt I have just tasted. “What do I say—it is like finding a time capsule steeped in Irish whiskey,” I tell her. The Old Bushmills Distillery in Northern Ireland’s County Antrim got its licence in 1608. However, it was only in 1784 that it was registered, and the pot still became its trademark. In its formative years, poitín (or potcheen, similar to the American moonshine) was homemade from potatoes or barley and sold illegally in shebeens, away from the taxman’s reach. The traditional Irish whiskey, however, was made from a mash of malted and unmalted Irish barley in single pot stills. It is common for locals to be loyal to a single pot still, when it comes to their favourite tipple. Every whiskey produced in Ireland is barrelled for a minimum of three years and one day—a day extra than its Scottish counterpart. But the most important differentiating factor between Irish and Scottish whiskeys is their distillation process: The peat-dried malted barley of Scotch is double-distilled, while the kiln-dried Irish whiskey is triple-distilled.  The process of triple distillation was introduced by John Jameson, who founded the famous Jameson Distillery Bow Street in Dublin in 1780. He believed that distilling the spirit thrice enhanced its smoothness and flavours, which became characteristic to Irish whiskey. I taste these elements in the Bushmills Distillery Reserve 12 Year Old Single Malt. Its smooth texture rolls on the palate, with hints of sweetness. Lauren tells me that the sweetness comes from the time it spends in sherry casks. “Distilling is the science of whiskey and maturation is the art,” she adds. As I travel across Northern Ireland and Dublin, I put Lauren’s words to test. The Kilbeggan Single Grain, for instance, is sweet with matured bourbon-wood flavours. This spirit comes from Kilbeggan, the world’s oldest whiskey distillery. Its neighbour, Tullamore Dew from County Offaly, is preferred among the local Irish for its Original and 12 Year Old Special Reserve. Both, known for their smoothness, are aged in sherry and bourbon barrels, though the latter is more complex due to its longer maturation period. In every county of Northern Ireland a different flavour is being infused. 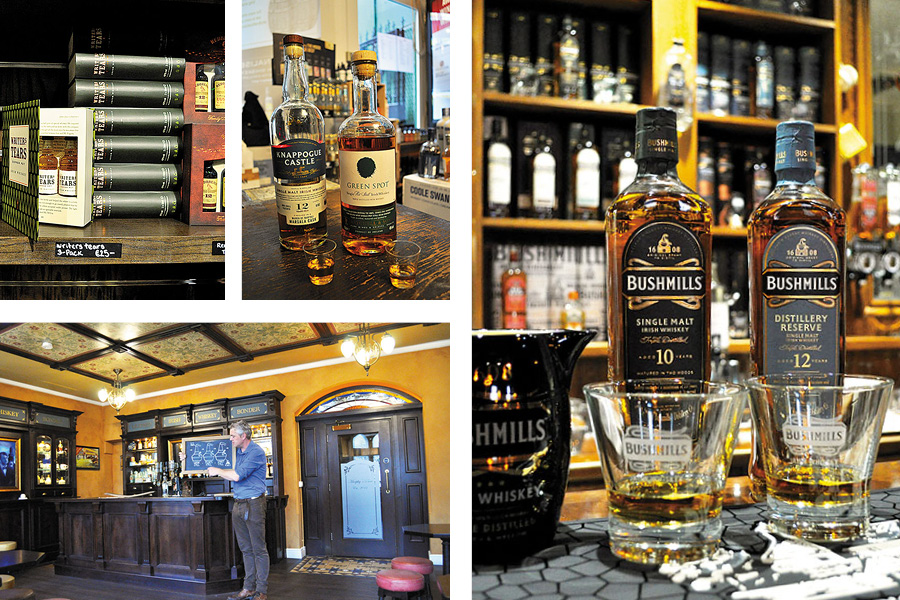 (Clockwise from top left): Local whiskies on display at a shop in Dublin; The Knappogue Castle 12 Year Old single malt; the Bushmills 16 Year Old Single Malt; a guide explains the history of Irish whiskey The rise, and fall… Perhaps Dublin is the only converging factor on Ireland’s whiskey map. By the late 19th century, the total number of licenced distilleries on the island was 88 and the four biggest—John Power & Son, John Jameson & Sons, George Roe & Co, and William Jameson & Co—operated from the Irish capital. Of these, George Roe transformed the Liberties neighbourhood of the city by becoming the largest producer of whiskey in the world. Hence, the Liberties grew as the centre of whiskey production and distribution. After the British Parliament passed the 1823 Excise Act, which sanctioned the distilling of whiskey, 70 percent of the global whiskey business was managed by Irish distilleries. The Act also encouraged smaller distilleries to mushroom across the island. “As if the Great Fire of 1875 [in Dublin] was a warning,” says John, my tour guide who is taking me around Dublin’s Irish Whiskey Museum, where I am exploring new chapters of Irish whiskey history. “There were rivers of whiskey flowing through the streets in the Liberties and people cupped their hands to collect as much as they could.” Out of the 5,000 barrels of the spirit, only 61 were rescued. The inferno, which set off the fire alarm at 8 pm on June 18, 1875, is believed to have killed 13 people, none of whom died because of the fire itself, but because of alcohol poisoning. By early 20th century, a number of factors contributed to the plunge of Ireland’s whiskey industry—the Irish Independence movement from 1919-21, prohibition in the US (its strongest market), and rising taxes imposed by the local government. By the late 20th century, in 1976, the last distillery in Dublin downed its shutters. …and rise When John Teeling set up the Cooley Distillery in County Louth, in 1989, it was the first in the century. In an attempt to revive the old Irish liquor industry, Teeling acquired historic brands like Kilbeggan. In 1988, the French drinks conglomerate Pernod Ricard heavily invested in the Irish Distillers Group—formed in 1966 by a merger of John Jameson & Son, John Powers & Son, and Cork Distilleries Company—with a production unit in Midleton in County Cork. This helped make Jameson the face of Irish whiskey worldwide, where it gradually dominated 65 percent of sales of Irish whiskeys by 2016. In 2015, Teeling’s sons Jack and Stephen further aided the industry’s resurgence by opening Teeling Distillery in the heart of Dublin, in the Liberties, making it the first distillery to open in the capital in 125 years. British multinational alcoholic beverages company Diageo, producers of the world famous Guinness, announced in 2017 that they would set up a new distillery in Dublin by 2019. Called Roe & Co, it would be a dedication to George Roe, the founder of George Roe & Co, and would be established near his old Thomas Street Distillery, which shut shop in 1926.  Blackwater Distillery in County Waterford, which opened last November, is yet another example of the revival of Irish whiskey. William Lavelle, head of Irish Whiskey Association, commented on the occasion that Blackwater was the 21st distillery in operation in Ireland. “Over the coming months, we will see at least five more distilleries come on stream.”

Tour of the local whiskey cellar Does this mean Irish whiskey is a phoenix rising from the ashes? “Apart from new distilleries opening up, whiskey tourism is also on the rise,” asserts John Callely Jr, who takes me on an abridged version of his Dublin Whiskey Story tour. Callely has been working in the tourism sector since 1999, where he and his father, John Callely Sr, conduct numerous multi-day tours across Ireland. “Since Irish whiskey matures in casks for at least three years, many distilleries produce gin to keep the production and establishment costs going,” he adds. I know what Callely means when I see bottles outnumbering shelves at the Celtic Whiskey Shop on Dawson Street in Dublin, the largest whiskey shop in Ireland. Not only do they stock Irish whiskeys and gins, but a host of Scottish, Japanese, Russian, Indian, and Swedish whiskies, along with vodka and cognac. “We offer our clientele international names like Jameson, local favourites like Powers, single casks and a lot of independent bottlers,” says John O’Donovan, the store manager of  Celtic Whiskey Shop. “There are new whiskeys coming up every week, with about 10 new whiskeys in the two weeks before Christmas. So we’re trying to build more shelves.” John offers me a tasting of the special Knappogue Castle 12 Year Old Single Malt. It comes from an independent bottler and has been aged for 12 years in a bourbon cask, and finished in a marsala (sweet Italian wine) cask. “There are only 690 bottles of it,” he adds. “My current favourite.” Throughout my trip, I see Lauren’s words being reinforced: “Everyone’s palate is different. If our palates weren’t different, we wouldn’t like different whiskeys.” In Portrush, Northern Ireland, my tour guide, Dee Morgan says, “I quite like the Bushmills Black Bush. It has a more chocolatey taste to it.” In Dublin, O’Donovan prefers the Knappogue Castle 12 Year Old Single Malt. Callely Junior picks the Powers Gold Label as his favourite. And John from the museum agrees. “But how do the Irish drink their whiskey? With ice? With water?” I ask John. “I am no one to tell you how to drink your whiskey,” he says promptly. Yet another notion reinforced by all the Irish I have met.

Tweets by @forbesindia
A portrait of the White House and its culture of chaos
There are probably cameras on your flight, but relax, they're not on (yet)