In a country that suffered the worst wildfires in its recorded history just a year ago, the deluge has become another record-breaker, and is only likely to worsen in the coming days 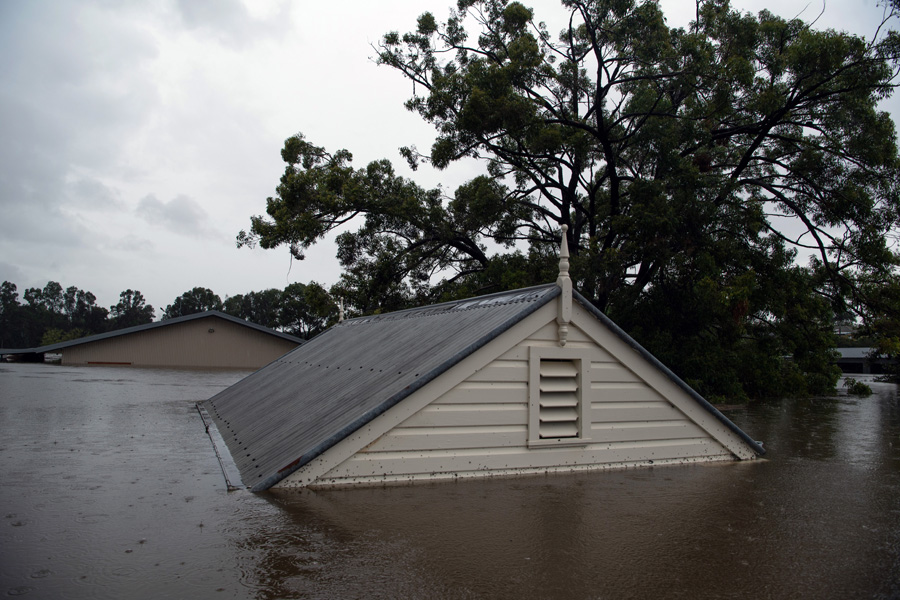 Flooding in Windsor, Australia, on Monday, March 22, 2021. Nearly 20,000 Australians have been forced to evacuate because of flooding, and more than 150 schools have been closed. (Matthew Abbott/The New York Times)

WINDSOR, Australia — Kelly Miller stood in her doorway Monday, watching the water rise to within a few inches of the century-old home where she runs an alternative medicine business. The bridge nearby had already gone under in some of Australia’s worst flooding in decades, along with an abandoned car in the parking lot.

Two massive storms have converged over eastern Australia, dumping more than 3 feet of rain in just five days. In a country that suffered the worst wildfires in its recorded history just a year ago, the deluge has become another record-breaker — a once-in-50-years event, or possibly 100, depending on the rain that is expected to continue through Tuesday night.

Nearly 20,000 Australians have been forced to evacuate, and more than 150 schools have been closed. The storms have swept away the home of a couple on their wedding day, prompted at least 500 rescues and drowned roads from Sydney up into the state of Queensland 500 miles north.

Shane Fitzsimmons, the resilience commissioner for New South Wales — a new state position formed after last year’s fires — described the event as another compounding disaster. Last year, huge fires combined into history-making infernos that scorched an area larger than many European countries. This year, thunderstorms have fused and hovered, delivering enough water to push rivers like the Hawkesbury to their highest levels since the 1960s.

Scientists note that both forms of catastrophe represent Australia’s new normal. The country is one of many seeing a pattern of intensification — more extreme hot days and heat waves, as well as more extreme rainfalls over short periods.

It is all tied to a warming earth, caused by greenhouse gases. Because global temperatures have risen 1.1 degrees Celsius, or about 2 degrees Fahrenheit, over preindustrial levels, landscapes dry out more quickly, producing severe droughts, even as more water vapor rises into the atmosphere, increasing the likelihood of extreme downpours.

“There is a very strong link between global warming and that intensification in rainfall,” said Andy Pitman, director of the ARC Center of Excellence for Climate Extremes at the University of New South Wales. “There’s good scientific evidence to say extreme rain is becoming more extreme due to global warming.”

Australia’s conservative government — heavily resistant to aggressive action on climate change that might threaten the country’s fossil fuel industry — has yet to make that link.

Prime Minister Scott Morrison has offered funds for those forced to flee and several dozen areas have already been declared disaster zones.

“It’s another testing time for our country,” he told a Sydney radio station, 2GB, on Monday.

Windsor may become one of the places hardest hit. Over the weekend, the Hawkesbury rose rapidly by more than 30 feet, and it is expected to peak in the next day or so at 42 feet.

With rain continuing to fall, emergency workers wearing bright orange went door to door on side streets with waist-deep puddles where the road dipped.

In and around the historic downtown, many of the businesses close to the river stayed shut Monday, with a few putting sandbags by their doors. The central meeting place seemed to be at the foot of the Windsor Bridge, where television crews and crowds in rubber boots marveled at the view.

The new Windsor Bridge, which opened just a few months ago as a “flood-proof” replacement for an older bridge, was completely underwater.

It was built 10 feet higher than the bridge it replaced, but the river flowed over it as if it did not exist. A red flashing light on the top of a buried yellow excavator offered the only hint of the old bridge, or what had once been solid ground.

Cameron Gooch, 46, a diesel mechanic from a town nearby, said he saw huge trees speeding downriver toward the coast a day earlier. The water seemed to have slowed down, he said, becoming a giant bathtub with water held in place and rising slowly from tributaries.

“That’s the problem,” he said. “It’s just going to keep building up.”

Tweets by @forbesindia
Cryptos as an asset class could be India's middle path: Nandan Nilekani
FILA 2021 GenNext Entrepreneur Sharvil Patel of Cadila Healthcare on exploring the power of science and drug discovery