The International Olympic Committee may be forced to cancel the Olympics for the first time since World War II. 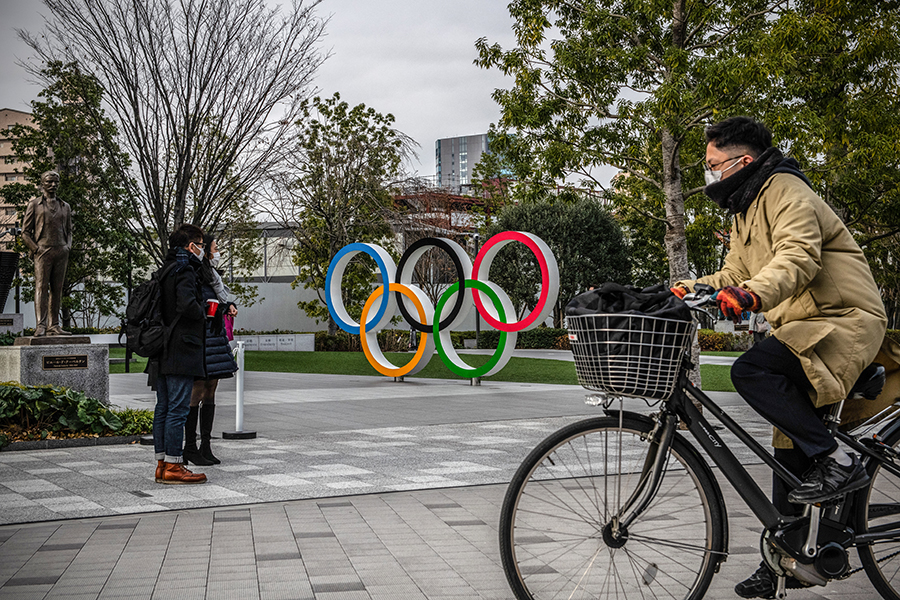 A man wearing a face mask cycles past the Olympic Rings on January 12, 2021 in Tokyo, Japan. Recent surveys by Kyodo News and Tokyo Broadcasting System found that over 80 percent of people in Japan who were questioned believe the Tokyo Olympics should be cancelled or postponed or that the Olympics will not take place. Tokyo remains in a second state of emergency amid a third wave of Covid-19 coronavirus that has seen infection rates climb to unprecedented levels.
Image: Carl Court/ Getty Images

Plans for the postponed Tokyo Olympic Games are growing more uncertain by the day. As coronavirus cases rise throughout Japan and in several large countries in Europe and the Americas, officials both in Tokyo and with the International Olympic Committee have begun to acknowledge that holding a safe games might not be possible, endangering dreams that the Olympics could serve as a global celebration of the end of the pandemic. Instead, the IOC may be forced to cancel the Olympics for the first time since World War II. That would be a huge financial blow to both the Olympic organization and Japan, which has spent more than $12 billion building stadiums and improving its infrastructure to prepare for the games, and billions more to delay the event by a year. For weeks, Japanese and Olympic officials have insisted that the games will go forward and that a further delay is not possible. Organizers have been trying to come up with plans to hold the games in a manner acceptable to the Japanese public, announcing an array of safety measures. But polls show an increasing wariness. In a survey this month, the Japanese broadcaster NHK found that nearly 80% of respondents believed the games should be postponed or canceled. In October, less than half of respondents said that. The figure rose to 71% in December. On Friday, Taro Kono, a member of Japan’s Cabinet, broke with his government’s official line, saying the games “could go either way,” according to a report by Reuters. His remarks followed similar comments this week by the Canadian Dick Pound, the longest-serving IOC member, who told the BBC that there was “no guarantee” that the games would take place. Organizers in Tokyo and at the IOC agreed in March to postpone the games for one year. The sports festival, the world’s largest, was supposed to take place last July and August. The opening ceremony for the Summer Games is now scheduled for July 23. Thomas Bach, the president of the IOC, has said that postponing the games again is not an option and that if the event cannot take place this summer, it will not happen at all. Toshiro Muto, chief executive of the Tokyo Organizing Committee for the Olympic Games, reaffirmed that position this week. The IOC has already awarded the 2024 Summer Games to Paris and the 2028 Summer Games to Los Angeles. Hopes for the games had risen as several major sporting events were held around the world without major problems, albeit on a much smaller scale and with few or no fans in attendance. For now, Japan is vowing to press ahead with preparations. Yoshiro Mori, president of the Tokyo organizing committee, tried to reassure staff members in a speech Tuesday. “Spring will definitely come,” he said. “After a long night, there will definitely be a morning. Believing so, I would like to work hard to the end so that we can give joy and hope to many people.” That echoed the vision Bach described in a New Year’s address, when he said he viewed the Tokyo Games as the “light at the end of the tunnel” of the pandemic. He hailed the quick development of vaccines for providing hope that the games could be safe. “They will be a celebration of solidarity, of unity of humankind in all our diversity, and of resilience,” Bach said. The rollout of the vaccines has been slower than expected, however, and much of humanity will remain unvaccinated by this summer. Japan does not plan to begin vaccinating its citizens until late February, a process that will take months. According to people who have been briefed on the strategy, the IOC and Tokyo organizers are not factoring the vaccines into their plans for the games, instead assuming that many of the roughly 10,000 athletes — and tens of thousands of coaches and officials traveling to the games — will not have received vaccination. Officials say requiring athletes to be vaccinated is not realistic. It is not yet clear whether organizers would allow spectators to attend the games, or travel from outside Japan for the Olympics. Japan has instituted a travel ban for all international visitors that is scheduled to end Feb. 7, but it could be extended. Elite athletes are no longer exempt from it. Holding the games has been a priority for Prime Minister Yoshihide Suga of Japan, who in September replaced Shinzo Abe, the main force behind the effort to bring the Olympics back to Tokyo for the first time since 1964. As concern about hosting the games grows, officials have begun to form plans to address the danger of bringing so many visitors to a country that is experiencing its most rapid spread of the virus since the beginning of the pandemic. While Japan, a country of more than 125 million people, has recorded just over 300,000 cases and 4,200 deaths — far fewer than many Western countries — it has had record caseloads and death tolls in recent days. It reported more than 6,000 new cases Thursday. Seiko Hashimoto, the Olympics minister for Japan, told reporters Tuesday that organizers were examining “comprehensive anti-infection measures, including necessary checkups and tracking management so that we can hold safe and secure games without vaccination as precondition.” Officials have proposed screening and testing visitors upon arrival. Athletes may be subject to multiple tests, and their movements may be limited. They may have to leave the Olympic Village as soon as they are finished competing and may be restricted in whom they can associate with in Tokyo. During a recent conference call with officials from national Olympic committees, Lucia Montanarella, head of Olympic Games media operations for the IOC, said press access to athletes could be severely curtailed. Journalists may be subject to location tracing and be prohibited from traveling anywhere in Tokyo other than to and from their hotels, Olympic venues and the main media centers.

Tweets by @forbes_india
And what you expect will happen
Digital will be primary driver of growth in 2021: Manish Malhotra