Hospitals discover a surprise in their vaccine deliveries: Extra doses 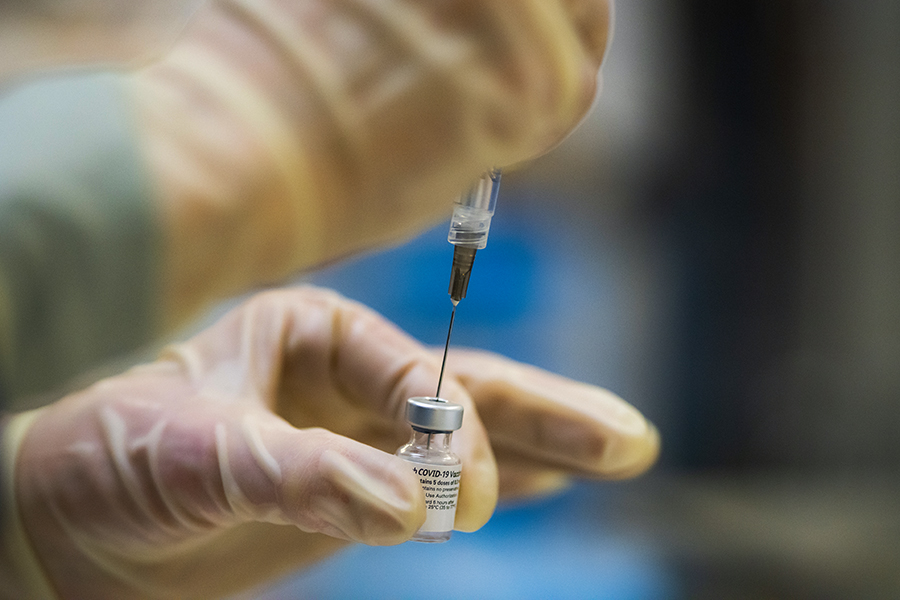 As boxes of Pfizer vaccines began arriving around the country this week, hospital pharmacists made a surprising discovery: Some of the glass vials that are supposed to hold five doses contained enough for a sixth — or even a seventh — person. The news prompted a flurry of excited exchanges on Twitter and pharmacy message boards this week as hospital workers considered the tantalizing possibility that the limited supply of desperately needed vaccine might be stretched to reach more people. But it also set off a wave of confusion and debate over whether to use the extra doses, or to throw them out. At Northwell Health in New York, for example, an executive estimated that the hospital network might have thrown out enough extra vaccine to account for 15 to 20 doses while it waited for guidance from the state Health Department. On Wednesday, the pharmacists got an answer. In a statement, the Food and Drug Administration said that, “given the public health emergency,” it was acceptable to use every full dose left over in each vial. The agency said it was consulting with Pfizer to determine “the best path forward” and advised health officials not to pool doses from multiple vials. “We never want to waste — waste medication, waste vaccine,” said Anna Legreid Dopp, senior director of clinical guidelines and quality improvement at the American Society of Health-System Pharmacists. “So that would be exciting if that is an opportunity.” The vaccine, which was developed by Pfizer and the German company BioNTech, is in extremely short supply. Pfizer has said it has manufactured enough vaccine to supply at least 25 million doses — enough for 12.5 million people since it requires two shots — to the United States before the end of the year, but federal officials have allocated it carefully, doling out only 2.9 million doses beginning this week after the FDA authorized its emergency use last Friday. Because the vaccine is so scarce, it is being given first to front line health care workers and residents and staff in nursing homes, and experts have said a vaccine won’t be available for every American who wants one until well into next year. In a statement, Pfizer said the company was consulting with the FDA about the extra vaccine in some vials and could not “provide a recommendation on the use of the remaining amount of vaccine from each vial.” It advised staff members doing the vaccinations to consult with local institutions. Erin Fox, the senior pharmacy director of drug information and support services at the University of Utah, said she got a call from pharmacists on her staff Tuesday, shortly after they began diluting the vaccine with saline and drawing it into syringes. A little bit of “over fill” in vials that contain multiple doses is normal, she said, but this was different. “They initially thought that they had incorrectly done it because there was so much left in the vial after they pulled up the five doses,” Fox said. “They sent us a picture and were like, can we use the extra?” Fox said her staff reached out to Pfizer as well as Utah’s Health Department, which she said told them not use the extra doses because it was not in keeping with the company’s instructions. She said the doses were discarded, but that the staff would now begin drawing up extra doses. Dr. Mark Jarrett, chief quality officer for Northwell Health, said Wednesday that clinicians administering the Pfizer vaccine to health care workers this week noticed that some vials contained enough for a sixth dose. The health system has asked the New York State Department of Health for guidance on whether it could be used. Jarrett said that “some people used the sixth dose, because they didn’t recognize the question about it.” But Northwell is only dispensing five doses from each vial, and is discarding the extra medication — amounting to about 15 to 20 doses on Tuesday. He said he had not yet seen the guidance from the FDA. “We need to see it documented somewhere, it would make us feel better,” he said. New York state health officials contacted the FDA for guidance Wednesday morning after learning of the issue that morning, according to a Health Department spokesman. On a call Wednesday with nearly 200 health care providers, the state health commissioner, Dr. Howard A. Zucker, discussed the issue and said extra doses could be used. Dr. Michael J. Consuelos, a health care consultant, said that during the H1N1 influenza pandemic in 2009, hospital pharmacists made a similar discovery at the Lehigh Valley Health Network in Pennsylvania, where he then worked overseeing the response to the pandemic. That vaccine was also scarce, and officials decided to use the extra doses. “What we want to do is provide as many doses to people as safely and as efficiently as possible,” said Consuelos, who said he participated as a volunteer in the Pfizer vaccine trial. If hospital professionals can do it safely, “then we should take those opportunities.” The news that hospitals may be able to vaccinate more people than expected also creates new complications. Federal officials have carefully managed the supply of vaccine, holding in reserve enough doses for each person who got the first dose to receive a booster shot three weeks later. Dopp said hospitals that squeeze extra doses will have to make sure that the person will have the second shot waiting for them. “This is where we really need nimble tracking systems and real-time information systems so that we can make these decisions in quick order,” she said. But Dopp acknowledged that it’s also a good problem to have. “These are some of the lessons that we can’t learn until vaccine is in hand,” she said.