Toyota currently does not sell any electric vehicles in major markets outside China, but it said in April that it plans to sell 15 battery-electric models globally by 2025, part of a wider lineup of 70 battery-electric, hybrid and hydrogen fuel cell vehicles to offer "diverse choices" to buyers 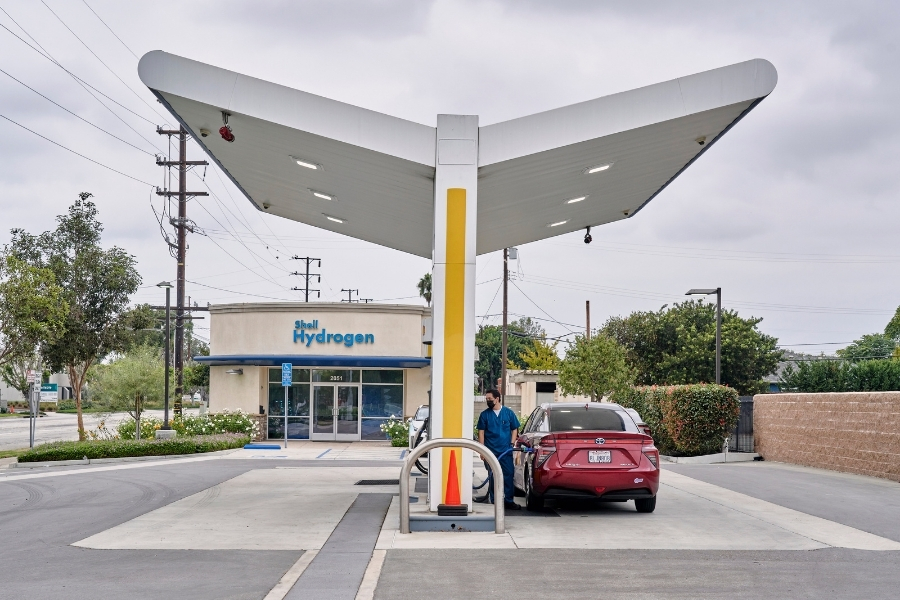 A person fuels their Toyota Mirai at a hydrogen fuel pump in Torrance, Calif., Oct. 22, 2020. The lack of refueling infrastructure for hydrogen vehicles, along with the cars’ high prices, has held them back. (Philip Cheung/The New York Times)


The Toyota Prius hybrid was a milestone in the history of clean cars, attracting millions of buyers worldwide who could do their part for the environment while saving money on gasoline.

But in recent months, Toyota, one of the world’s largest automakers, has quietly become the industry’s strongest voice opposing an all-out transition to electric vehicles — which proponents say is critical to fighting climate change.

Last month, Chris Reynolds, a senior executive who oversees government affairs for the company, traveled to Washington for closed-door meetings with congressional staff members and outlined Toyota’s opposition to an aggressive transition to all-electric cars. He argued that gas-electric hybrids such as the Prius and hydrogen-powered cars should play a bigger role, according to four people familiar with the talks.

Behind that position is a business quandary: Even as other automakers have embraced electric cars, Toyota bet its future on the development of hydrogen fuel cells — a costlier technology that has fallen far behind electric batteries — with greater use of hybrids in the near term. That means a rapid shift from gasoline to electric on the roads could be devastating for the company’s market share and bottom line.

The recent push in Washington follows Toyota’s worldwide efforts — in markets including the United States, the United Kingdom, the European Union and Australia — to oppose stricter car-emissions standards or fight electric vehicle mandates. For example, executives at Toyota’s Indian subsidiary publicly criticized India’s target for 100% electric vehicle sales by 2030, saying it was not practical.

Together with other automakers, Toyota also sided with the Trump administration in a battle with California over the Clean Air Act and sued Mexico over fuel-efficiency rules. In Japan, Toyota officials argued against carbon taxes.

“Toyota has gone from a leading position to an industry laggard” in clean-car policy even as other automakers push ahead with ambitious electric vehicle plans, said Danny Magill, an analyst at InfluenceMap, a London-based think tank that tracks corporate climate lobbying. InfluenceMap gives Toyota a “D-” grade, the worst among automakers, saying it exerts policy influence to undermine public climate goals.

In statements, Toyota said it was in no way opposed to electric vehicles. “We agree and embrace the fact that all-electric vehicles are the future,” said Eric Booth, a Toyota spokesperson. But Toyota thinks that “too little attention is being paid to what happens between today, when 98% of the cars and trucks sold are powered at least in part by gasoline, and that fully electrified future,” he said.

Until then, Booth said, it makes sense for Toyota to lean on its existing hybrid and plug-in hybrid vehicles to reduce emissions. Hydrogen fuel cell technology should also play a role. And any efficiency standards should “be informed by what technology can realistically deliver and help keep vehicles affordable,” the company said in a statement.

More recently, the Alliance for Automotive Innovation, an industry lobby group, argued in closed-door meetings in Washington that the California compromise, which is expected to be a model for new standards from the Biden administration, is in fact not feasible for all of its members, according to two of the people with direct knowledge of the discussions. The chairman of the alliance is Reynolds, the Toyota executive.

The Biden administration wants to use tougher emissions rules to rapidly increase sales of electric vehicles. Congress could also approve billions of dollars for construction of charging stations as well as tax incentives for electric cars and trucks.

Don Stewart, a spokesman for the alliance, said he was unaware that any of the group’s representatives had said the California compromise was not feasible. The alliance supports standards roughly midway between what the Trump and Obama administrations had adopted, he said.

Toyota’s strategy is that, in the longer term, hydrogen fuel cell cars can still be a major technology for passenger cars, with gas-electric hybrids helping reduce emissions in the short term. However, hydrogen cars remain costlier, and hydrogen as a fuel for passenger cars isn’t widely available. Various studies have shown, meanwhile, that hybrids achieve more modest near-term emissions reductions.

Toyota, a major sponsor of the Tokyo Olympics, has used that platform to promote its message of sustainability. Hydrogen fueled the Olympic torch for part of its journey, and Toyota’s fleet of sleek Mirai hydrogen fuel cell cars have been whisking Olympic dignitaries around Tokyo.

Toyota’s lobbying also comes as the Japanese automaker’s political donations have come under scrutiny. Last month, the nonprofit watchdog Citizens for Responsibility and Ethics tallied campaign contributions and found that Toyota was the largest corporate donor by far this year to Republicans in Congress who disputed the result of the 2020 presidential election.

According to a New York Times analysis, at least 22 of those lawmakers have also denied the scientific consensus on human-caused climate change.

Toyota initially defended its contributions, then changed course, saying it would halt its donations.

Booth, the Toyota spokesperson, said Toyota believes climate change is real. “The opinions expressed by members of Congress are just that — their opinions and theirs to be accountable for,” he said. He also noted that politicians who hold such beliefs have received contributions from other automakers as well.

The findings surprised some longtime auto industry experts. Toyota has generally kept a low political profile but has recently become a major donor and lobbying force in Washington.

“They really were on the right path, especially with the introduction of the Prius, and they still talk about climate change,” said Margo Oge, former director of the Office of Transportation Air Quality at the Environmental Protection Agency. “But they’re fighting policies for electric vehicles across the globe, and that’s hurting the effort of policymakers in setting any ambitious measures.”

On paper, Toyota’s approach to zero-emissions vehicles, the hydrogen fuel cell, is a dream: Unlike battery-powered electric vehicles, these cars carry hydrogen tanks and fuel cells that turn the hydrogen into electricity. They refuel and accelerate quickly, and can travel for several hundred miles on a tank, emitting only water vapor. And hydrogen, theoretically, is abundant.

But a high sticker price, as well as lack of refueling infrastructure, has hampered the growth of a hydrogen economy, at least for passenger cars.

Toyota has sold only about 11,000 of its Mirai fuel-cell cars since introducing the vehicle in 2014. Honda, another hydrogen pioneer, said recently it was killing its hydrogen model. Many analysts say that hydrogen technology is more suited for long-haul trucks or for use in energy-intensive industries such as steel manufacturing.

“I think hydrogen holds promise, but it’s at least a decade behind batteries right now,” said David Friedman, vice president of advocacy at Consumer Reports and former acting administrator of the National Highway Traffic Safety Administration. “And Toyota is saying, ‘No, we’ve got to hold off, we’ve got to wait till they’re ready with hydrogen.’ But the climate can’t wait.”

Toyota also argues that hybrid technology — that is, vehicles powered by an internal combustion engine and an electric motor — is an easier first step toward fully electric cars and could help get more people into cleaner cars more quickly until hydrogen becomes widespread. Toyota has made major investments in hybrid technology as well. The company has outlined a vision for a product lineup dominated by hybrids through 2050 — far later than when many analysts say new cars must be zero-emission.

Toyota currently does not sell any electric vehicles in major markets outside China, but it said in April that it plans to sell 15 battery-electric models globally by 2025, part of a wider lineup of 70 battery-electric, hybrid and hydrogen fuel cell vehicles to offer “diverse choices” to buyers.

The automaker, based in Toyota City, Japan, has begun lagging behind in fuel efficiency across its entire fleet, as it has pushed sales of larger trucks and sports-utility vehicles, which bring bigger profit margins. EPA figures show that Toyota has made relatively little progress on fuel economy over the past five years, going from an industry leader to part of the bottom tier, along with General Motors and Ford.

“Toyota followed GM and other American automakers to produce gas-guzzling pickups and SUVs in large numbers,” said Dan Becker, director of the Safe Climate Transport Campaign at the Center for Biological Diversity.

Jeffrey Liker, professor emeritus of industrial and operations engineering at the University of Michigan and author of “The Toyota Way,” said there were other factors slowing Toyota’s push. A famously cautious company, Toyota has researched solid-state batteries, which are safer than the widely used lithium-ion technology, but readying that technology has taken longer than they expected, he said. Toyota has also spoken about not wanting to lay off employees or bankrupt suppliers in a rapid transition to electrics.

“Toyota’s view is also that countries are jumping in with the idea of the electric vehicle endgame without a real plan, and it’s more political showmanship than sound planning,” Liker said.

There are several factors that could ultimately force Toyota’s hand. For one, China, an important market for Toyota, has moved aggressively to require automakers there to make electric vehicles. That has spurred Toyota to start producing electric cars under a joint venture.

Mary Nichols, who negotiated with Toyota as the former chairwoman of the California Air Resources Board, the state’s clean-air regulator, said she had been surprised by Toyota over the past few years. “I think they, over the years, have produced really good technology, and that they’ve been pioneers,” she said. “But at this moment, they’ve definitely been caught flat-footed.”