The Trump administration had proposed a major weakening of federal auto emissions standards set during the Obama administration. The decision of these automakers pits them against leading competitors, including Honda and Ford, which this year reached a deal to follow California's stricter rules. 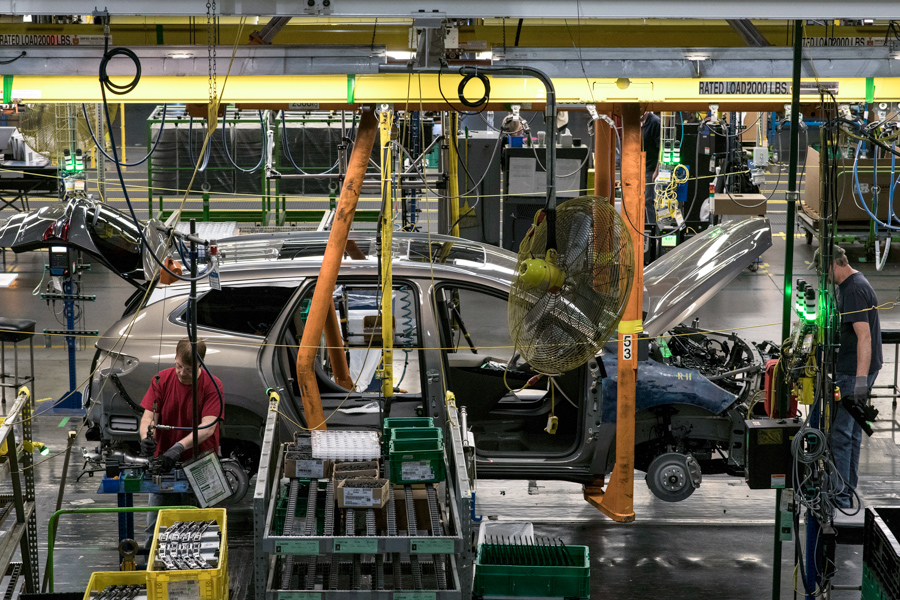 A Buick makes its way down the assembly line at the General Motors assembly line in Lansing, Mich., on March 5, 2017. Breaking with some of their biggest rivals, General Motors, Fiat Chrysler and Toyota said Oct. 28, 2019, they were intervening on the side of the Trump administration in an escalating battle with California over fuel economy standards for automobiles. (Brittany Greeson/The New York Times)

Breaking with some of their biggest rivals, General Motors, Fiat Chrysler and Toyota said Monday that they were intervening on the side of the Trump administration in an escalating battle with California over fuel economy standards for automobiles.

Their decision pits them against leading competitors, including Honda and Ford, which this year reached a deal to follow California’s stricter rules. It represents the latest twist in one of the Trump administration’s most consequential rollbacks of regulations designed to fight climate change. It has also opened a rift among the world’s biggest automakers — the very industrial giants that the Trump administration maintains it was trying to help with regulatory relief.

The Trump administration has proposed a major weakening of federal auto emissions standards set during the Obama administration, prompting California to declare that it will go its own course and keep enforcing the earlier, stricter standards.

The automakers siding with the administration, led by the industry group the Association of Global Automakers, say that the federal government, not California, has the ultimate authority to set fuel economy standards for passenger cars and trucks.

John Bozzella, chief executive of the automakers association, said the group still hoped for a middle ground. “We can still reach an agreement that is supported by all the parties,” Bozzella said.

Still, the auto industry has “historically taken the position that fuel economy is the sole purview of the federal government,” he said, “though it doesn’t have to come to that.”

The legal fight between the Trump administration and California over auto pollution rules has swelled into a battle over states’ rights and climate change that is likely to only be resolved once it reaches the Supreme Court. Its resolution could have repercussions affecting pollution regulations across the United States, as well as states’ rights to set their own environmental laws and the future contours of the auto industry.

After Donald Trump won the presidency, automakers initially sought rollbacks in the Obama-era rules. However, the administration went further than expected in weakening the emissions rules, creating the predicament for automakers that is now dividing the industry.

Under the decades-old Clean Air Act, California has the power to write its own clean-air rules, and the state has taken the Trump administration to court to defend its authority.

Several other states have pledged to follow California’s lead in enforcing stricter standards for auto emissions, meaning that their actions have the potential to split the U.S. auto market, with each side selling vehicles with different sets of pollution standards.

In July, Honda, Ford, Volkswagen and BMW sided with California in the battle, striking a deal with the state to follow more stringent standards close to the original Obama-era rules. That surprise agreement would allow those automakers to meet both federal and state requirements with a single national fleet, avoiding a patchwork of regulations.

The pact came as an embarrassment for the Trump administration, which assailed the move as a “PR stunt.” In what was widely seen as a retaliatory move, the Justice Department subsequently opened an antitrust inquiry into the four automakers on the grounds that their agreement with California could potentially limit consumer choice, according to people familiar with the matter at the time the inquiry was opened.

In a statement, Honda distanced itself from Global Automakers’ intervention.

“Honda is not a participant in this litigation,” said Marcos Frommer, a Honda spokesman, “and is not contributing any funds supporting our trade association’s activity in this area.” Honda has already locked in vehicle greenhouse gas standards through model year 2026 based on the stricter standards agreed on with California, Frommer said.

General Motors and Fiat Chrysler referred queries to Global Automakers. Toyota did not immediately respond to a request for comment.

The Obama-era national fuel economy standard requires automakers to build vehicles that achieve an average fuel economy of 54.5 mpg by 2025, which would eliminate about 6 billions tons of carbon dioxide pollution over the lifetime of those vehicles.

Carbon dioxide is one of the most important greenhouse gases that contribute to the warming of the planet. The Trump administration is planning to roll back the fuel-economy standard to about 37 mpg.

Mary D. Nichols, chairwoman of the California Air Resources Board, which sets the state’s clean air standards, criticized the move.

“We are disappointed in the Association of Global Automakers for hiding behind the Trump administration’s skirts and its assault on public health,” she said. California, she said, would “keep working with those automakers committed to a framework that delivers cleaner vehicles that benefit consumers and the environment.”

Ann Carlson, co-director of the Emmett Institute on Climate Change and the Environment at the University of California Los Angeles, said the Trump administration had been clear from the outset that it was not interested in tightening the standards. “If you’re intervening on the side of the Trump administration to limit California’s authority, you’re siding with much less stringent standards,” she said. “I don’t think you can have it both ways.”

The move “emboldens an administration that has already rejected any sort of settlement with California,” she added.

Sen. Tom Carper of Delaware, the top Democrat on the Senate Environment and Public Works Committee, said the move Monday by General Motors, Toyota and the other automakers was “not in the long-term best interest of these companies — really, it’s just the opposite.”

“To say I’m disappointed is an understatement,” he said, “especially given the number of times these companies have told me personally that they wish to avoid costly litigation and regulatory uncertainty.”

Nearly two dozen other states have filed suit against the Trump administration, alongside California, over the emissions rules. California and the other states maintain that its authority to set standards on tailpipe pollution was granted lawfully by Congress as part of the Clean Air Act, one of the country’s foundational environmental laws, and that its revocation would be unlawful.