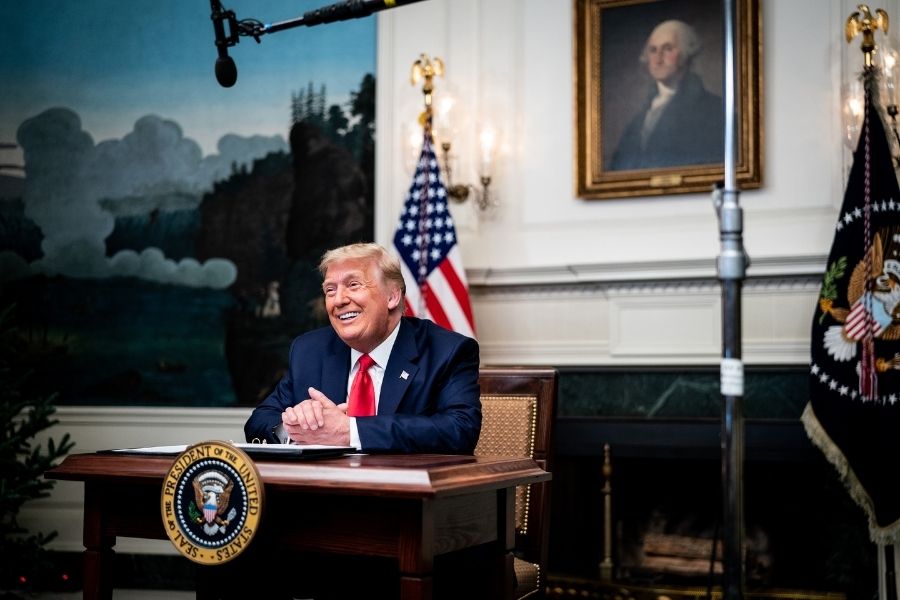 President Donald Trump speaks to members of the military over videoconference from the Diplomatic Reception Room of the White House in Washington, on Thanksgiving, Nov. 26, 2020. Even in defeat, Trump continued to raise money at some of the fastest rates of the year, pulling in $207.5 million in the month since Election Day along with the Republican Party as he made baseless claims of voter fraud to undermine the legitimacy of the election
Image: Erin Schaff/The New York Times

Even in defeat, President Donald Trump continued to raise money at some of the fastest rates of the year, pulling in $207.5 million in the month since Election Day along with the Republican Party as he made baseless claims of voter fraud to undermine the legitimacy of the election. Trump’s campaign apparatus has continued to aggressively solicit donations under the guise of supporting his various legal challenges to the election of Joe Biden, but as of now 75% of donations goes to a new political action committee that Trump formed in mid-November, up to the PAC’s legal limit of $5,000. The other 25% goes to the Republican National Committee. Only if a donor gives more than $6,000 do any funds go to Trump’s formal “recount” account. His campaign did not release a breakdown of how the $207.5 million was divided. The funds are split among the new PAC, called Save America, the RNC and two committees operated jointly by the party and the campaign, with some money also going toward paying off Trump’s campaign debts. “These tremendous fundraising numbers show President Trump remains the leader and source of energy for the Republican Party,” Bill Stepien, Trump’s campaign manager, said in a statement. Trump, who has not formally conceded the 2020 race but has begun talking about running again in 2024, has repeatedly challenged the presidential results in court with virtually no success. In his statement, Stepien added that the money “also positions President Trump to continue leading the fight to clean up our corrupt elections process in so many areas around the country, and to build on gains from the 2020 elections so we can take back the House and build on our Senate majority in 2022.” Trump’s next political steps are much discussed in both parties, and his nonstop fundraising in the month after his loss at the polls ensures his new political operation — whatever shape it takes — will continue to be well-financed. He can use the new PAC to hire staff members and pay for political travel, like his rally Saturday in Georgia, where two runoff elections on Jan. 5 will determine control of the U.S. Senate. Some of Trump’s fundraising solicitations have veered from simply disputing the results of November’s election. His campaign, for instance, offered donors who gave $45 on Thursday an “iconic” Christmas ornament (it features a photo of Trump, in a red hat, and the words “We’re saying Merry Christmas again!”). The announcement that he had raised $207.5 million in one month came on a final filing deadline of the 2020 race with the Federal Election Commission, which covers the period from Oct. 15 to Nov. 23. During that period, the RNC, Trump’s campaign and their shared committees raised a combined $495 million, campaign officials announced. The filings also showed that Biden’s campaign committee, despite contribution limits, had raised more than $1 billion since he began his campaign, though he spent almost all of it, ending with $1.5 million in the bank. The Democratic National Committee had $23.9 million in the bank as of Nov. 23, and Biden’s shared committees with the party had another $66.5 million. Some big donors contributed to Trump after Election Day, with roughly $5 million coming into a joint account with the party for large contributors after Nov. 3, including $150,000 from Kelcy Warren, the energy executive, and $260,000 from his wife, Amy, on Nov. 5, as well as $250,000 from Kenny and Lisa Troutt of Texas on Nov. 9. The RNC report showed it ended the period with $58.8 million cash on hand — a large sum for a party at the end of a campaign. As Trump has contested the results in multiple locations, the party had spent more than $6 million on legal bills, with $1.4 million going to the Jones Day law firm, $1.3 million to King & Spalding and more than $920,000 to Consovoy McCarthy. The party’s biggest expense was $42.4 million to a limited liability company, Digital Consulting Group, with a limited public footprint. The party has made its third payment of $666,666 to Reuters News & Media Inc. for “legal proceedings” related to intellectual property, for a total of $2 million that the party and company have previously declined to discuss. The filings also showed that casino magnate Sheldon Adelson and his wife, Miriam Adelson, spent nearly $210 million on the 2020 election, with $90 million going to a pro-Trump super PAC, $70 million to a Senate GOP super PAC and $40 million to a House Republican super PAC, plus millions more to various committees.

Tweets by @forbes_india
UK and US Officials Spar Over 'Vaccine Nationalism'
Exclusive: Tatas to buy 51% stake in BigBasket, Alibaba to exit