Did You Say Green Shoots?

Has the world economy begun its recovery? This is the question occupying the minds of economists and overenthusiastic journalists. Let us join the debate and read the signals that have come so far

Buzzword Bernanke
Federal Reserve Chairman Ben Bernanke used the term green shoots for the first time in an interview to CBS News’ 60 Minutes, and thus unleashed one of the most repeated jargons of the recession. It refers to early signs of life in barren economies.

Bank on ‘em
The global crisis began with the banks. Now, how are they doing? Some encouraging news there. Goldman Sachs and JPMorgan Chase have both reported profits. The US Treasury Bill-Eurodollar yield differential (TED), which measures risk inside the banking system, has come back to its long-term average. In plain English, it means banking players have become less risk-averse and more hopeful. 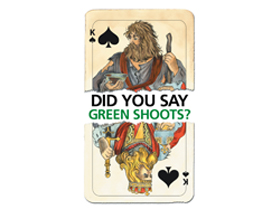 Image: Sanjay Patel
FROM RAGS TO RICHES: The beginning or just another false start?
Market Mania
Many look to the stock markets for cues about the health of the economy. There has been a global rally in stocks in the last three months. MSCI (World Index) has risen 36 percent, Dow Jones index 26 percent and the BSE Sensex 70 percent. If the markets were horses, the economy would surely be riding well.

Freight Forward
Commodity prices are a good indication of economic activity. The key measurement of freight movement across the world, the Baltic Freight Index, has trebled from its low seen in November 2008. Crude oil, which had fallen badly, has now recovered to $63 a barrel. Gold, a hedge against bad times, is easing off.

Dr. Doom in Gloom
Doomsayer economist Nouriel Roubini sees yellow weeds (signals that actually point to more problems in the coming months). He says employment is still falling in the developed world, profitability is not improving and debt is taking its toll. It is premature to interpret recent developments as economic revival.

Litmus Test
In the same television programme (60 Minutes) in which Bernanke first mentioned green shoots, he also proposed the ultimate test for them. Asked what will be a definite recovery signal, Bernanke said, “A large bank becoming successful in raising private equity.” No bank has managed to do that yet.

(This story appears in the 19 June, 2009 issue of Forbes India. To visit our Archives, click here.)

Tweets by @forbesindia
Can Roger Get His Mojo Back?
Wal-Marting in Amritsar