Karma at work: Vikas Oberoi tides over the realty lull

By delivering as per promised quality and timelines, Vikas Oberoi has transformed his father's small firm into India's second-most valued real estate developer 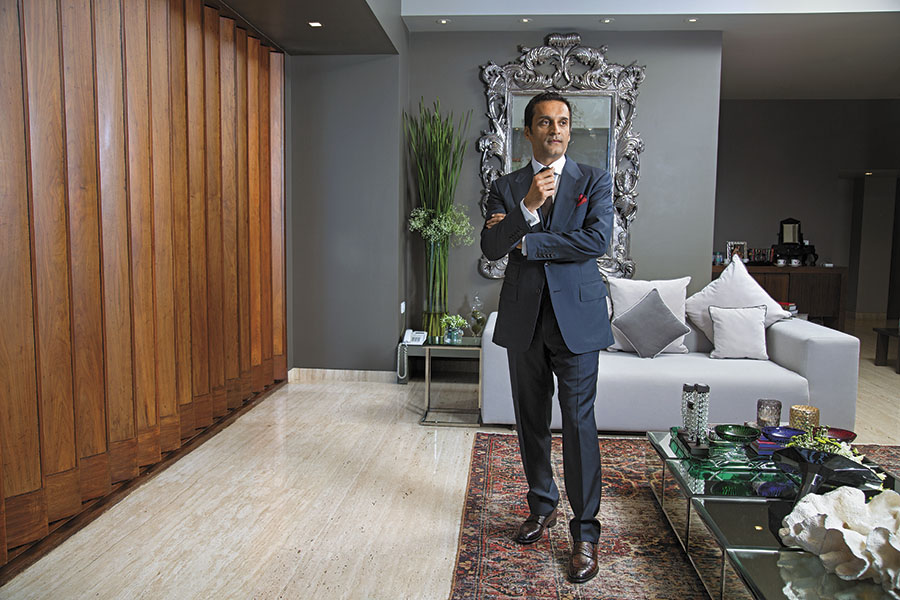 Vikas Oberoi, chairman and MD of Oberoi Realty, believes that honesty is not just a virtue but also a good business strategy
Image: Joshua  Navalkar

On a hot October day in 2015, around 400 people queued up in Borivali, in Mumbai’s western suburbs. No, they weren’t tech enthusiasts lined up in front of an Apple store to lay their hands on the latest iPhone. They were prospective home buyers, waiting outside a real estate developer’s sales office. Mumbai-based Oberoi Realty had just launched the sale of its new residential project, Oberoi Sky City, in the area, and they had turned up in droves.

No mean feat for a project that carries a minimum price tag of Rs 2.5 crore for an apartment. Not to mention the fact that four of the 10 residential towers planned were launched for sale, and in less than a year, 80 percent of the inventory of these four towers has already been sold.

“This is commendable in a scenario where the overall Mumbai property market remains sluggish, with most developers struggling to generate a good response to new launches,” says Adhidev Chattopadhyay, an analyst with Elara Capital, in a research note dated March 3, 2016. At that time, the inventory of unsold residential property in Mumbai had built up to 55 months of supply, according to the Elara report.

The response to the Borivali project wasn’t a one-off. A few months before Sky City, in January 2015, the developer had launched a residential project of twin towers in Mumbai’s eastern suburb of Mulund. Oberoi Realty has sold 80 percent of the inventory it launched for sale there as well.

This sustained ability to generate sales at new projects, despite a general slowdown in Mumbai’s residential real estate market, is noteworthy. Is there a secret sauce, Forbes India asks Vikas Oberoi, the company’s 46-year-old chairman and managing director. “Karma,” he says, referring to the spiritual principle that means that the intent and action of an individual influence his future. “One can use the principles of karma to build a better brand and that is what we have tried to do,” says Oberoi, who, in 2007, took over the reins of the company started by his father Ranvir Oberoi. His philosophy is simple—when you have good intentions, and deliver on promises, results follow. “We have been in the business for close to three decades and have been very consistent in delivering our projects according to the timelines and quality promised. We put our customers at the heart of our business and listen to them, study them, and predict their needs before they can articulate them.”

An alumnus of the Owner/President Management programme at Harvard Business School, Oberoi has used the karma principle as the bedrock of his approach. It seems to have worked. Oberoi has seen his personal fortune soar enough for him to make a comeback to the 2016 Forbes India Rich List. Oberoi is ranked 89th, with a personal net worth of $1.45 billion. He ranked 84th in the 2014 edition of the list, but didn’t make the cut in 2015.

By virtue of his 72.54 percent holding in the company, Oberoi’s personal wealth has risen in tandem with an increase in the share prices of Oberoi Realty over the last one year—its stock price rose by 21.42 percent to close at Rs 321.55 per share on the BSE on October 10. In comparison, the benchmark S&P BSE Sensex gained a modest 4.37 percent over the same period. With a current market capitalisation of Rs 10,913 crore, Oberoi Realty is India’s second most valued real estate company behind DLF—a noteworthy achievement considering the developer only operates in Mumbai.

Though a second-generation business leader, Oberoi has run his company with the mindset of a first-generation entrepreneur; and that probably has a lot to do with his keen interest in real estate.

In the ’70s and ’80s, Oberoi’s father was an investor in Mumbai’s real estate market, buying and selling apartments for a profit. In the process, he struck up friendships with several real estate developers and honed his understanding of the sector. Ranvir Oberoi then decided to turn developer himself. He liquidated all his investments in realty and started purchasing land instead.

“It wasn’t easy for him and it took around eight to ten years for him to build just two buildings (both in Andheri West),” says Oberoi. “But he set the platform.”

And Oberoi took to it all early. At 17, after attending classes at Mumbai’s Jai Hind College—where he was studying commerce—Oberoi would join his father by afternoon at his Nariman Point office. He observed, learnt and assisted his father for two decades, before taking over the reins of the company.

One of the earliest projects Oberoi worked closely on was in 2002, when the company successfully bid to acquire a 60-acre land parcel in Goregaon from pharmaceuticals company Novartis for Rs 107 crore. That plot has now been converted into Oberoi Realty’s signature development in Mumbai—Oberoi Garden City, a swanky residential-cum-commercial township which houses residential towers, a mall, two office buildings, a five-star hotel and a school.

It proved to be a business decision that the company is still reaping dividends from, as it continues to construct and sell new residential towers at this township. A new office space called Commerz II is also ready, with global MNCs like Teva Pharmaceutical Industries set to move in.

The next big achievement for Oberoi and his company came when, in 2007, it managed to secure an investment of Rs 675 crore—for a 10.75 percent stake in Oberoi Realty —from Morgan Stanley’s real estate investment arm. This was one of the earliest and largest foreign direct investments in the country’s real estate sector. The company followed this up with an IPO in 2010, through which it raised Rs 1,000 crore.

Cut to the present and Oberoi Realty has developed 39 projects across the city and delivered 9.18 million sq ft of real estate. It has another 20.61 million sq ft under development. This, when fully developed, has the potential to deliver a topline of Rs 25,000 crore and a net profit of Rs 12,000 crore for the company over the next five years, says Oberoi.

Oberoi attributes the present success of Oberoi Realty to the basics of business that he learnt from his father. “Whatever we do are derivatives of the fundamentals that he taught,” says Oberoi. “He was a big believer in not compromising on quality, being fair to customers and listening to them and improving operations.”

By believing that honesty is not only a virtue but “good business strategy as well”, he says, Oberoi Realty has been able to build credibility with stakeholders. 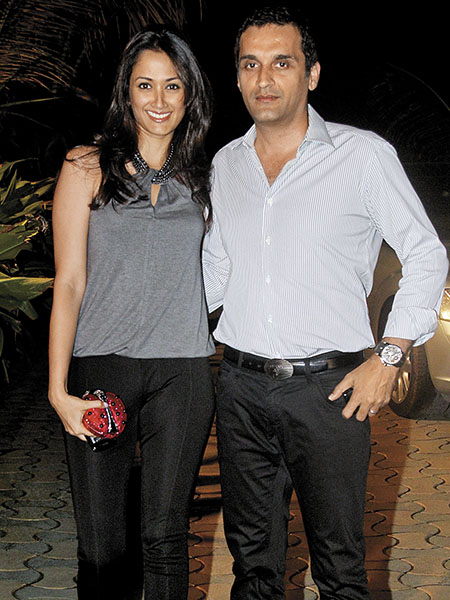 For instance, he adds, Oberoi Realty brings a real estate project into the market only when all the necessary approvals are in place; and the cash flow that it generates from a project are first utilised towards the completion of that particular development. Which is why Oberoi Realty isn’t affected by the new Real Estate (Regulation and Development) Act that was passed by Parliament in May this year. The landmark piece of legislation, enacted by lawmakers to bring transparency to the real estate sector and protect the interests of investors, is likely to choke supply in the market as projects that don’t have all approvals in place cannot be marketed any longer.

Not just customers, the efficient execution of a simple business model ensures that Oberoi Realty wins over lenders as well. As recently as in the first quarter of fiscal 2017, Incline Realty Private Ltd (a wholly owned subsidiary of Oberoi Realty) placed a new series of non-convertible debentures to raise Rs 750 crore at an impressive interest rate of 9.25 percent per annum.

“We got the debt real cheap. The interest rate at which we raised this money is similar to the cost at which many non-banking financial institutions raise money, just to lend it onwards,” Oberoi points out.

This is good news for the company since it is firming up its expansion strategy and may need to raise funds again. “With a healthy balance sheet, Oberoi Realty is well-poised to capitalise on opportunistic land deals,” the Axis Capital report says.

On the cards is a project being developed in Mumbai’s upscale Worli area called Three Sixty West; this is intended to be a confluence of super-premium residences and a five-star hotel, both to be managed by Ritz-Carlton. Oberoi, who has involved himself personally to ensure the success of this marquee project that can potentially generate $2 billion in sales, delayed bringing it into the market, despite having invested close to Rs 1,450 crore towards its development thus far. He wanted the apartments there to speak for themselves and therefore waited for the sample flat to be ready so that buyers would not need to rely on an artist’s impression. Since hitting the market in May 2016, sales from this project have taken off with meaningful velocity—apartments worth Rs 237 crore have been sold in the April-June quarter alone.

Not far from Three Sixty West is another plot of land in Worli, which Oberoi Realty had acquired from pharmaceutical company Glaxo in 2003. After several alterations in the planned end-use of that land parcel, Oberoi Realty has decided to put up a mall there, says Oberoi. This may prove to be an alternative to the only other shopping mall between Nariman Point and Andheri in the western suburbs: The very successful High Street Phoenix in Lower Parel.

Oberoi Realty’s experience of developing and operating shopping malls has been promising as malls are a high margin business, and its mall in Goregaon clocked a turnover of Rs 94 crore in FY16, 95 percent of which went straight to the company’s operating profits.

“We will seriously explore new lines of business at Oberoi Realty such as development of more shopping malls, schools and health care facilities and some of these may become big chains in the future,” says Oberoi.

Even in its existing residential real estate business, the scope for upside is significant. This is because the company is yet to recognise a major portion of the revenues that it has already earned on account of apartments sold, in its profit and loss statement. Every residential project needs to meet a certain threshold linked to proportion of sales and construction costs, before revenues generated from it can be recognised in a developer’s income statement. As on June 30, the booking value of houses sold by Oberoi Realty totals Rs 9,280 crore, of which it has recognised sales of only Rs 4,859 crore on its books. The remaining portion will reflect in the company’s topline over the ensuing quarters.

Plus there are other developments that aren’t in the public domain. “There are a lot of agreements that we have signed that we don’t speak of till plans crystallise further,” Oberoi says.

Tweets by @forbes_india
India is one of the growth drivers of our emerging markets strategy: Merck Healthcare CEO
Geolocation is changing the retail business model yet again