Oyo: There's room at the top

By guiding his hotel chain into diverse segments and markets, Oyo founder Ritesh Agarwal might soon be entering the billionaires' club 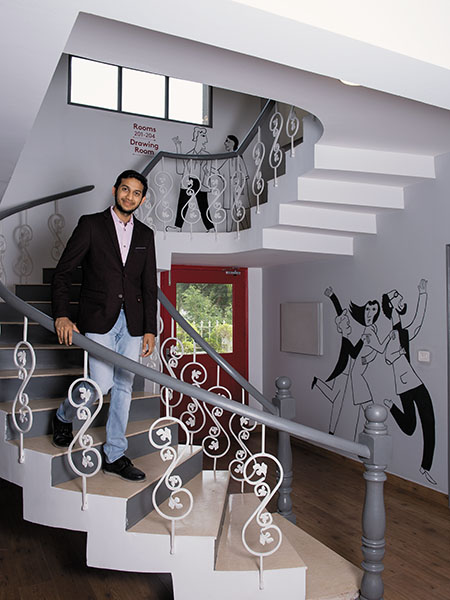 With an estimated net worth of over ₹4,400 crore, Oyo CEO Ritesh Agarwal could feature among the richest Indians in the future
Image: Amit Verma
Ritesh Agarwal spends the larger part of his Sundays preparing for his company’s weekly leadership meetings on Monday. His intent is clear: To “earn the respect of the management”.

Going by the growth numbers of Oyo, the hotel chain which Agarwal founded in May 2013, the 24-year-old is being unduly modest. With his company’s valuation rocketing to around $5 billion from $850 million in less than a year, it seems only a matter of time before the CEO of India’s latest unicorn, with an estimated net worth of over ₹4,400 crore, makes it to the Forbes India Rich List.

From a single hotel in May 2013 to over 12,000-plus hotel partners at present, Oravel Stays Private Limited, the parent company behind Oyo, now manages around 270,000 rooms in more than 350 cities across seven countries. Within a year of its launch there, Oyo’s business in China, a market that is known to be difficult to crack, is already half as big as India’s.

While Oyo began its business on the premise of providing clean, affordable hotels with standardised facilities to ‘budget’ travellers, Agarwal is “investing many years ahead”, propelling his company through diversification across geographies and segments. “We wear affordability as a badge of honour rather than it being something that we are worried about. One of our cultural values is, affordable is cool, cool is affordable. So even if we play in the mid-scale [segment], we will be better valued than any other mid-scale asset,” Agarwal says.

“If there was a single concern about Oyo’s growth, it would be that since growth has been so aggressively fast it is easy to give up on quality and consistency. This is an area where I would expect them to put more focus on,” says Manav Thadani, founder chairman of hospitality consulting firm, Hotelivate. 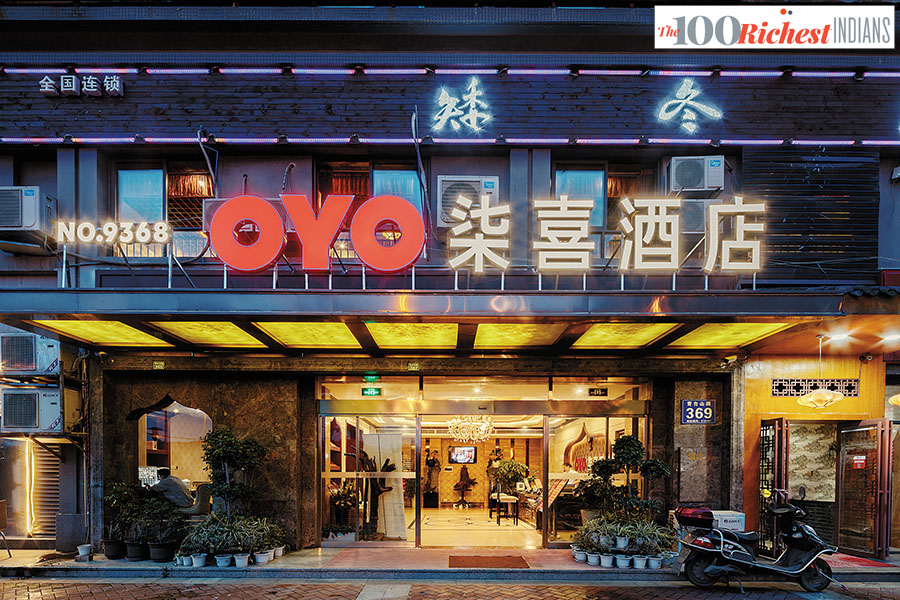 Over the years, Oyo has faced its share of problems, relating to the quality of some of its properties, services and safety issues. But some of those experiences have proved to be insightful.

“In 2016, for 5-6 months, we just said that it’s okay to not add assets, to not grow revenues... until we get our consumer experience benchmarked to the highest level, that’s the wrong long-term investment to make. Those were big learnings—your biggest investor, decision maker and designer is the customer. Even today, we are not at our best. But every year our promise is we are going to continue to learn and be the best in comparison to anything else,” says Agarwal.

The results are showing. The company claims to have clocked operating revenue of ₹125 crore in 2016-17, compared to ₹17 crore for FY15-16, registering 7x revenue growth year-on-year, on the back of 2x growth in room nights (an industry measure calculated by multiplying the rooms blocked or occupied, by the number of nights each room is reserved or occupied), and improvement in commissions (take rates). To put Oyo’s meteoric rise in context, its current valuation of about $5 billion (₹36,827.5 crore) is more than 1.5 times the combined market capitalisation of two of India’s iconic hotel brands: Indian Hotels, which runs the Taj chain of hotels (₹14,931.14 crore, as on October 17, 2018) and EIH Ltd, which operates the Oberoi group of hotels (₹8,956.49 crore, as on October 17, 2018).
To view the full India's 100 Richest 2018 list, click here

Underpinning such a rise are four competencies that Agarwal describes as Oyo’s “secret sauce”.
As an asset manager, Oyo is among the savviest franchisers or lessees of properties. Its in-house mobile application and software suite, named ORBIS, helps hotels predict how much their business will increase once they join the Oyo chain.

Oyo’s construction team of 300 full-time civil engineers ensure that all its projects are upgraded— whether it be wiring, piping, ceiling, flooring, interior design—to established uniform standards. The move has enabled the company to open 12,000 new rooms and roughly 500 projects every month.

Recognising that Indian customers checking into no-frills hotels expect much more beyond just infrastructure, Oyo has invested in 20 training institutes to educate its staff and young recruits on quality of service.

Lastly, Oyo actively monitors the distribution of its properties. “Every asset goes from an average of 20-25 percent occupancy to 70-80 percent occupancy within 45 to 90 days of joining the chain,” Agarwal says.

“This is where we have invested all our capital in the last four years. We have not invested so much on discounting or owner subsidies and so on. We did that when we had to compete in 2015 but since 2015-end, we only focussed on competency investments,” he adds.

The company’s thrust on digitalisation of its processes—coupled with an enhanced focus on operational transparency, performance-linked incentives for staff and property partners, standardised quality, strategic locations, competent pricing and customer-centric solutions—has ensured a loyal clientele. Agarwal says 95 percent of Oyo’s revenues come from either repeat customers or word of mouth.

What has worked equally well for Oyo is enjoying the trust of its leading global investors, including the Masayoshi Son-led SoftBank Group, Lightspeed Venture Partners, Sequoia Capital, Greenoaks Capital, Hero Enterprise and China Lodging Group. On September 25, Oyo became India’s second-most valuable startup after Paytm, securing $1 billion in fresh funding. This included a capital infusion of $800 million from SoftBank, Sequoia, and Lightspeed, with commitments for another $200 million.

While Agarwal is vehement about his commitment to expand in India, a market expected to hit $13 billion by 2020, much of the funding is likely to find its way into investments abroad. Adding to its presence in Nepal and Malaysia, Oyo launched its operations in China, the UK, the UAE and Indonesia in just over the last one year.

“I’m excited by the quality and ownership-orientation of the [Oyo] leadership team; the intensity, pace and quality of execution; the scale and economic characteristics of its India business, and the company’s demonstrated ability to replicate the model outside of India, thereby significantly expanding the addressable market opportunity,” says Bejul Somaia, partner, Lightspeed.

Prompted by SoftBank’s Son to venture into the lucrative $44 billion Chinese market, Oyo is already among the country’s top 10 hotel chains by room numbers. Agarwal cherishes the lessons he learnt during interactions with the Japanese business magnate, particularly that knowing one’s limitations is very important while being ambitious.

This wisdom is critical as he attempts to breach the Chinese wall. With over 129,000 rooms operated through a combination of franchises and managed hotels across China, Oyo is way behind the US-listed market leader Huazhu, which has almost 400,000 hotel rooms. Adding to the challenge is the company’s reliance on offline channels—walk-ins, third-party distribution, WeChat (mini app)—and unavailability on some key travel platforms.

“Their foray into international markets is a huge strength. Not too many companies get both their India and China strategy right the first time around and Oyo has proved it has the will and importantly the whereabouts to do both. I have always believed a company needs a momentum to grow and currently Oyo has managed to get itself into this momentum; I see it growing to other international markets as well, including Japan and Europe,” says Hotelivate’s Thadani.

Huge opportunities are beckoning, and Agarwal is quick to seize them. The company plans to pump $100 million into Indonesia and will look to launch in over 35 cities by 2019. With the 2020 Olympics barely a couple of years away, Oyo is all set to launch its operations in Japan, according to a Mint report in October. In September, Agarwal unveiled his plans to invest 40 million pounds ($53 million) in 10 British cities by 2020. And ahead of the Expo 2020 mega event in the UAE, Oyo has expanded its presence, targeting over 12,000 rooms in 150 hotels spread across the seven emirates.

“Invariably, a company is as good as its people. My biggest concern for the group is whether they have been able to hire enough good talent fast enough to carry on this stupendous growth. Another potential weakness is that they are also entering the brick-and-mortar side of the business by buying actual hotels for growth. This may dilute their focus,” says Thadani.

Though Oyo’s bottom lines are red at the moment, Agarwal is pleased that the company’s losses in 2016-17 were down by 27 percent year-on-year. Treating each hotel property as its production unit, the CEO says that net of all costs, his company makes more than 20 percent profit on an average across India. “So from our perspective, our business has substantial operating efficiency. This will mean that [after a] relevant period, we will start seeing cash in the bottom line,” Agarwal says.

Oyo manages around 270,000 rooms in over 350 cities across seven countries

He points out that any decision over capital-intensity related to brick-and-mortar business should be guided by the returns or yield on the investment. “So if you can deliver 55-60 percent returns on the capital employed, it is very attractive. It is better than the capital getting bond yields from the treasury,” Agarwal says.

“Even more interesting is, there are so many innovative financial structures where you can get that capex (capital expenditure) funded by third parties just because there are such attractive returns post your franchise fees. That’s how a lot of large successful hotel chains have made their books asset light by means of taking out their asset-heavy parts to third-party firms, who actually like asset-heavy stuff but they would like more stable cash flows,” he adds.

Agarwal is vocal about transforming Oyo from being one of South Asia’s leading hotel chains to the world’s largest hotel chain. He is open to a public offering as part of the process to unlock maximum shareholder value, but is also aware of his responsibility to keep his stakeholders aligned with his vision for the company.

“In our industry, new age technologies are going to keep disrupting what the current norm looks like. But there are three things that will not change—customers will still expect good locations, good price, and good quality. We think if we can get these three basics consistently better than anyone else, we will do a decent job. There will, of course, be many small journeys in this one mid-term journey, but all of them are worth it,” Agarwal says.

Tweets by @forbes_india
What is the function of fear in leadership?
Lakshmi Mittal: Steely resolve