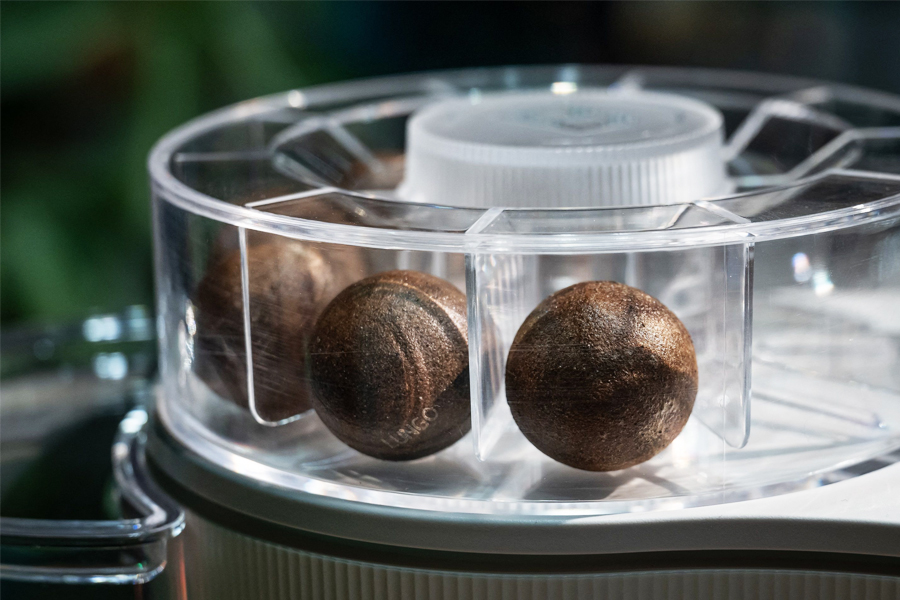 Switzerland's biggest retailer launched a new coffee machine invention on Tuesday—fully compostable coffee balls which it hopes will shake up the global market and take on Nespresso's global dominance.

The Migros supermarket chain hopes its innovation will cash in on consumers' environmental concerns by eliminating the aluminium and plastic waste of regular coffee capsules.

Rather than capsules, the new pods are balls of compressed coffee covered with a thin film made from algae.

With its new system, which took five years to develop, Migros is parking its tanks on the lawns of its Swiss compatriot Nestle, the giant in the coffee pod sector with its Nespresso brand.

The machines and coffee balls went on sale in Switzerland and France from Tuesday, but interest in other countries is "already huge", chief executive Fabrice Zumbrunnen said at the launch in Zurich, eyeing a wider rollout.

There are other compostable coffee pods on the market but Migros believes that this is the first system to use biodegradable balls.

The balls have to be used in the Migros CoffeeB system and are not compatible with other coffee machines.

Switzerland's largest employer said the new development was in response to the growing environmental consciousness of consumers, saying that some 63 billion coffee capsules are sold each year around the world, generating around 100,000 tonnes of waste.

Migros is currently a small player in the market.

According to market researchers Euromonitor International, the market share of its Cafe Royal brand was limited to 0.3 percent in western Europe in 2021, compared to 12.1 percent for Nespresso alone, while Nestle also owns the Nescafe and Dolce Gusto labels.

But Migros is hoping its compostable coffee system will gain it some market share.

It points out that the coffee beans used to make the biodegradale balls are sourced from sustainable crops, with fair trade and organic certification.

The cases the balls come in look like egg cartons and are made of recyclable materials. The coffee machines themselves are largely made from recycled materials, Migros said.