Milk Mantra has disrupted the dairy market in Odisha with its premium products. Can it find greener pastures in the rest of India? 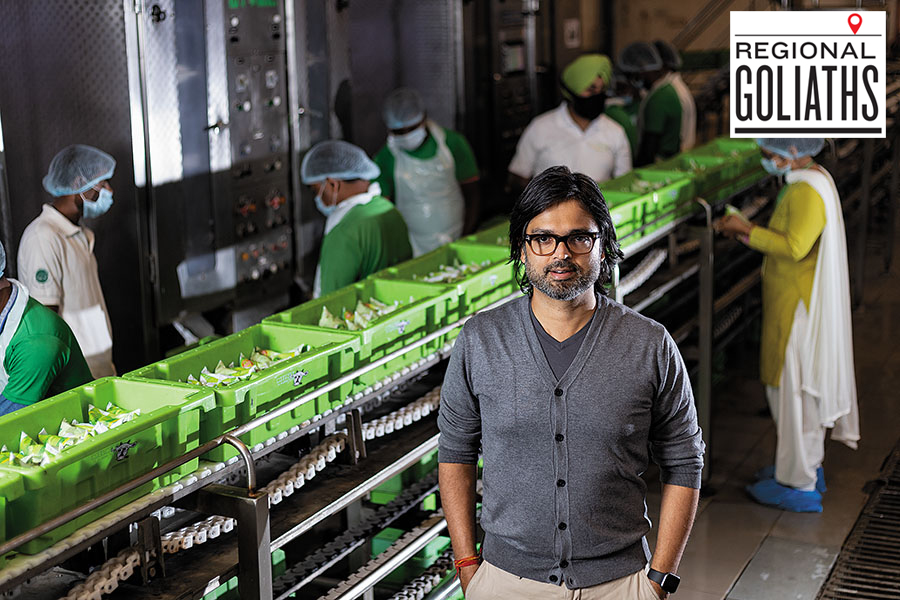 In 2011, it all boiled down to booth capturing in Odisha. Milk booths dotted the rural and urban landscape across the eastern state, including in its capital city of Bhubaneswar. There was one big entity controlling the booths—the state milk co-operative—which were the only way of doing dairy business. Every morning, people used to walk up to the booth to buy milk. Srikumar Misra, whose last stint was with Tata Global Beverages as director of mergers and acquisitions in London, was looking for ways to beat the booth.

The first-time entrepreneur founded dairy startup Milk Mantra in Bhubaneswar in August 2009 and spent two years raising funds from 22 angel investors and Aavishkaar Venture Capital. The goals were clear: Disrupt the traditional ways of doing business in the dairy sector. For one, the low-margin, high-volume nature of the game had to be changed. And this called for an infusion of technology. With these two guiding beacons, Misra flagged off the Milky Moo label.

The proposition was compelling: No more boiling, just open the milk pack and drink. The claim came on the back of a tech innovation. A unique three-layer ‘Tripak’ packaging, with a black inner layer, prevented light damage, and kept the milk fresh for a longer period. For consumers hooked onto the conventional practice of boiling the milk before consumption, ‘no more boiling’ was a big hook. That the milk was priced 20 percent higher than the rivals didn’t matter. “There were takers for a mass premium brand. One just needed to show value,” says Misra, who decided to go for ethical sourcing of milk in a transparent manner. A logical differentiated product extension was preservative-free, long-life Milky Moo paneer (cottage cheese). Both the items clicked.

The next disruption: The way milk was supplied. Misra went hyperlocal, arranged a fleet of 40 delivery boys, and reached out direct to consumers in the city. “There was no app. It was a nightmare. But it helped us go beyond the retail chain,” says Misra. Milk Mantra, he lets on, started by delivering to 600 households every day. Cycles crisscrossed the city, word of mouth spread wide into the hinterland, and the brand found its success mantra. From ₹4 crore revenue in FY12, sales jumped 11 times in two years to ₹44 crore in FY14. Over the next three years, revenue crossed ₹150 crore; and in FY19, Milk Mantra became a ₹200-crore company. In FY21 (ending March),  it is all set to post its first profit of just under ₹10 crore.

Misra explains why it took a decade to post profit. There is a cost that comes with an effort to become one of the best governed and tech-enabled brands in the dairy industry, which is infamous for running a non-structured business and cutting corners in quality and procurement. “Highest levels of governance comes with a price,” he says.

The choice for Milk Mantra, Misra underlines, was clear: To become profitable from Day 1 or build a company with highest levels of governance, transparency and ethics. “We opted for the latter,” he says.

Backers are happy with the performance. “What Milk Mantra has built could potentially be a model for launching and scaling disruptive consumer brands in India,” reckons Vineet Rai, CEO and managing director of Aavishkaar Venture Capital. As a pioneering entrepreneur in conscious capitalism, Rai explains, Srikumar has managed to set new benchmarks for the industry with the belief that doing good and being profitable need not be exclusive. Dairy is a unique sector and, by building their strength in a specific region, Milk Mantra has created, along with a competitive moat, an impactful change for the stakeholders in the community, he adds.

Milk Mantra’s challenger brand strategy, driven by innovation in mass product categories, turned out to be a game-changer. Disruption, coupled with sustained social impact, requires resolve and patience, says Prem Pavoor, partner and head of India at Eight Roads Ventures. Milk Mantra has stayed the course to emerge as a socially responsible and market-leading food brand in the region. The move to go deep as against wide worked out well, he adds.

For Misra, going wide was never an option. Not because of lack of capital. The entrepreneur always had the backing of marquee investors such as Aavishkaar Venture Capital, Fidelity Growth Partners, Neev Fund, Eight Roads Ventures and US DFC. What stopped him from spreading the company thin was his business ideology. “India is not a market where you can just throw capital, expand and grow furiously,” he says.

In FY2014, Milk Mantra learnt the harsh lesson that ‘speed thrills, but it might also kill’. “We grew absolutely brilliantly, but didn’t expect money to run out,” he recounts. Milk Mantra couldn’t pay vendors on time; even salaries got delayed. “Fortunately, we took some bridge debt and managed to close funding,” he says.

Two years later, Misra had tryst with another learning. This time, the crux was that even well-planned and capital-intensive strategies might bomb.

In 2016, Milk Mantra rolled out functional ready-to-drink healthy milk beverage MooShake. The move was bold, the brand was piloted in Bengaluru and Hyderabad, and a lot was spent in marketing. Consumer feedback too was encouraging.

There was one problem, though. The venture was turning out to be a cash-guzzler. “We didn’t want to burn a lot of capital. So we pulled back,” he recounts. The product, he explains, needed to be present in a dozen cities to reach some scale.

The lesson was to keep pushing
and growing inside the home market, build an impregnable fort and then think of moving out. The learning came handy when Milk Mantra was exploring the option to aggressively scale its presence in Kolkata, a market where it had a minuscule presence in 2018. The blueprint was ready, the team had hit ground zero, and the brand was all set to fan out. At the last moment, Misra resisted the temptation.

“We took a conscious call that let’s turn profitable first, reach a double digit Ebitda margin, and then look at growth,” he recalls. The decision helped.

Now, he claims, the company is better placed to push ahead with its wide regional play. “Fifteen percent market share in one state is always better than 1 percent in multiple regions,” he says, adding that there is no bragging point to score in being pan-India or a national brand.

For regional players, who often get tempted or pushed to explore new pastures, Misra has a word of advice. “Stick to your playbook,” he says. An ITC, Britannia and Amul might have had a different strategy. But again it took decades to achieve that scale. “My game is to build a regionally strong brand and take it ahead,” he says.

The company recently rolled out subscription app Daily Moo and is again going direct to consumer with more options, including breakfast. The plan now, he underlines, is to woo more users and build East India’s largest subscription-based food app. “It’s time to woo, and moo,” he smiles.