The MD & CEO, who will relocate to Germany later this year, turned around the fortunes of the company by ensuring a diversified portfolio, launching attractive products, and addressing quality and cost issues

It’s been a rather long journey for Guenter Butschek in India.  At the end of it, however, the German can definitely return a satisfied man. On February 12, Tata Motors—that claims to be India’s largest automaker—announced that Guenter, who had been leading the company since February 2016 has decided to leave the firm to stay on in Germany.  “Guenter Butschek has informed his desire to relocate to Germany at the end of the contract for personal reasons,” Tata Motors said in a statement. “He has kindly accepted the request of the board of Tata Motors to continue as the MD & CEO till June 30, 2021.” Guenter will be replaced by Marc Llistosella, a Daimler veteran.    Llistosella comes at a time when the company has become the third-largest carmaker in India, after years of struggle as a leading passenger car maker. The passenger vehicle category had been struggling for a decade until 2016, largely due to outdated models, poor service and the entry of numerous global carmakers. In January, according to the Federation of Automobile Dealers Associations, the apex body for the country’s automobile retail industry, Tata Motors was the third-largest carmaker by sales. The company held an 8.26 percent market share in the country, up from 5.63 percent in the year-ago period, after selling some 23,267 units of vehicles in India.

In December 2020, Tata Motors also cornered 7.25 percent of the passenger car market after selling around 21,000 units of its vehicles, and during the October-December quarter, it posted the highest sales in over 33 quarters or more than eight years.  In comparison, in January 2016, a month before Guenter joined the company, Tata Motors sold a paltry 10,728 units of passenger vehicles in the country. By the time he came on board, the company was selling 149,420 units of passenger vehicles a year. That grew to 172,504 by 2017 and 210,200 units in 2018. By 2019, the company was selling almost 100,000 units more than what it did in 2016 to close at 231,572. However, 2020 was a lacklustre year for the automaker, as vehicle purchases across the country fell significantly on the back of poor credit and the impending Covid-19 crisis.  In this financial year, after the company began sales in May 2020, they have grown to 165,146 units; between September 2020 and January 2021, the figure was over 21,000 units every month.  “The orders on passenger vehicles are at an all-time high with demand exceeding production and market share improving,” Butschek said on February 22, while launching the company’s latest offering, the Tata Safari. Originally launched in 1998, the company has brought the latest generation of the Safari to capitalise on the strong sales witnessed in the passenger vehicle category across the company’s portfolio. “Today, Tata Motors has emerged as a clear number three player in the passenger vehicles market this year, achieving a podium finish in the last eight months in a row.”

However, the climb to the number three position hasn’t been easy. 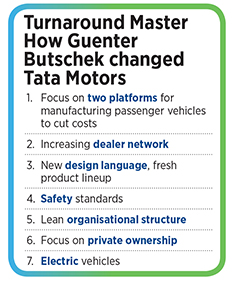 Much of the surge in sales in passenger vehicles is due to a rather diversified portfolio after struggling for many years with finding the right products. In January 2020, the company launched what it calls New Forever, an initiative to refresh its products frequently. The 'New Forever' range from Tata Motors includes cars such as the Altroz, Harrier, Tigor, Tiago and Nexon.

The company’s hatchback, Altroz, saw sales of 50,000 units in 2020, within a year of its launch. That translates to roughly over 4,000 units a month. Then there is the Nexon, which sold nearly 50,000 units between January and December last year, and has lately seen a surge in price. In January this year, Nexon sold as many as 8,225 units, its highest ever purchase since its launch in 2017.  “When I joined, our product portfolio was possibly not the most attractive one,” Butsheck had told Forbes India earlier. “We were not known to lead launches. Some even concluded that we had an outdated portfolio, while others were consistently bringing in modern products. We were under huge pressure because of lots of new launches by rivals. At the same time, we saw huge pressure on the contribution margin. Even Ebitda was negative. It was clear we needed to change the strategic direction. We needed to take a call on whether the business is sustainable and viable.”

Butschek had come to India with a reputation for restructuring companies to improve productivity and profitability. Between 2002 and 2005, as president and CEO of Netherlands Car BV, a joint venture between Daimler and Mitsubishi Motors Corporation (in 2012, Dutch coach maker VDC acquired the company and renamed it VDL Nedcar), Guenter was instrumental in its turnaround. 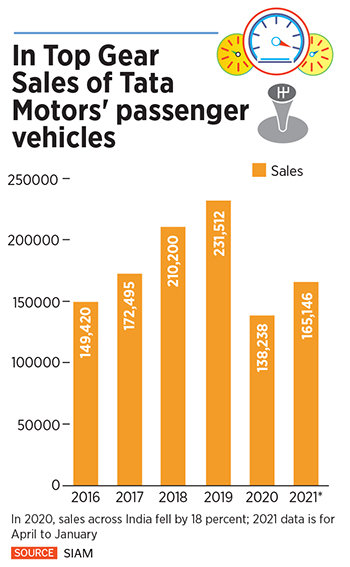 Between 2006 and 2016, Tata Motors’ domestic passenger vehicle business was struggling. The company had largely been stuck in the fleet taxi market and didn’t have any stellar offerings for private customers. During the same period, the company had launched its much-celebrated Tata Nano, then touted as the world’s cheapest car, before it was finally withdrawn from the market due to poor sales.  “Guenter has had a phenomenal role in turning around Tata Motors’ fortunes,” says Puneet Gupta, associate director of Automotive Forecasting at consultancy firm IHS Markit. “When he took over, the company was not even among the top three brands for buyers. It had lost its market share, the supplier side wasn’t doing well and even employee morale was low. He has definitely managed to turn that around.”  Much of that trouble, Guenter had earlier told Forbes India was because of issues about complacency, quality, cost and missing products. “For example, we did not even address 50 percent of the market because we had no product,” Guenter had said. “We invited the competition to take our space, and it had nothing to do with changes in the regulatory environment. It was just our inability to take quick actions and to translate changes into a proper product.”  Butschek began by bringing in radical changes, which included “six relevant angles of attack”. ‘Angles of attack’ is a phrase used in the aeronautical industry and refers to the angle between an aircraft wing and the direction of the wind, which helps in lifting the aircraft. For Tata Motors, the six angles meant topline cost reduction, improvement of core processes, customer centricity, new technologies, business models and partnerships, and a lean and accountable organisation.  First, the company decided to shift its entire product offering on two platforms (a design architecture that includes the underfloor, engine compartment, and the frame of a vehicle): Omega, developed by JLR and used in its wildly popular models Discovery; and Alfa, which was developed in-house. Having two platforms helped in reducing development and manufacturing costs, unlike earlier when there were multiple platforms for various models. Among its coming launches, Harrier was based on the Omega platform, and Altroz hatchback, launched in 2020, on Alfa. 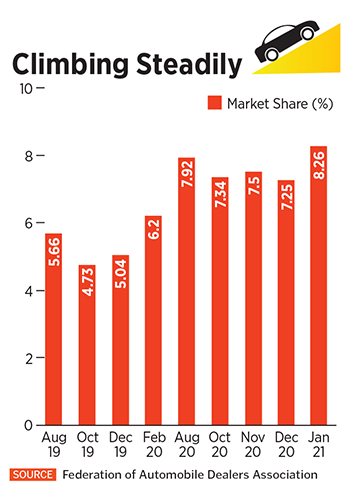 Then, there were the complicated layers of management that Tata Motors was infamous for. There were, Butschek says, 14 layers that affected overall productivity. The company brought that down to five, to ensure a lean structure and faster communication.  “For long, the Indian customer had stopped considering Tata Motors as a choice of purchase. Under him, Tata has managed to build very good-looking products, which boasts of very high quality,” says an industry executive on condition of anonymity. “Those two factors were instrumental in winning back the customers. He isn’t a magician and definitely can’t bring in the market share overnight. But it can raise its market share to 13 percent since many other carmakers are now struggling.”    Going Forward
The company also ensured there was a renewed focus on safety in vehicles. In 2018, the company’s hatchback, Tata Nexon, became the first made-in-India, sold-in-India car to achieve Global NCAP’s coveted five-star crash test rating. In 2020, the Altroz also received a five-star rating from NCAP.  “If you look at Tata Motors, there is definitely a before Guenter and after Guenter,” says Vinay Piparsania, former executive director at Ford, and former global consulting director with consultancy firm Counterpoint Research. “Its portfolio had some boxy models and he laid much of his attention towards ensuring a good product portfolio. Then there was also a focus on people, building premium products that appeal to customers.”  That apart, the company has also been heavily betting on its electric vehicle portfolio. In January, Tata Motors’ electric offering, the Nexon EV, had sold over 2,600 units. “Over the past few years, Tata Motors sharpened its focus on its product portfolio with much-needed attention towards the quality of the product,” says Arun Malhotra, former managing director of Nissan India. “It has ensured that the customers are treated to aspirational features and new technologies. But that hasn’t entirely converted to profitability since the pricing has been aggressive.” On February 22, Tata Motors launched the Safari at Rs14.69 lakh. “It has also been quite serious about its electric portfolio,” adds Malhotra.  It has also helped that the Indian automobile market—much like many other consumer products—is beginning to choose India-made vehicles, along the lines of the growing sentiment towards the government’s Make in India initiative. That has also meant that the company has seen a stark change in its approach towards customer needs and responding to market demands in refreshing its portfolio.   “The Nexon and Altroz have been doing well for the company since day one,” the industry executive quoted earlier says. “But with the Harrier, it didn’t take off that well since it was underpowered. Tata Motors managed to refresh the Harrier with better power and now the product has also taken off very well in the past few months.” Last year, the vehicle was given more power, a panoramic sunroof and other features to enhance its appeal.   Along the way, the company had also taken some tough calls, says Piparsania, including dropping brands such as the Indica and Nano, with a focus on rebooting the leadership. “One thing was fundamentally wrong in the old world: It was very hierarchy-driven,” Butschek had told Forbes India earlier. “It was bureaucratic, complex, and not agile at all.”  Now, with sales back on track, the company is also gearing up to launch a sub-compact SUV to capitalise on the growing SUV market in the country. “They are the real frontrunners in the passenger vehicle market now,” adds Gupta of IHS Markit. “Across the urban and rural market, the company is clearly being considered as an option and the dealer network has also seen a sea change with many young dealers coming in. That apart, it now has a diversified portfolio with diesel and electric options.”  Back in 2016, when Guenter joined the company, he was clear about where he wanted to take the struggling automaker. “When I joined, we had an intensive discussion on how to approach the issue of stopping the bleeding in volume, market share, and the financial side,” Butschek had told Forbes India earlier. “The basic assumption was that we would have enough headroom over three years to get fit for the future, while going for structural changes in management processes.”  Clearly, he seems to have done his trick. That means, Llistosella has some big boots to fill.