'Fire of Love' charts romance and death of volcano-chasing scientists

Playing in a limited number of US theatres, the documentary from National Geographic and prestigious indie distributor Neon ("Parasite") is earning rave reviews and generating early awards buzz 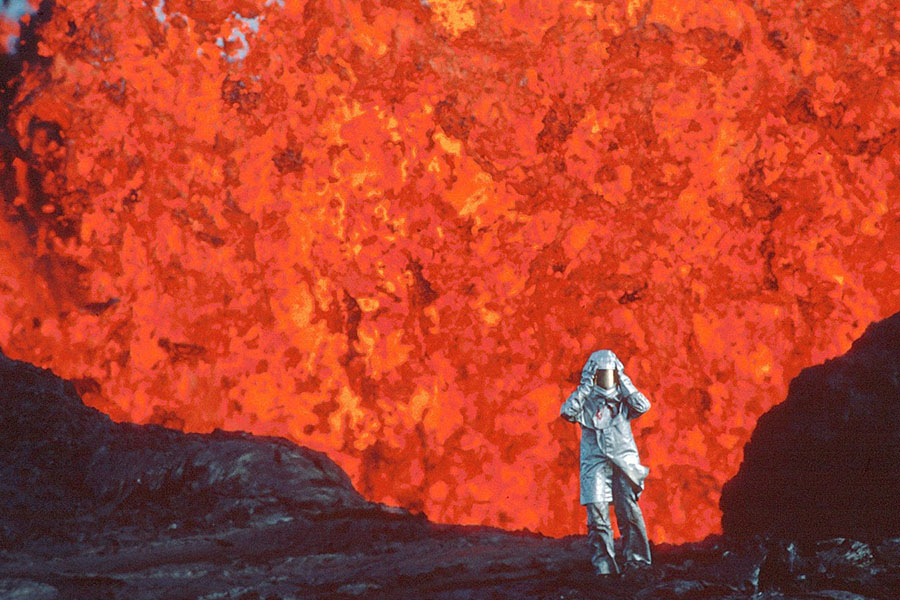 French scientists Maurice and Katia Krafft were brought together, and eventually killed, by their shared love of volcanoes.

Now the married couple are the subject of "Fire of Love," a new film constructed from hours of dazzling, terrifying and occasionally quirky footage they shot close to —and even inside—erupting craters.

Playing in a limited number of US theaters, the documentary from National Geographic and prestigious indie distributor Neon ("Parasite") is earning rave reviews and generating early awards buzz.

Director Sara Dosa first stumbled upon the pair's "spectacular imagery" while researching another documentary about Icelandic volcanoes—but was drawn more to the "love that just radiates behind the lens, unlike anything else."

For 25 years, the Kraffts had traveled the world together in search of active volcanoes, writing some 20 books and making five feature films, plus countless television programs and lectures.

But they are perhaps best remembered today for their deaths side-by-side on Japan's Mount Unzen volcano, which erupted in 1991 after nearly two centuries dormant, sending a fatal cloud of gas and ash surging down its eastern flank.

"Fire of Love" begins and ends with this tragic information—yet it spends the bulk of its running time on the "love triangle" between the couple and their lifelong obsession.

"Once we really learned about them as people... and the fact that they were married and also seemed to be in love with volcanoes—that's when we thought, 'okay, we want to make a film of these people,'" Dosa told AFP.

"We wanted to tell kind of a mythic love story that was told through the language of volcanoes," she added.

"That's what drew them together in the first place, and that was the propulsive material, the fuel of their relationship."

While Maurice was the more extroverted and ostensibly thrill-seeking of the pair—he paddles in an acid lake and plots to kayak down an active lava stream—Katia was similarly courageous in the face of peril.

Their gung-ho approach drew criticism from some of their scientific peers, but "I don't think that we ever found them reckless, quite honestly," said Dosa.

"They ultimately did lead a deeply meaningful life and die a meaningful death. And so much of that was this pursuit of love," she added.

"I'm sure many people will say perhaps it was a reckless love, but for us, it was the way for them to live."

After witnessing the staggering 1980 eruption of Mount St Helens in the northwestern United States, and the Nevado del Ruiz disaster that killed up to 25,000 Colombians five years later, the pair reoriented their work to lobby governments for better evacuation planning.

"Since they were some of the only people really capturing those images, they were uniquely suited to do that advocacy work," said Dosa.

"And that is literally what they were trying to do as they died on mountains in 1991."

Aside from informing modern audiences about the pair's work, Dosa hopes the film can remind viewers that the planet is not simply "a resource to be capitalized upon."

"These kinds of stories about the aliveness, the sentience of the Earth, are all the more important to counteract the exploitation," she said.

Making the film during the pandemic and "having these guides, Katia and Maurice, teaching you how to navigate the unknown, and who knew how to reconcile fear -- that was such a salve and a refuge for us."

And then there is the aesthetic beauty of the footage itself, full of glowing red lava and alien-looking volcanic landscapes, all captured in a distinctive style with "the hallmarks of the French New Wave."

"For example, in the cinematography, there was a lot of playful snap zooms, which reminded us of films in France from the 60s and 70s," she said.

"And their own writing—they authored nearly 20 books—almost recalled the bombastic and playful spirit of narration in Truffaut films."

Dosa herself drew on that style, including the documentary's own, breathy narration.

"One of the great narrative devices of the French New Wave was love triangle stories," said Dosa.

"And for us, that was something that felt appropriate. Katia and Maurice truly did seem to have a third in their relationship—volcanoes."