From the beginning of "Peaky Blinders," when the show's characters were still emerging from the shadow of World War I, masculinity and violence have been inextricably linked, and throughout the stylish BBC gangster drama, Tommy Shelby, played by Cillian Murphy, is in a league of his own 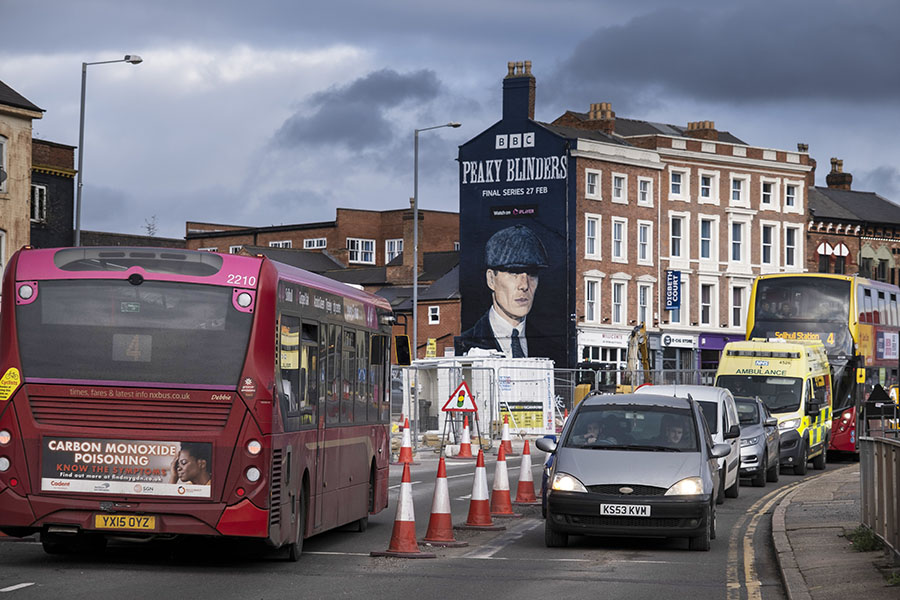 Peaky Blinders mural of the character Thomas Shelby played by actor Cillian Murphy promoting the final series of the popular BBC drama by street artist Akse P19 in Digbeth on 23rd February 2022 in Birmingham, United Kingdom. Peaky Blinders is a British crime drama television series created by Steven Knight, that premiered on BBC Two on 12 September 2013. The series is primarily set in Birmingham, England, and follows the exploits of the Shelby crime family in the aftermath of World War I. Akse P-19 is an artist known for his photo-realistic portraits. (photo by Mike Kemp/In Pictures via Getty Images)

This article contains spoilers for Season 6 of “Peaky Blinders.”

Throughout the stylish BBC gangster drama (which airs on Netflix in the United States), Tommy Shelby (Cillian Murphy) is in a league of his own. Although he’s the second-born brother, the ambitious Tommy quickly takes his place as head of the family upon returning home to Birmingham, in central England, after fighting in World War I.

The show’s creator, Steven Knight, has said that he sees the show as a western, and Tommy is the outlaw at its center. While the show has spawned many “Peaky”-inspired haircuts and themed events, Tommy, as the story’s defining figure, is the character most fans seek to emulate. (In 2020, he was voted the “greatest TV character of all time” by the male-oriented British website LADbible.)

Although the show has now ended — the final season arrived on Netflix on June 10 — Tommy’s influence is set to continue, as Knight has plans for a feature film set during World War II.

From the beginning of “Peaky Blinders,” when the show’s characters were still emerging from the shadow of World War I, masculinity and violence have been inextricably linked. The gang succeeded by using physical force as well as cunning, not to mention those razor blades they supposedly sewed into their caps. “The only way to guarantee peace is to make the prospect of war seem hopeless,” Tommy argues in Season 3.

When “Peaky Blinders” premiered in 2013 in Britain, it joined a TV landscape littered with male antiheroes: “Breaking Bad” and the transformation of Walter White ended the same month that “Peaky” debuted; “Sons of Anarchy” — with the violent biker Jax Teller at its center — aired its penultimate season that year; and viewers were six seasons into Don Draper’s journey up the corporate ladder in “Mad Men.”

Tommy fits in well among these other dangerously and seductively flawed leading men. Through his character, though, the show has also explored the impact of battlefield trauma, prefiguring the more explicitly mental health-conscious TV that we see today.

In Britain, “Peaky Blinders” has received a steady stream of criticism for its stylish depiction of violence, and last year Nick Fletcher, a member of Parliament, said Tommy, specifically, was a negative role model. “Is there any wonder we’re seeing so many young men committing crime?” Fletcher said. “These programs make crime look cool.”

Watching a show like “Peaky Blinders” is not enough, on its own, to lead to violent behavior, according to psychologist Douglas Gentile, whose work focuses on the impact of mass media. But “the whole time you’re watching a violent show, you’re rehearsing aggressive fantasies,” he said in a recent video interview, and the more you watch, “the more desensitized you become to both media and real world violence.”

Public conversations around male-perpetrated violence have shifted dramatically since “Peaky Blinders” debuted nearly a decade ago. The emergence of the #MeToo movement popularized the concept of “toxic masculinity,” which broadly refers to a model of manhood that encourages men to “suppress emotion and mask distress” and can lead to aggression, according to the American Psychological Association.

“Peaky Blinders” has undergone an evolution of its own, focusing less on physical fights and more on the internal battle within Tommy, said Anthony Byrne, who directed Seasons 5 and 6.

“Violence is very overused,” he said in a recent phone interview. “Season 4 was all about gangsterism. I felt like the show had gotten away from what it should continue to be: the journey of Tommy’s psyche.”

In the final season, for example, Byrne cut a “classic Peaky Blinders” fight scene featuring Tommy, Arthur and some dockworkers. “It just didn’t work and it felt wrong,” he said. “Time had moved on. Tommy had moved on.”

From the beginning, Tommy has struggled with what we now understand as post-traumatic stress disorder, stemming from his time in World War I. In Season 6, he suffers from seizures, with his body reflecting the inner turmoil wrought from fighting at home and abroad.

This vulnerability is essential reason viewers root for the character, according to Julie Taddeo, a historian who focuses on British television. “He can be a very unlikable character,” she said in a recent phone interview, “but he’s relatable because we now have a more nuanced understanding of war and trauma.”

We bid farewell to Tommy at a time in which ideas around masculinity are becoming more expansive, and public figures in Britain like rapper Stormzy and Prince Harry have shared their own mental health struggles.

As a result, “our expectations and demands of male characters have definitely expanded and intensified,” Taddeo said. “We now want a lot more from these men.”

This has been reflected in shows like “Derry Girls,” whose central father, Gerry (Tommy Tiernan), is more than comfortable expressing his emotions as the characters navigate “The Troubles” in Northern Ireland; “After Life,” in which Ricky Gervais plays a widow whose grief leads him to consider suicide; and “This Is Us,” in which Randall, the lead character played by Sterling K. Brown, struggles with anxiety.

Throughout “Peaky Blinders,” the question of redemption hangs over Tommy. In the final season, Tommy says he’s learning kindness from his children, and in the closing scenes of the show, he chooses not to shoot a man who has wronged him. Instead, he walks away.

“Tommy rides in on a black horse and out on a white horse, so there’s hope for him,” Byrne said. “Where he goes, nobody knows, but there will be a feature film, so the story will continue.”

Tweets by @forbesindia
More than other generations, Gen Z believe they'll be rich one day
Yoav Zeif, CEO at Stratasys, on advances in 3D printing and the challenges in the way of greater adoption