In January 1969, Lindsay-Hogg was the brash young film director who tried to charm and cajole John Lennon, Paul McCartney, George Harrison and Ringo Starr through warring agendas as they hashed out new songs and gave their last concert on a London rooftop 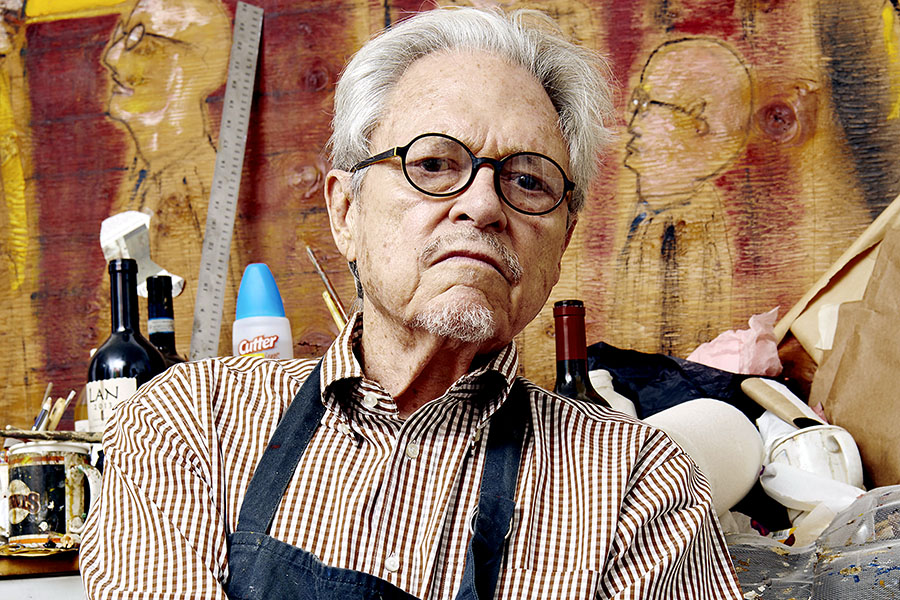 The filmmaker Michael Lindsay-Hogg at his home in Hudson, N.Y., June 10, 2022. Lindsay-Hogg, who attracted some social media scrutiny after his appearance in Peter Jackson’s “Get Back,” finds peace in New York’s Hudson Valley. (Vincent Tullo/The New York Times)

In January 1969, Lindsay-Hogg was the brash young film director who tried to charm and cajole John Lennon, Paul McCartney, George Harrison and Ringo Starr through warring agendas as they hashed out new songs and gave their last concert on a London rooftop. Soon after that, he started shaping his nearly 60 hours of footage into the documentary “Let It Be,” a film largely unavailable since its initial theatrical run in 1970.

Lindsay-Hogg’s footage, as well as more than 100 hours of audio that he recorded with his crew, some of it with hidden microphones, got new life when Jackson cleaned it up and reassembled it for his nearly eight-hour series. McCartney and Starr, along with most critics, hailed “Get Back” as an upbeat corrective to Lindsay-Hogg’s more somber take.

So would he like to talk about his time with the Beatles?

“That was a small part of a long career,” he said in the sitting room of his three-bedroom Civil War-era house in Hudson, New York.

He had a point. In the so-called Swinging London of the 1960s, Lindsay-Hogg made a name for himself as a creator of the music video, directing promotional films, as they were then called, for the Beatles, the Rolling Stones and the Who a decade and a half before MTV. In the early 1980s, he was again a trailblazer, as the co-director of “Brideshead Revisited,” an 11-hour adaptation of the Evelyn Waugh novel that was a forerunner of prestige television dramas like “The Sopranos.” He is also a Tony-nominated stage director, painter and author. Oh, and Orson Welles may very well be his biological father.

It’s almost too much to get through. No wonder he had a request, delivered in a deadpan voice: “Please make the entire article about my painting.” But eventually, over the course of three interviews, we got around to John, Paul, George and Ringo.

Lindsay-Hogg, 82, lives with his wife, Lisa Ticknor Lindsay-Hogg, a former fashion model and casting agent, in a narrow cream-colored house in this river town nestled into lush green hills. The rooms have a lived-in feel, with book stacks rising from table tops and the walls blanketed with paintings, many of them scavenged from flea markets, and photos from his varied career.

“I am the maximalist,” he said. “Lisa is the organizer.”

Sprinkled among the decorations are posters from past projects, including “Agnes of God,” a 1982 Broadway play he directed, for which actress Amanda Plummer won a Tony, and “The Object of Beauty,” a 1991 film written and directed by Lindsay-Hogg, with John Malkovich and Andie MacDowell in the lead roles. A sculpture of a rabbit head sits on a credenza. He got it in Harare, Zimbabwe, when he filmed Paul Simon’s “Graceland: The African Concert” in 1987.

Although he was born in Manhattan and educated at Choate, the Connecticut prep school, Lindsay-Hogg spent six years of his childhood in Hollywood, mingling with William Randolph Hearst, Olivia de Havilland and Humphrey Bogart.

His mother was actress Geraldine Fitzgerald, who starred opposite Laurence Olivier in William Wyler’s “Wuthering Heights” in 1939. His father — at least, according to his birth certificate — was Sir Edward Lindsay-Hogg, a baronet of Rotherfield Hall in East Sussex, England. The younger Lindsay-Hogg inherited the title upon the elder’s death in 1999.

“Technically, I could be a ‘Sir,’ but unlike Mick and Elton, I didn’t earn it,” Lindsay-Hogg said, referring to his friends Mick Jagger and Elton John.

The question of paternity has long hovered over him. His mother, born in Ireland, made her American stage debut opposite Orson Welles in a 1938 revival of George Bernard Shaw’s “Heartbreak House.” The production was directed by Welles at the Mercury Theater, the New York repertory house he had co-founded. When Lindsay-Hogg was a teenager, his mother told him of the rumors that Welles, best known for his 1941 film classic “Citizen Kane,” was his biological father.

Decades later, his mother, who had Alzheimer’s at the time, gave a cryptic confirmation that Welles was his father — then seemed to contradict it. Lindsay-Hogg got an answer when he spoke with Gloria Vanderbilt, a friend of his mother’s whom he had dated in the 1980s, while working on his 2011 memoir, “Luck and Circumstance.”

He hasn’t abandoned show business entirely. In recent years he directed several episodes of the web comedy series “Tinsel’s Town,” about a YouTube star in Hollywood, and he is writing a script for a film he hopes to direct, set in 1946 Nevada.

On the wall next to the staircase were two black-and-white close-up portraits of Jagger in his early 20s, both stills from the 1960s British pop music show “Ready Steady Go!,” the program that gave Lindsay-Hogg his start in directing at 24, a few years after he dropped out of Oxford. On the third episode he directed, the Rolling Stones performed “Play With Fire,” and Jagger made an immediate impression.

In 1968, around the time of the release of the Rolling Stones album “Beggars Banquet,” Jagger asked him to direct a TV concert film. A few weeks later, Lindsay-Hogg called Jagger and said, as he recalled it: “ ‘I’m going to say seven words to you: “The Rolling Stones Rock and Roll Circus.” ’ And he got it. It just sounded right.”

The production, filmed during a grueling one-day shoot on a London soundstage, included performances by the Who, Jethro Tull and a supergroup called the Dirty Mac featuring John Lennon, Eric Clapton and Yoko Ono. The Rolling Stones closed the show. Now considered a classic, the film was shelved until 1996, when it premiered at the New York Film Festival.

“In late January ’69, while doing ‘Let It Be,’ I showed a rough cut to Mick, Keith and Allen Klein,” he said, referring to guitarist Keith Richards and the group’s manager at the time. “When it was over, they thought the Who were great, but didn’t think the Stones were as good as they could be. Keith said, ‘If it were called “The Who’s Rock and Roll Circus,” I wouldn’t mind.’ ”

Lennon’s appearance came as little surprise. Lindsay-Hogg had been working with the Beatles since 1966, when he directed promotional films for “Paperback Writer” and “Rain.” Two years later, he was at the helm for the videos for “Revolution” and “Hey Jude.”

In late 1968, McCartney asked him to direct a television special meant to accompany the album the band was about to record. Lindsay-Hogg was enthusiastic, but he knew from experience that “four Beatles would be four opinions.”

“Giving an idea to them was like putting a lump of meat in an animal’s cage,” he said. “One of them would pick it up and sniff it and toss it to the next one to take a bite.”

After 10 days of filming, it became clear that the production he had envisioned — a concert in a cinematic location, with Lindsay-Hogg pushing for an amphitheater in Libya, as well as a separate show documenting the rehearsals to run as a kind of teaser — was not going to happen. In the end, he did what he could to salvage something of the original idea by nudging the Beatles to the roof of the Savile Row building that housed Apple Corps, the group’s media company. There they played a glorious lunchtime set as passersby peered up quizzically from the sidewalks below.

Drawing from the dozens of hours that did not make it into “Let It Be,” Jackson turned Lindsay-Hogg into a major character in “Get Back”; his efforts to maintain some kind of momentum against long odds provided the three-part series with a narrative through-line. When “Get Back” started streaming, however, Lindsay-Hogg found himself in a vulnerable position: The man accustomed to a behind-the-camera role was now in the spotlight.

The Beatles skipped the premiere, and “Let It Be” has never appeared as a DVD or on streaming platforms. Most fans know it from washed-out videocassettes; and its reputation has suffered thanks to remarks made by Starr and McCartney. “There was no joy in it,” the Beatles drummer said last year on “The Late Show With Stephen Colbert.”

Lindsay-Hogg disagrees with that assessment.

“There are moments of great sweetness,” he said. “No matter where you put the camera, no matter how you edited it, they loved each other. Anybody who sees ‘Let It Be’ again will find that.”

He believes the tone he struck is not really so far from that of “Get Back,” which he said he found “terrific.” Jackson’s account, he added, had the advantage of being five times longer, its images and sound enhanced by 21st-century technology. “He had canvas to fit a Rubens painting,” he said, “and I had a canvas to fit a little David Hockney painting.”

On July 20, 1969, the day Neil Armstrong set foot on the moon, the four Beatles and some family members attended a private screening of a rough cut of “Let It Be” in Hanover Square. They seemed pleased, Lindsay-Hogg said. Afterward, he and his girlfriend at the time, British actress Jean Marsh, went for a late dinner at Provans, a restaurant in the Fulham section of London, with Paul and Linda McCartney, Lennon and Ono, and Apple executive Peter Brown.

“It was a friendly meal,” he recalled. “We had a couple of bottles of wine and mostly talked about our differing childhoods. They were happy with the way things were going, certainly, otherwise there would have been no dinner.”

“They were grown men, not the Fab Four of the early 1960s,” he added. “And they were OK with being shown navigating relationships which were old, but changing.”

The film was a victim of bad timing, in his view. By the time of its May 1970 premiere, the Beatles had broken up. Traumatized fans saw it as “a breakup movie: ‘Mom and Dad are getting divorced!’ ” he said.

Apple has said in the past that it had plans to rerelease “Let It Be” at some point, and Lindsay-Hogg believes it deserves a fresh viewing; but he doesn’t dwell on his time with the Beatles, or the past in general, he said.

“I have a very, very good memory,” he said. “It may be because I never took all the drugs. But I’m very not-nostalgic. Nostalgia is, for me, like the vermouth that I do not put in my martini.”

Tweets by @forbesindia
'Evolution gone crazy': What makes sea dragons so strange?
Startup Fridays S2 Ep. 13: 'In any pursuit, strive to be in a place where you can add value' — Sunil Thomas