For Stella McCartney, fashion must ditch leather or die trying

As the vegetarian daughter of Paul and Linda McCartney, Stella got a green head start in life, transferring her eco-friendly upbringing to fashion 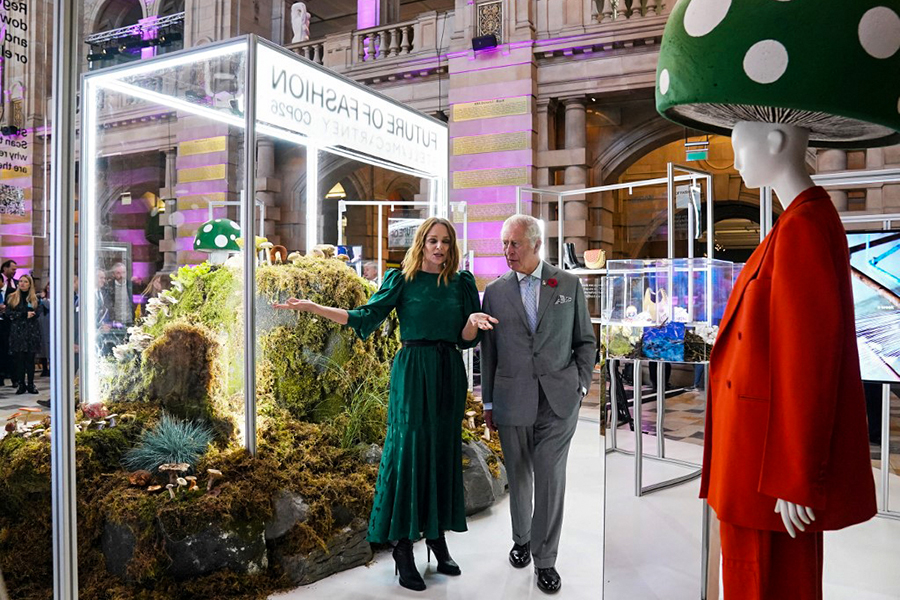 Britain's Prince Charles, Prince of Wales (R) speaks with British designer and sustainability advocate Stella McCartney as he views a fashion installation by the designer, at Kelvingrove Art Gallery in Glasgow, Scotland on November 3, 2021, during the COP26 Climate Conference. - Focus at the COP26 summit turned to how the world will pay for its ambitions to quit fossil fuels and help vulnerable nations survive climate change, as campaigners urged caution over promises of billions from financiers and governments Wednesday.
Image: Owen Humphreys / POOL / AFP

The fashion industry must prepare to eliminate waste and take radical stances such as ditching animal leather altogether, said British designer Stella McCartney.
In an interview with AFP on the sidelines of the UN climate summit in Glasgow Wednesday, McCartney said that fashion houses must "swap out bad business with good business" for the sake of the planet.
"Sadly we are one of the most harmful industries to the environment," she said.
"And I'm here to really kind of showcase the future of fashion and show everyone that basically there is another way and we have some solutions."
As the vegetarian daughter of Paul and Linda McCartney, she got a green head start in life, transferring her eco-friendly upbringing to fashion.
Despite initial scepticism from peers, McCartney has never used leather products since entering the industry three decades ago.
The Kelvingrove Museum and Art Gallery in Glasgow is holding an installation during COP26 showcasing the innovative, low-carbon materials used by McCartney over the years.
Celebrity visitors to the installation included Prince Charles and actor Leonardo DiCaprio, both of whom are outspoken on environmental issues.
They include mycelium, which can be extracted directly from fungus and used as an animal skin substitute for making bags and shoes.
Also on display is NuCycl, a technology its makers say is capable of making natural and synthetic textiles infinitely recyclable.
"We're hoping, definitely, that these are viable solutions and we just need to bring them to the world's attention," said McCartney.

Fashion is the second largest manufacturing sector on Earth, responsible for up to 8 percent of all carbon emissions, according to research by the World Resources Institute.
The main challenge is getting more sustainable materials into clothes that will be worn by billions of people across the world.
"I mean, that's the intention," said McCartney.
"We're hoping, definitely that these are viable solutions and we just need to bring them to the world's attention."
McCartney once caused a stir with a video she released denouncing the mistreatment of animals within the industry, and extracts of that video were being shown at the exhibit.
"We need to let people know that, you know, hundreds of millions of animals are being killed every single year for fashion, for leather, for skins and animal glues," said McCartney.
Just as fashion tastes change over time, so are younger generations less willing to wear animal products, she said.
"I think we're in a moment though, where... we are becoming irrelevant very quickly and ... generation X, Y, and Z will not buy into bad fashion, evil fashion, dirty fashion."

After three decades in the industry, McCartney spoke of the lessons she had learned about the waste created by designers' endless drive for innovation.
"People wear fast fashion maximum up to three times before they throw it away. And that's creating over $500 billion worth of waste," she said.
"That, for me, is a business opportunity. So I'm trying to flip everything around. Something like, 'Hey, you know what? You can take that waste. And I'll show you a hoodie that I can make completely out of waste.'"
As well as being more ethical and better for the planet, McCartney believes that animal substitutes have a much stronger selling point.
"We're replacing it with a better product. It's nicer for them to work with it," she said.
"Who wants to work in an abattoir?"

Tweets by @forbesindia
Blue Java: How blue food is making its way onto the menu
Photo of the Day: Diwali trading