Foreigners flock back to Spain for bull-running fiesta 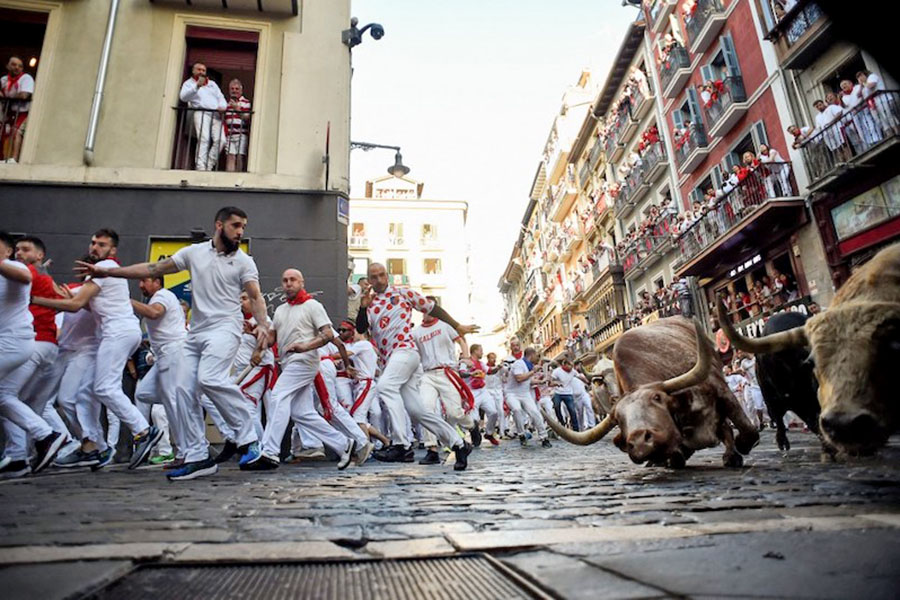 Participants run ahead of bulls during the "encierro" (bull-run) of the San Fermin festival in Pamplona, northern Spain on July 7, 2022. Image: Miguel Riopa / AFP

As soon as Peter Millington heard that Spain's San Fermin fiesta would be held again this year after a two-year absence due to the pandemic, he started making travel arrangements.

The 38-year-old British financial advisor has been a regular at Spain's most famous bull-running festival since he first attended the annual event in Pamplona as a university student, and was keen to return.

Millington said he booked his flight from London and made hotel reservations in February, just days after Pamplona's mayor announced that San Fermin would likely go ahead this year.

"There is nothing else like it, it's totally unique," he told AFP in the northern Spanish city on Wednesday when the nine-day fiesta officially opened.

"I had to be here," he added, gesturing towards the sea of revellers merrily drinking around him, most dressed in the traditional all-white outfit and red scarf.

The festival, immortalised in Ernest Hemingway's 1926 novel "The Sun Also Rises", has long drawn large numbers of foreigners, including many like Millington who return year after year.

And with global travel on the rebound since most coronavirus pandemic restrictions have been lifted, the foreign visitors were back in force in Pamplona this year.

Among the regulars who returned this year was Hemingway's writer grandson John Hemingway, who came from Montreal where he currently lives.

"It is good to be here," said the 61-year-old, who was attending San Fermin for the 10th time.

"This is a breath of fresh air after all this craziness of lockdowns and social distancing."

Hell of an experience

But it is best known for the bracing daily test of courage against a thundering pack of half-tonne, sharp-horned bulls.

Every day at 8:00 am, hundreds of daredevils race six fighting bulls along an 850-metre (2,800-foot) course from a holding pen to Pamplona's bull ring.

The bulls then face matadors and almost certain death in bullfights in the afternoon.

About 40 percent of all runners come from abroad, with Australia, the United States and Britain accounting for the greatest number of foreigners, according to the Pamplona city hall.

The vast majority of participants are men, with barely a female face visible among the runners -- although there were plenty in the cheering crowds.

During the last run in 2019, Pamplona town hall said just six percent of runners were women. This year's figure will only be available at the end of the festival.

Roger Sandhu, a 30-year-old businessman from the United States, had just taken part in the first bull run on Thursday.

"As soon as we turned the corner, the bulls were right there," he said.

"It was one hell of an experience."

But for Jack Denault, a 50-year-old Canadian who now lives in France, the festival's biggest draw is the "camaraderie" that exists among festival goers.

"The bond you make with the people you celebrate with lasts forever," said Denault, who rents the same apartment every time he comes for the fiesta.

"There are so many of us that come back year after year, and it is such a great reunion."

Denault said he had participated in over 80 bull runs in San Fermin, but he said they were only a "small part" of the festival.

He has come to every San Fermin festival since 2008 and has a tattoo of a bull's hoof on his arm for each year he has attended.

"I will keep coming as long as my body allows it," said the retired hotel sector worker.

Timothy Pinks, a 60-year-old London driver who has attended San Fermin regularly since the 1980s, said he was thrilled the event was back on this year.

"It is paradise on earth. Nine days of Christmas for us adults," he said as he had drinks with a large group of friends in a central Pamplona square.

Tweets by @forbesindia
A pop star tried to reconcile Russia and Ukraine. War ruined that
Not just Tata Motors, Mahindra too has now built India's most valuable electric vehicle company