Already catching headlines as a meat alternative, the edible insect market is expected to grow into a billion-dollar global industry in the coming years. These no-crunch burgers are part of an image makeover that aids the trend 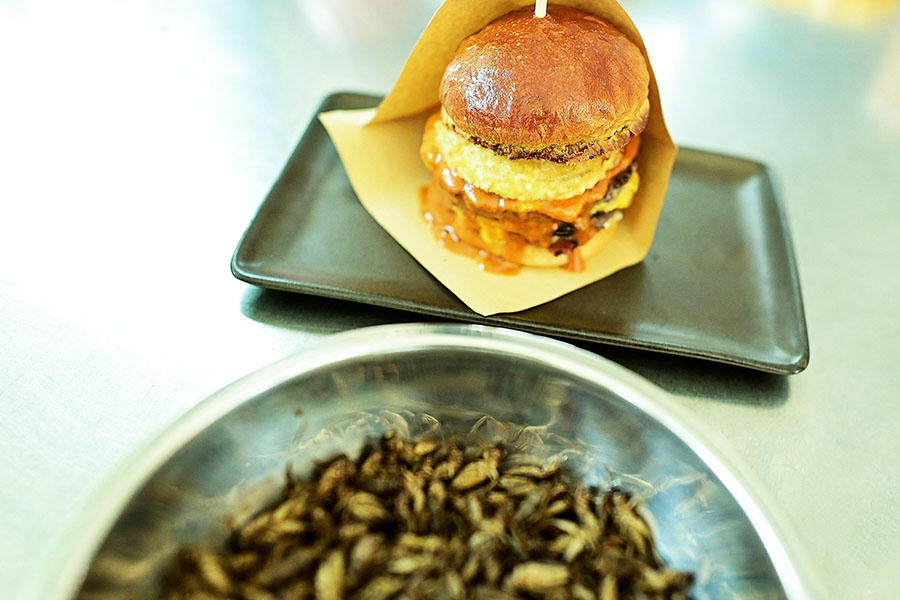 A plate of "Cricket-burger" and crickets at a restaurant in Bangkok. Image: Manan Vatsyayana / AFP

There's no crunch or crackle, but crickets are on the menu at one Bangkok pop-up serving fusion bug burgers, demonstrating the latest way to incorporate the protein-rich meat into food—direct from Thailand's farms.

Already catching headlines as a meat alternative, the edible insect market is expected to grow into a billion-dollar global industry in the coming years with many adopting creepy-crawlies into their diets as a result of climate damage.

Thailand's Bounce Burger is the newest cricket kid on the block with its cricket-beef burgers, sausages, cricket balls and even power bars and cookies.

"Crickets don't have to be on street vendor's stalls that are served only with soy sauce," said Poopipat Thiapairat, co-owner of Bounce Burger Restaurant.

"They can be burgers, bakery, soft cookies or even paprika seasoning used to flavour french fries—these are all possible."

Crickets are a source of protein, as well as containing a host of beneficial vitamins, and are among the most commonly eaten insects by humans globally.

Despite this, Poopipat admitted the spindly arthropods were in need of an image makeover as they were "not really consumer-friendly".

"If we open a restaurant and serve cricket-based food that doesn't look like crickets then the consumers might be more open to trying," he said.

"The problem with crickets is that they get stuck in your throat," he said, explaining his firm removes the "hard" parts of the insect—like the wings and legs—leaving the fleshy body.

"It's the same concept as beef or pork where we don't eat the bones."

While Thais have long eaten bugs as a tasty snack, Pawan Thedthong—nibbling on a bug at a Bangkok fried stall—acknowledged others might be put off.

"You can see foreigners walking past and they wouldn't dare try the insects," the 24-year-old said.

"If they are processed into something more appealing then people could eat them more."

Among the biggest appeals of cricket farming is that its environmental impact is far less than rearing cows or pigs.

While some parts of the world are only now discovering the benefits, Thailand already has thousands of insect farms.

Many of those farms cater to animal feed needs, but some are now focused on edible insects for humans—such as Bricket R&D Cricket Farm, established in 2019.

On the outskirts of Bangkok, the farm supplies 160 kilograms (353 pounds) of crickets monthly direct to the Bounce kitchens.

The process is carefully controlled, with the insects chilled to sleep, washed, and then harvested for meal prep, explained managing director Thanaphum Muang-Ieam.

While for the burgers the crickets are laid on top,for sweeter items the Bounce chefs use a powder taken from the insects and baked into the goods—from power-bars to biscuits.

As for the customers?

"The taste is good. The sauce blends over the smell of the crickets," 53-year-old customer Anut Sottthibandhu commented as he munched.

"I don't feel like there are insects in my burger," he added with a grin.

Tweets by @forbesindia
Major financial institutions of Wall Street come together to set up digital assets exchange with on-chain settlement
BTS' RM: From K-pop star to the patron of the arts