A dash of pivots, a sprinkle of co-investing rivals and heavy seasoning of food and beverage players... UrbanPiper has played the right tune so far. But can the restaurant management platform now scale up its game? 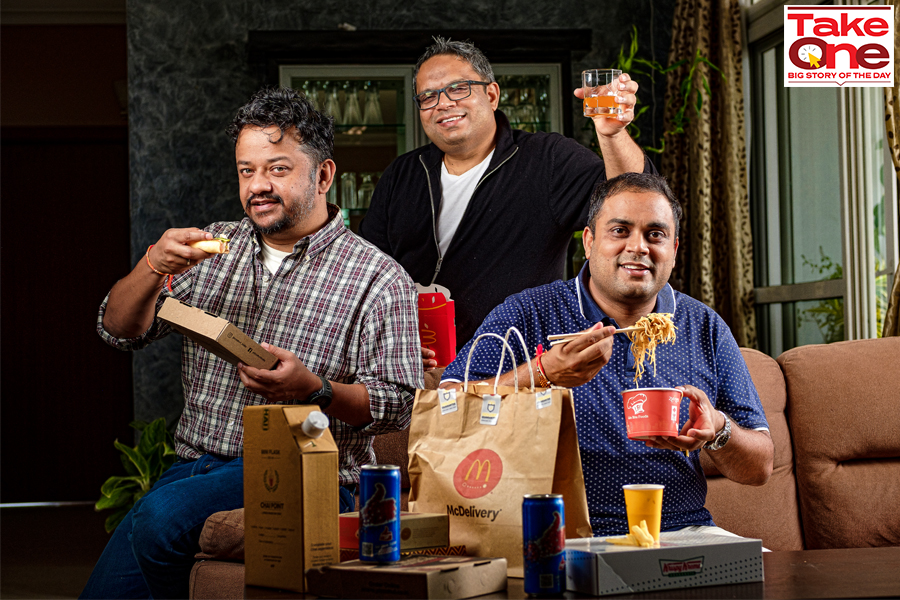 It was ‘shock and awe’. Or let’s call it the first thumb rule of the food business which Saurabh Gupta gulped last year. It was peak summer in 2021. After completing his masters in electrical engineering from the University of South California and working in the US for close to a decade, Gupta co-founded UrbanPiper with Anirban Majumdar and Manav Gupta in 2015. UrbanPiper started as a viral, social and loyal tool for restaurateurs to understand customer behaviour, improve retention and expand sales. By 2021, it morphed into a full-stack restaurant management software-as-a-service (SaaS) platform, counted Kumar Vembu founder and CEO of GoFrugal, Axilor Ventures, Sequoia India and Tiger Global among its backers, and was getting ready to add new players to its cap table.

After months of prepping, Gupta was set to close the deal with a global biggie in 2021. A few days before signing, though, came the ‘shock’. The German online takeaway food company wanted to become a strategic partner. In short, it meant investing in UrbanPiper with the intent to acquire the company at a later stage. Gupta and existing investors were not prepared. “We still had a lot of juice left,” recalls Gupta. He declined to take the money, and UrbanPiper’s funding sprint came to a screeching halt before the finish line. Here was the first lesson: Don’t count your chickens before they hatch.

Full of beans, Gupta quickly cooked another plan. This time destiny played its bit in adding a dash of luck. Zomato’s blockbuster IPO in July last year gave Gupta some food for thought. He knew maverick food entrepreneur Deepinder Goyal and called to congratulate him. After exchanging pleasantries, Gupta got into the act. “We are raising our next round. Would you like to invest?” he asked, taking his chances. To his surprise, Goyal was game. Egged on, Gupta now added another ingredient to the conversation. “Would you mind if I also get Swiggy on board?” he grinned.

Goyal again didn’t disappoint. He knew Gupta’s dilemma. UrbanPiper was a neutral platform and not having both the food aggregators on the cap table would hurt the prospects of the startup which had speeded up integrating restaurants into Zomato and Swiggy. Goyal, though, remained sceptical about the ambitious plan. “Go ahead, but I don’t know how you would execute it,” he said. The explicit consent from Swiggy’s rival whetted Gupta’s appetite. “I knew Sriharsha Majety, and I was sure I would bring the two rivals together,” he reasoned. 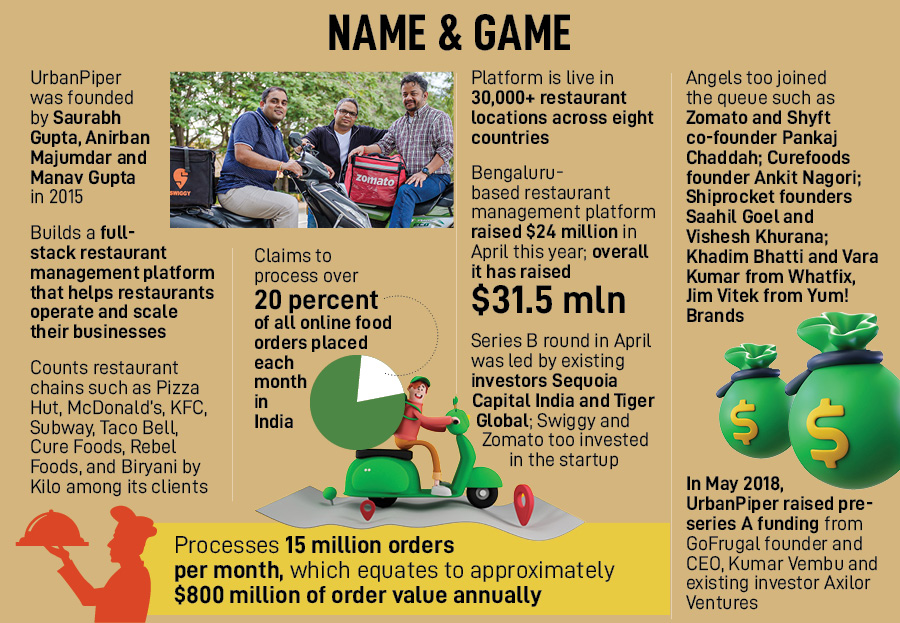 Now came the second lesson: If you haven’t understood the first lesson, then learn again. “Dude, what are you talking about?” quipped Swiggy’s co-founder, who took a while to warm up to the idea of co-investing with Zomato. After a month when the funding food was all set to be served, Gupta learnt his third lesson: The garnishing has to look pleasing to all eyes. In business parlance, the meaning was simple. Gupta needed to manage the interests of competing and diverse sets of funding partners in a fair manner. One of the online food aggregators, Gupta refuses to divulge the name, wanted a bigger share of the pie in UrbanPiper. The idea was unpalatable to others sitting at the table. The pot kept simmering and after a while Zomato and Swiggy picked up 5 percent each, and the series B funding of $24 million finally concluded in April this year.

Meanwhile, back in 2003, Gupta learnt his first life lesson. “A degree from a decent college helps,” rues the entrepreneur who finished his electrical engineering from an inconspicuous institute in Maharashtra. “I couldn’t get through IIT or any premium engineering schools,” he recounts. After four years of graduation came a bitter realisation. There were no takers for the young engineer. “I even applied at BPOs but got rejected,” he rues. The recruiters mocked Gupta’s poor verbal skills in English. Enraged, the young engineer decided to go for higher studies, cracked competitive entrance tests and completed his masters from the University of South California.

The gambit worked. Over the next few years, Gupta found himself in the fast lane: A breezy life, a big house, two cars and a hefty pay cheque. In 2012, Gupta was bowled by a wrong one from destiny. He rushed back to India to take care of his ailing father, took a sabbatical for over a year and then went back to restart his life. It was easier said than done. He came back to India, co-founded InfraEyes, a medical device startup based out of Bengaluru. The venture didn’t succeed, and the gritty founder tried his luck now with the food business and co-founded UrbanPiper. The simple idea was to build a social app for businesses to go viral.

There was one problem, though. The B2C venture didn’t have takers. All interested parties, Gupta recounts, wanted a white label solution. For UrbanPiper it meant that the solution and services sold would not have its branding. “We went B2B and there was an instant uptick,” he says, adding that the venture closed the first fiscal with an operational revenue of around Rs 30 lakh. The next year, it inched to Rs 50 lakh. Then came the first speed breaker. Gupta and his partners realised that there had been a bunch of companies in the field of building a viral, social and loyal tool for restaurants but couldn’t scale the venture. UrbanPiper too was stuck. 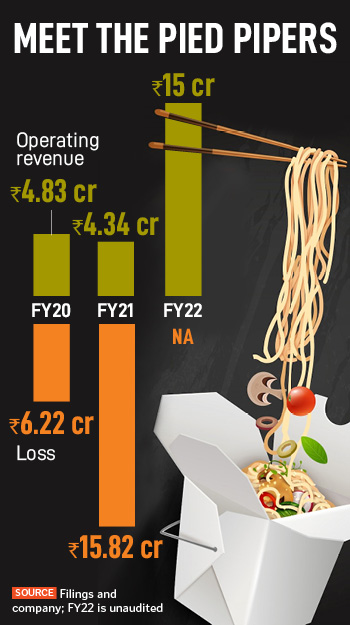 Gupta quickly pivoted. UrbanPiper now started enabling restaurant owners to get their business online. The move worked, and business scaled. But after a year, it hit another bump. Food aggregators like Swiggy and Zomato had started gaining scale, all kinds of food and beverage players were hopping on to the online food ordering platforms and the business of building individual websites for restaurants found itself on the backburner. UrbanPiper again pivoted. The threat from Swiggy and Zomato was transformed into an opportunity. The startup became the backend tech partner for restaurant players who were struggling to streamline operations and grapple with surging orders from online delivery players.

Fast forward to 2022. UrbanPiper has notched up decent scale. It processes 15 million orders per month, which equates to approximately $800 million of order value annually; the platform is live in more than 30,000 restaurant locations across eight countries; and Gupta claims that his startup processes over 20 percent of all online food orders placed each month in India. Funding and revenue too have kept pace. While the Bengaluru-based restaurant management platform has raised $31.5 million from a clutch of marquee backers such as Axilor Ventures, Sequoia India and Tiger Global, operational revenue has jumped over three times from Rs 4.34 crore in FY21 to Rs 15 crore in FY22. The losses too have come down during the same period, claims Gupta, who declines to share the unaudited numbers for the bottom line. “We are now striking a revenue run-rate of Rs 40 crore,” claims Gupta.

The backers are excited with the growth story. While the restaurant ecosystem has evolved rapidly with changing consumer needs over the last few years, pandemic-induced disruptions have made food merchants more than eager to arm themselves with technology, adopt digital channels and upgrade their operations. “UrbanPiper is at the forefront of this digital transformation and is strategically positioned to build infrastructure connecting digital players to merchants in the F&B space,” says Shraeyansh Thakur, principal at Sequoia India.

Industry experts decode the secret sauce of UrbanPiper. Explosion in food delivery due to online food aggregators made the backend foodtech startup an indispensable tool for F&B players. “It has become very handy as an integration tool,” reckons KS Narayanan, a food and beverage expert. The startup has a point of sale (PoS) system, customer relationship management (CRM) tool and inventory management system, which have removed a big headache for all kinds of restaurants, he adds. Though the startup has had a muted growth over the last two years, it is now well-placed to make the most of the opportunity that the food delivery industry offers. “They can only scale from here,” he says.

Gupta, for his part, does intend to scale at a furious pace. “We are building a global SaaS foodtech company from India,” he says, adding that UrbanPiper has operations across eight countries and will further scale the venture. But will the zeal to fan out furiously come at the cost of sustainable growth? Gupta underlines that he has learnt his lessons. “Quality of revenue is more important than quantity of revenue,” he says. What also matters, he lets on, is the kind of customers the startup wants to work with rather than having a random approach. “Slow is better, and spending wisely is the name of the game,” he shares his biggest learning.

Tweets by @forbesindia
Bootstrapped Lotus Herbals is not afraid of MNC invasions. Here's why
Why the XC90 gets overlooked among the competition?