'We can dream again': The song that marked Argentina's World Cup campaign

The catchy tune of 'Muchachos', which alludes to deceased Argentine superstar Diego Maradona looking down from heaven on modern-day hero Lionel Messi, had reverberated through the stadiums of Qatar—belted out by supporters with patriotic fervour 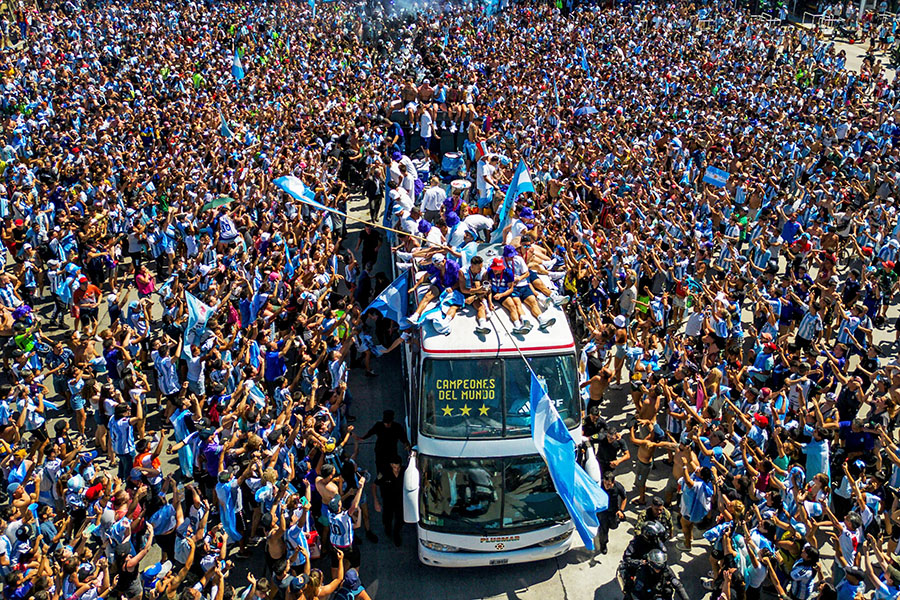 "Muchachos", which translates as "guys," was Number 1 on Spotify in Argentina Tuesday with more than half-a-million plays, and was heard on repeat in central Buenos Aires where huge crowds of fans gathered to welcome the victorious team.The catchy tune, which alludes to deceased Argentine superstar Diego Maradona looking down from heaven on modern-day hero Lionel Messi, had also reverberated through the stadiums of Qatar -- belted out by supporters with patriotic fervor.

The song by fusion rock, ska and salsa band La Mosca Tse-Tse first came out in 2003, and originally contained the lyrics: "Muchachos, tonight I'm going to get drunk."

It was later adapted, and adopted, by football club fans -- among them 30-year-old teacher Fernando Romero.Romero this year rewrote the lyrics and dedicated them to the Albiceleste national team. His version soon went viral."What is happening is so crazy, so great that it makes you dizzy," Romero told Argentine media during the World Cup campaign."It started at home one day when I was cooking, I started to get emotional on my own, just thinking about it, I wrote it on my phone, and it stuck."Also read: Football in India: What will it take to put the spotlight on players?The new lyrics start "I was born in Argentina, the land of Diego and Lionel, of the boys of the Falklands whom I will never forget."

It laments all the finals the team has lost and sings of a famous victory over Brazil in the 2021 Copa America that allowed Argentina to dream of a third World Cup -- which the team went on to claim in Qatar.

'An explosion of feelings'

"The song is huge!" said 19-year-old Nicolas Arias, among the throngs celebrating in the capital."It describes my country well, my people. It has an emotional side, it is creative, it is an explosion of feelings. It is complete, awesome!" raved the youngster.

Pablo Mendoza, who came to Buenos Aires with his wife from La Plata some 60 kilometers (35 miles) away, said for him, the song "represents everything. It speaks of Diego, of the Argentine soldiers of the Falklands... Look!" he said as he showed off a tattoo on his leg of the archipelago at the center of a 1982 war with Britain.

For Romero, the song was meant as something "to encourage the players, to make them feel proud to be Argentinian."Also read: Unparalleled passion: What makes Northeast India the talent factory of football

Encourage them it did, as Messi and his team fervently sang "Muchachos" on their tournament bus or in the changing rooms, to Romero's eternal pride.The song has since been re-recorded with Romero's words by Mosca Tse-Tse, who wants to do another, updated version after Sunday's victory.

"So much has happened," singer Guillermo Novellis has said. "It is a song that unites all Argentines and that makes us happy. It no longer belongs to us."

In the meantime, the song has been given another, organic update by fans who have changed the lyric: "We want to win a third" World Cup with "We have won a third."

Tweets by @forbesindia
Diageo India CEO Hina Nagarajan: We are cash positive and have the money to invest where the opportunities are
From 'Euphoria' to 'Emily in Paris' and 'Bridgerton': Which TV show had the biggest influence on fashion?