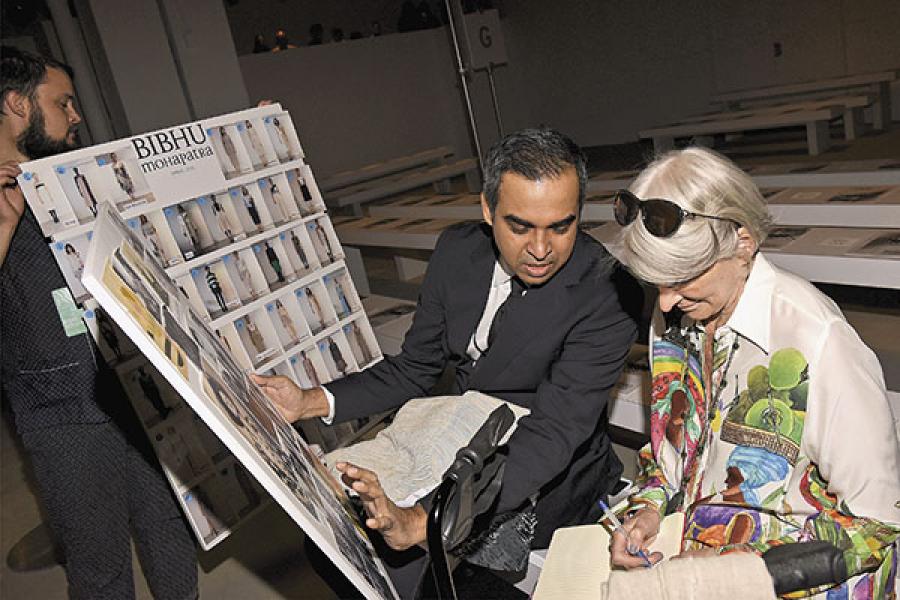 Image: Vivien Killila / Getty Images
Fashion designer Bibhu Mohapatra has come a long way since leaving Rourkela, Odisha, for the US in the ’90s

There is a familiarity about New York that leaves you with a sense of déjà vu. From cinema to literature, the city has been so well documented that you feel like a local from the get-go. Which is why when I landed there a few weeks ago, nearly 20 years from my last visit, it felt sort of old hat. Even the dominant sound of the city—sirens constantly blaring—was the same. The people and populace still have that itchy, scratchy attitude that stems from hyper individuality. I like it. There is an unwritten motto: So long as you don’t step in my way, you are welcome to go your own way.

It was an unseasonably warm November, the week of the New York City (NYC) Marathon. Everyone was running, hard. Spandex-encased bodies whizzed past at all hours. Quintessential New York, where pace is par for the course.

Fashion designer Bibhu Mohapatra’s professional trajectory is closely intertwined with this city, having begun his career here in the late ’90s. A dear friend now, I was on his turf to see how he worked and played. The first time we met, he had already launched his own label (Fall 2009). Fresh from his successes as designer at Halston and J Mendel, Bibhu had come home to show his work to leading fashion magazines. He wanted feedback. He wanted criticism. So he set up appointments with editors and fashion directors and took his book across. His humility was so genuine that you almost missed the hunger behind it.

Apart from a brief cameo in a Bollywood film (Teen Patti, in 2010, starring Amitabh Bachchan) together that sealed the deal on our friendship, I was drawn to Bibhu for his incredibly cerebral approach to fashion. He needs a significant back story before he starts on his mood board. His inspirations, therefore, span the globe. Pick a collection at random: Spring 2015, Nancy Cunard and her avant-garde style. Fall 2013, Man Ray’s photographs of muses Kiki de Montparnasse and Lee Miller. Fall 2009, his debut collection, Daphne Guinness meets Japanese warrior. His most current collection (Spring 2016) focussed on Annemarie Schwarzenbach, a controversial journalist from 1930s Europe, and her love for Bauhaus art.

His translations are never iterative—they are inspired. You will see his signature style of uber femininity emerge as the strongest element. This is his special tribute to his mother who passed away after he left Rourkela in Odisha for the States, in 1995. You can still hear the ache in his voice when he talks about her, and on his “altar” (his word for his inspiration board) her photograph has a permanent place. He considers it his starting point for any project. It is also the reason he works with the Odisha government to revive the craft of Sambalpuri. Phase one of the project is already done and 2016 holds the promise of even greater involvement.

His only deviation was his Fall 2015 collection. His muses might have been female—Maud Gonne and Camille Claudel —but the line was about loss. His father had passed away in December 2014 and Bibhu had toned down his collection. Flowers were replaced with digital prints and he referenced home by adding turmeric yellow, indigo and clay red to the collection. The bereavement was even more poignant when a month later, in January 2015, Michelle Obama stepped off Air Force One onto Indian soil wearing his dress. “She’s wearing Bibhu,” he texted, with many exclamation marks. We both knew he was wishing his father had lived to see that moment. 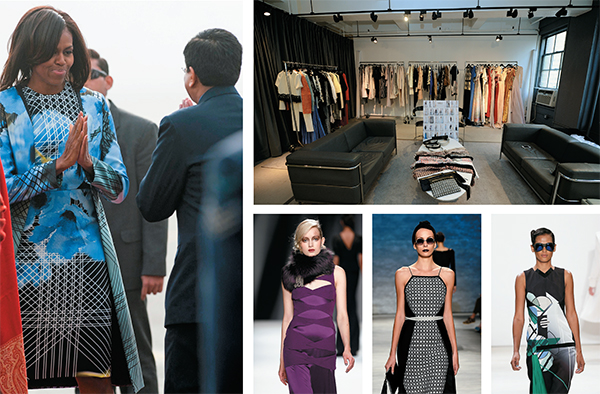 (Clockwise from left): Michelle Obama wears a Bibhu Mohapatra dress during her visit to India in January 2015; his atelier in New York City; models wearing the designer’s creations


Today, Flotus [First Lady of the United States] wears his dresses often enough for him to know her measurements off the cuff. His first meeting with her remains indelibly inked in his memory. After being introduced by a highly decorated marine, he stepped up to greet her. Instead of shaking his hand, she took both his hands in her own and thanked him for making her look beautiful. He blurted out, “Thank you for making my dreams come true.” As Bibhu recounts this story at Trishna, Mumbai’s famous seafood eatery, over endless plates of prawn koliwada and Bombay duck, he suddenly squeals. Sitting diagonally across us is Sunil Gavaskar. His real hero, evidently. He starts to tremble and giggle nervously and only after we took the customary selfies with the cricketing legend did he calm down. Memories of the White House were eclipsed by the legendary batsman.

Walking into Bibhu’s atelier in New York’s Garment District was a special moment from my NYC trip last year. Post his graduation in economics from Utah in 1996, he came to FIT (Fashion Institute of Technology) to study. In between classes, he would pound the pavements of this street, dropping off his resume “like a courier boy dropping off menus for a Chinese restaurant”. Today, he belongs here.

His 11th floor atelier has the most beautiful light streaming through huge windows. Customers sit in the midst of his latest collection—beautiful floor-length gowns, sharply cut trousers, slim fit trenches—on a comfortable, well-worn sofa upholstered in grey leather. Everything—including his office—is warm and welcoming, albeit simple and sparse. I am struck by the absence of clutter. And this is reiterated in his clothes, his life, his sensibility. This New York state of mind that moves forward so fast has no time to gather dust. Very much like the story of Bibhu, the man and the label.