Over 50,000 workers will take part in a three-day national strike to protest over pay in the midst of soaring inflation 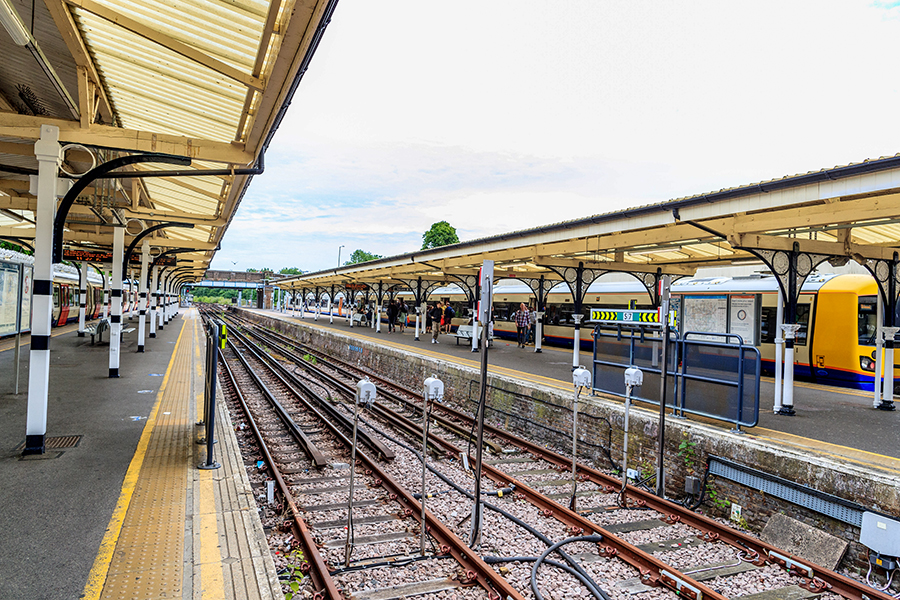 A general overview shows Richmond railway station in West London on Sunday, June 19, 2022, as Britain braces for the biggest railway strikes in decades. Talks have failed to resolve a bitter row over pay, jobs and conditions - and next week's rail strikes are set to be the biggest in decades. Image: Vudi Xhymshiti/Anadolu Agency via Getty Images

London, UK: Britain's railway network this week faces its biggest strike action in more than three decades in a row over pay as soaring inflation erodes earnings.
Rail union the RMT has said that more than 50,000 workers will take part in a three-day national strike, coinciding with major events including the Glastonbury music festival.
Schools are warning that thousands of teenagers taking national exams will also be affected.
The RMT argues that the strikes are necessary as wages have failed to keep pace with inflation, which has hit a 40-year high.
Jobs are also at risk with passenger traffic yet to fully recover after the lifting of coronavirus pandemic lockdowns.

Countries around the world are being hit by decades-high inflation as the Ukraine war and the easing of Covid restrictions fuel energy and food price hikes.
Read more: Of superheroes and the threat of a global recession
The strikes are planned for Tuesday, Thursday and Saturday in the biggest dispute on Britain's railway network since 1989, according to the RMT.
The union has also announced a 24-hour walkout of its members on the Tube, London's underground railway network, planned for Tuesday.
Rail operators, however, warn of disruption throughout the week—with lines not affected by strike action nevertheless reducing services.
"Talks have not progressed as far as I had hoped and so we must prepare for a needless national rail strike and the damaging impact it will have," said Andrew Haines, chief executive of Network Rail, which looks after the country's rail tracks.
"We, and our train operating colleagues, are gearing up to run the best service we can for passengers and freight users next week despite the actions of the RMT."
The strikes will likely compound travel chaos in the aviation sector, after airlines were forced to cut flights due to staff shortages, causing long delays and frustration for passengers.
Thousands of workers were sacked in the aviation industry during the pandemic but the sector is now struggling to recruit workers as travel demand rebounds following the lifting of lockdowns.

The government and the RMT were engaged in a war of words over the weekend, after the union's general-secretary Mick Lynch said strikes would go ahead as "no viable settlements" had been found to the disputes.
But Transport Secretary Grant Shapps accused union bosses of refusing to meet for further talks on Saturday and instead attending a protest march against the rising cost of living.
Shapps said the disruption would cause "misery" and force hospital patients to cancel appointments and pupils sitting exams would face extra pressures of having to change their travel plans.
"By carrying out this action, the RMT is punishing millions of innocent people, instead of calmly discussing the sensible and necessary reforms we need to make in order to protect our rail network," he added.
Modernising the rail network was necessary, as travel use changes, including after the pandemic, he said.
But Lynch accused Shapps of fabrication, insisting talks with train operating companies had broken up without agreement on Thursday night, and no further negotiations had been scheduled.
Contrary to government claims, no pay offer had been made and the union had received no response to its push for a pay increase of 7.1 percent in December, in line with inflation at the time, he said.
"If there's not a settlement, we will continue our campaign," he told Sky News on Sunday, predicting more strikes as other transport unions balloted their members.
The RMT was not looking for special treatment but a deal was needed as members had not had a pay rise for several years, he added.
"If we don't play our hand, thousands of our members will lose their jobs" and safety on the network would be compromised, he said.
The government was being "just as ruthless as P&O but they haven't got agency workers to step in", he added, referring to the mass sacking of staff at the ferry operator earlier this year.
By Ben PERRY
© Agence France-Presse

Tweets by @forbesindia
Can edtech replace classroom teaching?
If they're not ready to change gears, specialized companies may be left in the dust