China population to begin shrinking by 2025

The world's most-populous country has been grappling with a looming demographic crisis as it faces a rapidly ageing workforce, slowing economy and its weakest population growth in decades 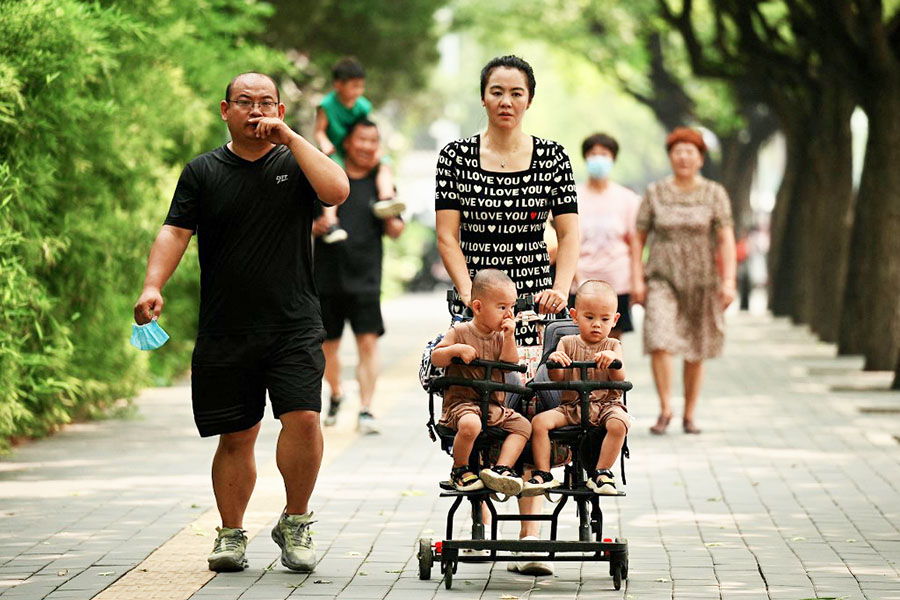 A woman pushes a trolley with twins along a street in Beijing on August 2, 2022. China's population will begin to shrink by 2025, officials said, as family sizes grow smaller and citizens age. Image: Noel Celis / AFP

Beijing, China: China's population will begin to shrink by 2025, officials have said, as family sizes grow smaller and citizens age.
The world's most-populous country has been grappling with a looming demographic crisis as it faces a rapidly ageing workforce, slowing economy and its weakest population growth in decades.
And although officials relaxed the nation's strict "one-child policy" in 2016 and last year allowed couples to have three children, the birth rate has plunged to a record low.

"The growth rate of the total population has slowed down significantly, and it will enter a stage of negative growth in the '14th Five-Year Plan' period," the National Health Commission said Monday, referring to the period between 2021 and 2025.
In January, authorities said that forecasts expected the population to enter zero growth "or even negative growth" in that five-year span.
"Presently, our country's policy system for childbirth support is not perfect, and there is a big gap with population development and the people's expectations," the NHC said in its latest report.
The total fertility rate has dropped below 1.3 in recent years, it added, while the country is expected to enter a stage of severe ageing around 2035, with more than 30 percent of the population older than 60.
Families are also becoming smaller, "weakening" the functions of pension and childcare, the health commission said, calling for improving child-raising support and for policies on housing, education and taxation to help reduce burdens on families.
Authorities in some parts of China are already introducing family-friendly policies in a bid to combat the slowing birth rate.
The eastern city of Hangzhou announced Monday that families with three children would be able to borrow 20 percent more than the maximum limit when applying for housing provident fund loans for the first time.
Other cities like Nanchang and Changsha have also rolled out supportive policies, according to state media.
Higher costs of living and a cultural shift as people grow used to smaller families have been cited as reasons behind the lower number of babies.
The "one-child policy" was introduced by top leader Deng Xiaoping in 1980 to curb population growth and promote economic development, with some exceptions made for rural families and ethnic minorities.
The global population is expected to hit eight billion in November 2022, according to UN projections, with India on course to surpass China as the world's most-populous country in 2023.
© Agence France-Presse