China's ruling Communist Party has taken steps to address the birthrate decline, by relaxing its notorious "one child" policy, first allowing two children in 2016 and as many as three since last year 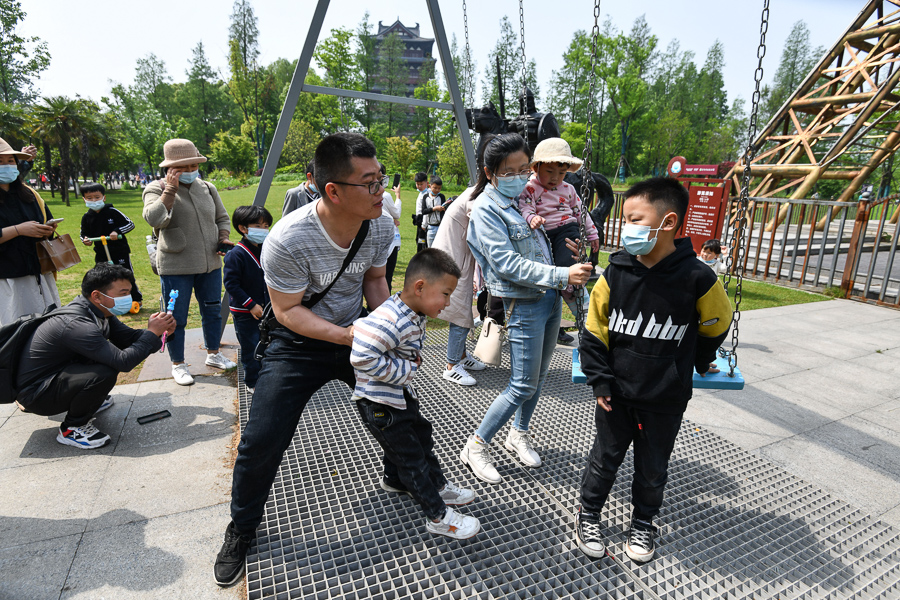 Families at the Fuyang ecological park, China. The "cliff like" decline of China's birth rate has once again become a social concern.
Image: Sheldon Cooper/SOPA Images/LightRocket via Getty Images

As China announced on Monday that its birthrate plummeted for a fifth straight year in 2021, the world’s most populous country moved closer to the potentially seismic moment when its population will begin to shrink, hastening a looming demographic crisis that could undermine its economic vitality and even its political stability.

The falling birthrate, coupled with the increased life expectancy that has accompanied China’s economic transformation over the past four decades, means the number of people of working age, relative to the growing number of people too old to work, has continued to decline. That could result in labor shortages, which could hamper economic growth, and reduce the tax revenue needed to support an aging society.

The situation is creating a huge political problem for Beijing, which is already facing economic headwinds. Along with the demographic data, the country reported on Monday that growth in the last quarter of the year slowed to 4%.

China’s ruling Communist Party has taken steps to address the birthrate decline, by relaxing its notorious “one child” policy, first allowing two children in 2016 and as many as three since last year. It is also offering incentives to young families and promising improvement in workplace rules and early education.

None have been able to reverse a stark fact: An increasing number of Chinese women don’t want children.

“China is facing a demographic crisis that is beyond the imagination of the Chinese authorities and the international community,” said Yi Fuxian, a professor at the University of Wisconsin-Madison, who has long argued that China’s Communist Party leaders were underreporting population figures.

The number of births fell to 10.6 million in 2021, compared with 12 million the year before, according to figures reported on Monday by the National Bureau of Statistics. That was fewer even than the number in 1961, when the Great Leap Forward, Mao Zedong’s economic policy, resulted in widespread famine and death.

For the first time since the Great Leap Forward, China’s population could soon begin to contract. The number of people who died in 2021 — 10.1 million — approached the number of those born, according to the figures announced Monday. Some demographers say the peak may already have occurred.

“The year 2021 will go down in Chinese history as the year that China last saw population growth in its long history,” said Wang Feng, a professor of sociology at the University of California, Irvine, adding that the 2021 birthrate was lower than the most pessimistic estimates.

Other wealthy societies are experiencing a similar decline, although most experts agree that China’s situation has been complicated by the unintended legacy of the government’s “one child” policy, which from 1980 to 2015 zealously policed women’s reproductive choices.

While the goal of that policy was to slow the birthrate to promote economic growth, one effect was that there are now fewer women reaching childbearing age. The government eased the restrictions on family planning just as social and economic conditions improved for women, who began postponing marriage and motherhood. Many do not want any children at all.

“I don’t really want to spend my savings on kids,” said Wang Mingkun, 28, who lives in Beijing and teaches Korean language. “I actually don’t hate kids,” she went on. “I actually like them, but I don’t want to raise any.”

Because the “one child” rule was a pillar of Communist Party policy for decades, questions about its consequences have become politically fraught. When a prominent economist wrote last week that the way to solve China’s declining birthrate was to print trillions of bank notes, he was promptly censored online.

Ren Zeping, the economist, wrote in a research paper he posted on social media that if Beijing set aside the equivalent of $313 billion to help pay for incentives such as cash rewards, tax breaks for couples and more government child-care facilities, it would fix the problem. “China will have 50 million more babies in 10 years,” he explained in a research paper he posted on his social media account.

When his suggestion provoked a fierce debate online, his social media account on Weibo was suspended for “violation of relevant laws.”

Xi Jinping, China’s leader, has proposed similar measures in the past, although not at that scale, choosing instead to move more incrementally to avoid highlighting the failures of previous policies.

The National Bureau of Statistics announced the demographic figures on Monday as part of its report on the country’s economic growth. While overall economic output for the year increased 8.1% in 2021, much of that growth came in the first half of the year.

Ning Jizhe, the bureau’s director, said a low birthrate had become commonplace in many countries, citing Japan and South Korea. In 2021, he noted, the number of women between 21 and 35 — that is, those born at the height of the “one child” era — had decreased by roughly 3 million.

While he said that the pandemic delayed marriage and births “to a certain extent,” he also noted the increased costs of raising children and other social factors.

He nevertheless expressed hope that China’s population would hold steady in the future, citing the government’s decision last year to allow families to have up to three children. “The effect of the ‘three child’ policy will gradually emerge,” he said.

He Yafu, an independent demographer in the southern city of Zhanjiang, disputed that.

“Basically, in a country with a large population like China, if the difference between the number of births and the number of deaths is only a few hundred thousand, it basically belongs in the range of zero growth,” he said in a telephone interview.

The trend, he warned, “cannot be reversed.”

Tweets by @forbesindia
Photo Of The Day: EV DTC
Storyboard 18 - Brands like to endorse athletes who they get to see often on TV: Mithali Raj