The November 6-18 meeting in the resort town of Sharm el-Sheikh will also be dominated by the growing need of virtually blameless poor nations for money to cope not just with future impacts, but those already claiming lives and devastating economies 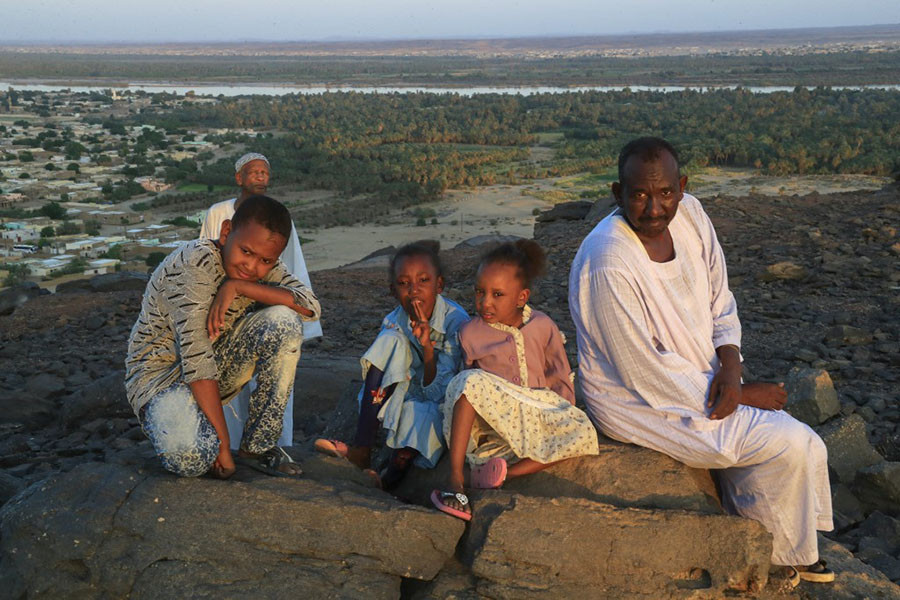 A family poses for a picture on a rock overlooking the Nile River and Karima city in Sudan's Northern State, on October 29, 2022. Climate change, pollution and exploitation by man is putting existential unsustainable pressure on the world's second longest river on which millions of Africans depend. Image: ASHRAF SHAZLY / AFP

Leaders of a divided world meet in Egypt on Monday tasked with taming the terrifying juggernaut of global warming as they face gale-force geopolitical crosswinds, including the war in Ukraine and economic turmoil.
Expectations are high from a world justifiably anxious about its climate-addled future as deadly floods, heat waves and storms across the planet track worst-case climate scenarios.
The November 6-18 meeting in the resort town of Sharm el-Sheikh will also be dominated by the growing need of virtually blameless poor nations for money to cope not just with future impacts, but those already claiming lives and devastating economies.

UN chief Antonio Guterres said Thursday it was time for a "historic pact" between developed and emerging countries, with richer nations providing financial and technical assistance to help poorer ones speed up their renewable energy transitions.
"If that pact doesn't take place, we will be doomed, because we need to reduce emissions, both in the developed countries and emerging economies," Guterres told reporters.
Last week the UN warned that "there is no credible pathway in place" for capping the rise in global temperatures under the Paris Agreement target of 1.5 degrees Celsius.
Also read: Nile is in mortal danger, from its source to the sea
While worst-case projections are less dire than a decade ago, current policies would still see Earth's surface warm a catastrophic 2.8C, and no less than 2.4C even if countries meet all their carbon-cutting pledges under the Paris treaty.
"There have been fraught moments before," said E3G think tank senior analyst Alden Meyer, recalling other wars, the near collapse of the UN-led process in 2009, and Donald Trump yanking the United States out of the Paris Agreement in 2016.
Also read: Methane might be bigger climate problem than thought, study finds
"But this is a perfect storm. It has even given rise to a new term: polycrisis," said the 30-year climate issue veteran.
Casting an even longer shadow on negotiations in Egypt than Russia's invasion of Ukraine, many experts say, is the further erosion of Sino-US relations, which in the past have anchored breakthroughs in climate diplomacy.

At last year's COP26 in Glasgow, the world's two biggest economies conspicuously carved out a safe space for climate, issuing a joint statement.
But a Taiwan visit in August by US congressional leader Nancy Pelosi prompted Beijing to shut down bilateral climate channels. Sweeping restrictions imposed last month by the Biden administration on the sale of high-level chip technology to China deepened the rift.
"We are at a watershed moment," said Li Shuo, a Beijing-based policy analyst with Greenpeace International.
"If the politics are so bad that the world's two biggest emitters won't talk to each other, we're not going to get to 1.5C."
US President Joe Biden and Chinese leader Xi Jinping are set to attend the G20 summit in Bali days before the talks in Egypt close. Should the two leaders meet, "that dynamic would play back to Sharm el-Sheikh", said Li.
Biden will arrive in Egypt touting the landmark Inflation Reduction Act (IRA), which earmarks nearly $400 billion—potentially twice that amount—to speed the greening of the US economy.
But legislative elections the day after the UN climate talks open could dampen US bragging rights if Republicans hostile to international climate action take either or both houses of Congress.
US inflation and a strong dollar, meanwhile, have heaped pain on debt-ridden poor and emerging economies.
A bright spot at COP27 will be the arrival of incoming Brazilian president Luiz Inacio Lula da Silva, who has vowed to aim for zero deforestation in the Amazon, reversing the extractive policies of Jair Bolsonaro, who will step down on January 1.

COP27 will arguably boil down to a trio of interlocking priorities: emissions, accountability and money.
The make-or-break issue is likely to be the creation of a separate pool of capital for "loss and damage"—UN climate lingo for unavoidable and irreversible climate damages.
The United States and the European Union—fearful of creating an open-ended reparations framework—have dragged their feet on this issue for years and question the need for a separate financial channel.
But patience has run thin.
Also read: Yellowstone, Kilimanjaro glaciers among those set to vanish by 2050: UNESCO
"The success or failure of COP27 will be judged on the basis of whether there is agreement on a financing facility for loss and damage," said Munir Akram, Pakistan's UN ambassador and chair of the powerful G77+China negotiating block of more than 130 developing nations.
"Where there's a will, there's a way," Akram told AFP in an interview.
Rich nations will also be expected to set a timetable for the delivery of $100 billion per year to help developing countries green their economies and build resilience against future climate change.
The promise is already two years past due and remains $17 billion shy, according to the OECD.
Last year's COP26 in Glasgow prioritised reducing carbon pollution, mostly through sideline agreements orchestrated by host Britain to curb methane emissions, halt deforestation, phase out fossil fuel subsidies and ramp up the transition to renewable energy.
Nations agreed to review their carbon-cutting pledges annually and not just every five years, though only a handful of nations have done so in 2022.
Guterres, meanwhile, will unveil a critical assessment of "net-zero" commitments by companies, investors and local governments to become carbon neutral.
By Marlowe Hood with Amelie Bottollier-Depois at the United Nations
© Agence France-Presse​