Not only is the energy sector a major source of the carbon emissions that drive climate change, it is also increasingly vulnerable to the shifts that come with a heating planet, the UN's World Meteorological Organization stressed 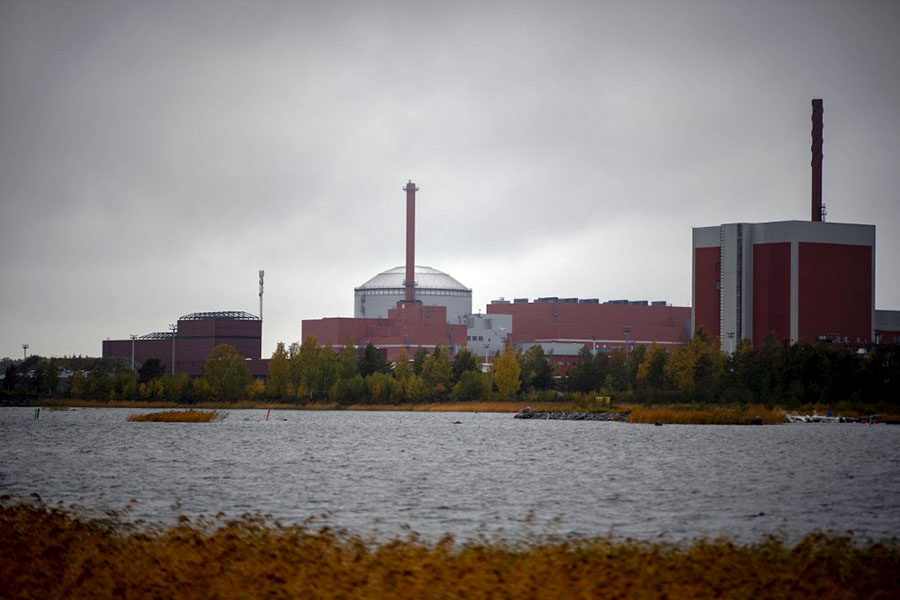 The OL3, the third, newest and fully operational reactor of the nuclear power plant Olkiluoto is seen on October 5, 2022, on the island of Eurajoki, western Finland. A third of power plants running on fossil fuels are in areas of high water stress, as are 15 percent of existing nuclear power plants—a share expected to swell to 25 percent in the next 20 years. Image: Olivier MORIN / AFP

Climate change risks undermining global energy security unless the use of renewables is dramatically scaled up, the UN warned Tuesday, suggesting the Ukraine conflict's ripple effects could speed up the green transition.
Not only is the energy sector a major source of the carbon emissions that drive climate change, it is also increasingly vulnerable to the shifts that come with a heating planet, the UN's World Meteorological Organization stressed.
In its State of Climate Services annual report, the WMO warned that increasingly intense extreme weather events, droughts, floods and sea-level rise—all linked to climate change —were already making energy supply less reliable.

It pointed, for instance, to a historic heatwave that sparked massive power outages in Buenos Aires in January, while experts mentioned recently disrupted electricity production amid heatwaves and shrinking reservoirs in Europe and China.
WMO Secretary-General Petteri Taalas warned that "in the future these kinds of events will become more and more frequent", pointing out that much of the world's energy infrastructure is today in areas vulnerable to climate change.
In 2020, a massive 87 percent of global electricity generated by thermal, nuclear and hydroelectric power plants directly depended on having freshwater for cooling, the WMO said.

'Changing before our eyes'

But a third of power plants running on fossil fuels are in areas of high water stress, as are 15 percent of existing nuclear power plants—a share expected to swell to 25 percent in the next 20 years.
Eleven percent of hydroelectric dams are also located in highly water-stressed areas, while more than a quarter of hydropower plants are in river basins struggling with water scarcity, the WMO said.
"Time is not on our side and our climate is changing before our eyes," Taalas said.
"We need a complete transformation of the global energy system."
Also read: Challenges of realising a global carbon price
Taalas pointed out that the energy sector is itself a part of the problem since it is the source of around three quarters of global greenhouse gas emissions that are changing the climate.
"Switching to clean forms of energy generation... and improving energy efficiency is vital," he said.
But he cautioned that reaching net-zero emissions by 2050 would only be possible "if we double the supply of low-emissions electricity within the next eight years".

The report, which WMO drafts with input from more than two dozen organisations, said shifting to renewable energy would help alleviate growing global water stress, pointing out that the amount of water used by solar and wind is much lower than for traditional power plants.
The energy security crisis caused by the war in Ukraine and disrupted access to Russian gas has sparked fears that countries will fall back on dirty fuel sources like coal.
Also read: Methane might be bigger climate problem than thought, study finds
Taalas acknowledged this could be the case in the short term, but said the war was demonstrating the dangers of dependence on unreliable energy sources, and would surely speed up the green transition.
"From a climate perspective, the war in Ukraine may be seen as a blessing," he said.

WMO warned that the current pledges by countries to cut carbon emissions "fall well short" of what is needed to meet the objectives set by the 2015 Paris Agreement on climate change.
The report said global investments in renewable energy "need to triple by 2050 to put the world on a net-zero trajectory".
It called in particular for more clean energy investments in Africa.
The continent, which is already facing massive droughts and other severe effects from climate change, has seen only two percent of clean energy investment in the past two decades.
And yet with 60 percent of the best solar resources on the planet, it has the potential to become a major player in solar energy production, the report said.
However, significant investments are required.
"Bringing access to modern energy for all Africans calls for an investment of $25 billion annually," the report said.
That is the equivalent of around one percent of global energy investment today.
By Nina LARSON
© Agence France-Presse​