The rise in the developing world's poverty rates over the past three months "is drastically faster than the shock of the COVID-19 pandemic," UNDP said, blaming the price surges in part on the war in Ukraine 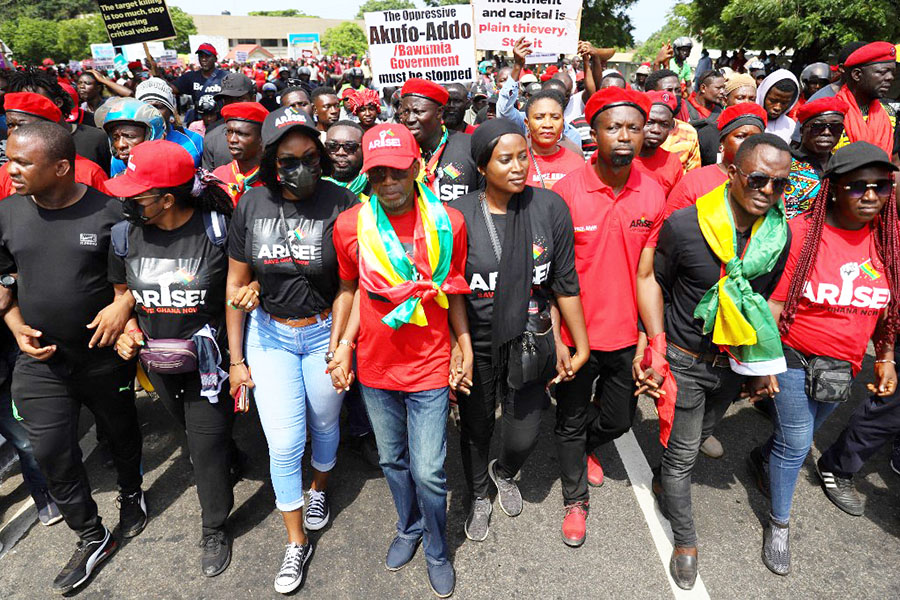 Protesters take part in a march on the second day of a demonstration over soaring living costs in Accra, Ghana, on June 29, 2022. The West African nation, reeling from a pandemic-spurred economic slump and hammered by the impact of Russia's war in Ukraine, has seen inflation surge to more than 27 percent this month -- the highest level in almost two decades.
Image: Nipah Dennis / AFP​

United Nations, United States: Soaring global food and energy prices have forced 71 million people into poverty in the world's poorest countries, according to a United Nations Development Program report published Thursday.The rise in the developing world's poverty rates over the past three months "is drastically faster than the shock of the COVID-19 pandemic," said the UNDP in a press release, blaming the price surges in part on the war in Ukraine.
To address the growing issue, the UNDP said "targeted cash transfers to households are more equitable and more cost-effective than blanket energy subsidies," but the UN agency added that governments will "need support from the multilateral system to make ends meet."

The UNDP also warned in its report that as central banks raise interest rates to tackle inflation, "there is a risk of triggering further recession-induced poverty that will exacerbate the crisis even more, accelerating and deepening poverty worldwide."
The report examined 159 countries, and found the situation to be most critical in the Balkans, the Caspian Sea region and sub-Saharan Africa, particularly in the Sahel.
"Unprecedented price surges mean that for many people across the world, the food that they could afford yesterday is no longer attainable today," said UNDP head Achim Steiner.
Also read: 40 million more faced acute hunger in 2021: UN
"This cost-of-living crisis is tipping millions of people into poverty and even starvation at breathtaking speed and with that, the threat of increased social unrest grows by the day," he warned.
Among the countries facing the most severe consequences of surging prices, according to the report, are Armenia, Uzbekistan, Burkina Faso, Ghana, Kenya, Rwanda, Sudan, Haiti, Pakistan, Sri Lanka, Ethiopia, Mali, Nigeria, Sierra Leone, Tanzania and Yemen.
© Agence France-Presse