The fury and fear over energy prices that have exploded in Ecuador are playing out the world over, across the United States to Nigeria 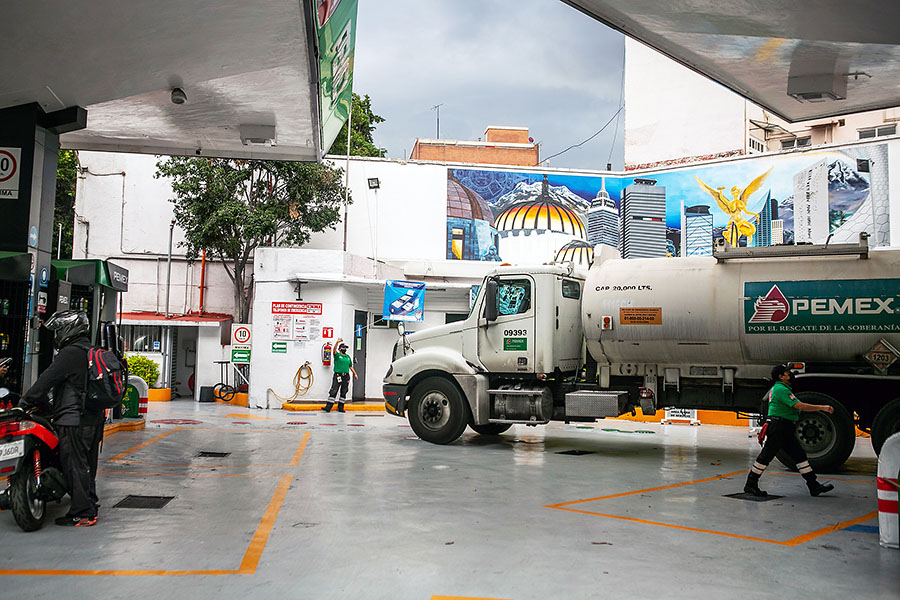 A gasoline tanker truck unloads at a service station in Mexico City on June 27, 2022. Mexico is using money it makes from the crude oil it produces to subsidize gas prices. (Celia Talbot Tobin/The New York Times)


LONDON — “No es suficiente” — It’s not enough. That was the message protest leaders in Ecuador delivered to the country’s president this past week after he said he would lower the price of both regular gas and diesel by 10 cents in response to riotous demonstrations over soaring fuel and food prices.

The fury and fear over energy prices that have exploded in Ecuador are playing out the world over. In the United States, average gasoline prices, which have jumped to $5 per gallon, are burdening consumers and forcing an excruciating political calculus on President Joe Biden before the midterm congressional elections this fall.

But in many places, the leap in fuel costs has been much more dramatic, and the ensuing misery much more acute.

Families worry how to keep the lights on, fill the car’s gas tank, heat their homes and cook their food. Businesses grapple with rising transit and operating costs and with demands for wage increases from their workers.

In Nigeria, stylists use the light of their cellphones to cut hair because they can’t find affordable fuel for the gasoline-powered generator. In Britain, it costs $125 to fill the tank of an average family-size car. Hungary is prohibiting motorists from buying more than 50 liters of gas a day at most service stations. On Tuesday, police in Ghana fired tear gas and rubber bullets at demonstrators protesting against the economic hardship caused by gas price increases, inflation and a new tax on electronic payments.

The staggering increase in the price of fuel has the potential to rewire economic, political and social relations around the world. High energy costs have a cascading effect, feeding inflation, compelling central banks to raise interest rates, crimping economic growth and hampering efforts to combat ruinous climate change.

The invasion of Ukraine by Russia, the largest exporter of oil and gas to global markets, and the retaliatory sanctions that followed have caused gas and oil prices to gallop with an astounding ferocity. The unfolding calamity comes on top of two years of upheaval caused by the COVID-19 pandemic, off-and-on shutdowns and supply chain snarls.

The spike in energy prices was a major reason the World Bank revised its economic forecast last month, estimating that global growth will slow even more than expected, to 2.9% this year, roughly half of what it was in 2021. The bank’s president, David Malpass, warned that “for many countries, recession will be hard to avoid.”

In Europe, an overdependence on Russian oil and natural gas has made the continent particularly vulnerable to high prices and shortages. In recent weeks, Russia has been ratcheting down gas deliveries to several European countries.

Across the continent, countries are preparing blueprints for emergency rationing that involve caps on sales, reduced speed limits and lowered thermostats.

As is usually the case with crises, the poorest and most vulnerable will feel the harshest effects. The International Energy Agency warned last month that higher energy prices have meant an additional 90 million people in Asia and Africa do not have access to electricity.

Expensive energy radiates pain, contributing to high food prices, lowering standards of living and exposing millions to hunger. Steeper transportation costs increase the price of every item that is trucked, shipped or flown — whether it’s a shoe, cellphone, soccer ball or prescription drug.

“The simultaneous rise in energy and food prices is a double punch in the gut for the poor in practically every country,” said Eswar Prasad, an economist at Cornell University, “and could have devastating consequences in some corners of the world if it persists for an extended period.”

In many places, livelihoods are already being upended.

Dione Dayola, 49, leads a consortium of about 100 drivers who cruise metropolitan Manila, Philippines, picking up passengers in the minibuses known as jeepneys. Now, only 32 of those drivers are on the road. The rest have left to search for other jobs or have turned to begging.

Persistently expensive energy is stirring up political discontent not only in places where the war in Ukraine feels remote or irrelevant but also in countries that are leading the opposition to Russia’s invasion.

Last month, Biden proposed suspending the tiny federal gas tax to reduce the sting of $5-a-gallon gas. And Biden and other leaders of the Group of 7 this past week discussed a price cap on exported Russian oil, a move that is intended to ease the burden of painful inflation on consumers and reduce the export revenue that Russian President Vladimir Putin is using to wage war.

Leaders of three French energy companies have called for an “immediate, collective and massive” effort to reduce the country’s energy consumption, saying that the combination of shortages and spiking prices could threaten “social cohesion” next winter.

In poorer countries, the threat is more fraught as governments are torn between offering additional public assistance, which requires taking on burdensome debt, and facing serious unrest.

In Ecuador, government gas subsidies were instituted in the 1970s, and every time officials have tried to repeal them there has been a violent backlash.

The government spends roughly $3 billion a year to freeze the price of regular gas at $2.55 and the price of diesel at $1.90 per gallon.

On June 26, President Guillermo Lasso proposed shaving 10 cents off each of those prices, but the powerful Ecuadorean Confederation of Indigenous Nationalities, which has led two weeks of protests, rejected the plan and demanded reductions of 40 and 45 cents. On Thursday, the government agreed to cut each price by 15 cents, and the protests subsided.

Mexico’s president, Andrés Manuel López Obrador, is using money the country makes from the crude oil it produces to help subsidize domestic gas prices. But analysts warn that the revenue the government earns from oil can’t make up for the money it is losing by temporarily scrapping taxes on gas and by providing an additional subsidy to companies that operate gas stations.

There is little relief in sight. “We will still see high and volatile energy prices in the years to come,” said Fatih Birol, executive director of the International Energy Agency.

At this point, the only scenario in which fuel prices go down, Birol said, is a worldwide recession.