From Rihanna and Margot Robbie to Harry Styles: 10 celebrities who disrupted the codes of fashion in 2022

The New York Times has just unveiled the 93 personalities it considers to be the most stylish of 2022. From Rihanna to Margot Robbie, here's a look at 10 stars who changed the fashion game in the year 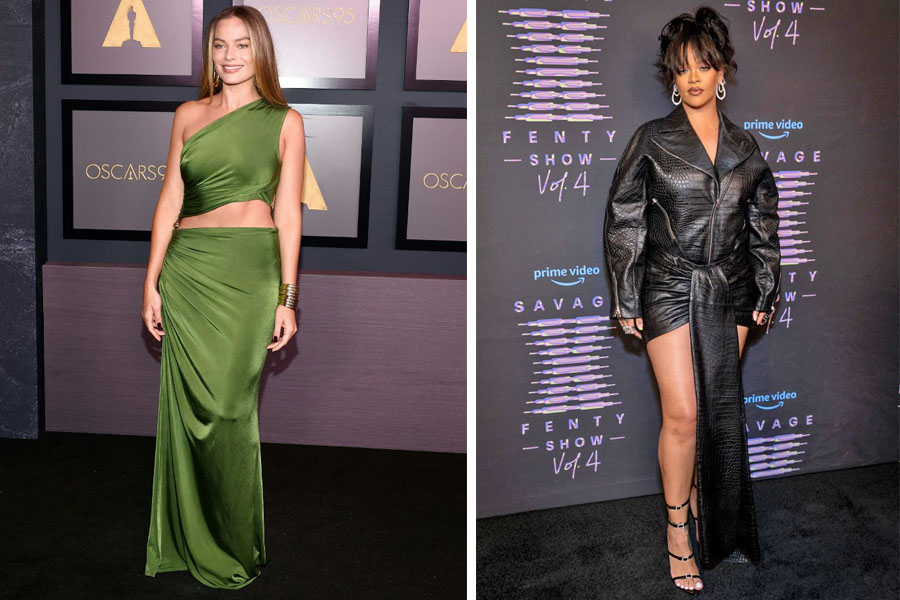 The New York Times has just unveiled the 93 personalities it considers to be the most stylish of 2022. It is a (very) long list based on elegance, fashion and influence, but not only... Some celebrities have genuinely shaken up the codes of fashion, shattering all kinds of conventions and preconceptions in the process. From Rihanna to Margot Robbie, here's a look at 10 stars who changed the fashion game in 2022.

Although more discreet of late, Rihanna has been the subject of much attention since the announcement of her pregnancy earlier this year. And for good reason, the 30-year-old  has shunned convention by proudly displaying her baby bump, her pregnancy figure and her stretch marks, with crop tops, see-through clothes and tight dresses, showing the world that she doesn't care what anyone might say. Forget the sanctimonious clichés surrounding pregnant women, as Rihanna has changed the game — and paved the way for other to follow — all while sparking a revolution in the world of maternity clothes.

Hailed as an icon of a generation free from stereotypes at the end of 2021, Harry Styles has never stopped denouncing and smashing the gendered codes of fashion, even launching his own gender-neutral beauty brand, called Pleasing. But he is far from being alone in this quest. Timothée Chalamet too has freed himself of the many norms surrounding masculinity, embracing non-binary fashion with style. See, for example, his backless suit at the Venice Film Festival, which set social networks ablaze. Lil Nas X, David Banda and Billy Porter could also be added to this list of celebrities helping to break down some of these constraints.

Margot Robbie doesn't feature in the New York Times list, which preferred to include Ryan Gosling for his role as Ken in the upcoming "Barbie" movie. However, it is the Australian actress — taking on the role of the most famous doll on the planet — who is ultimately at the origin of "Barbiecore," one of the key trends of the year, bringing an unexpected wave of pink to fashion and many other sectors. There's no doubt that the star of the movie -- slated for release in summer 2023 -- is one of the celebrities that left a mark on the fashion world in 2022.

While the return of 'normcore' could have clearly set Mark Zuckerberg up as a fashion icon at the end of this year, it was the sight of his avatar sporting a luxury suit by Thom Browne -- among other designer outfits -- that allows the Meta chief to be considered one of the most stylish personalities of the year, even if the metaverse has not (yet) met with the expected level of success. Nevertheless, the entrepreneur can boast of having this year launched a first digital clothing store, the Meta Avatars Store, and of having put a first unexpected foot in the world of fashion.

While some are casting off stereotypes and preconceptions relating to gender or age, Lizzo is on a mission to remind everyone that the body positive movement is not just a passing trend -- it's here to stay, despite some frequent backtracking. Not content with proving it regularly on the red carpet, the American singer and flutist is also at work behind the scenes. In 2022, she launched her own brand of shapewear, called Yitty, channeling body positivism and self-affirmation with creations designed to suit (absolutely) all women.

There's no denying the impact of the hit show "Euphoria," the second season of which aired earlier this year. Madeleine Perez, aka Maddy, played by Alexa Demie, is one of the show's main characters who helped drive the revival of 2000s fashion, with low-rise pants, crop tops, butterfly accessories, chokers and overalls. Kendall Jenner, Hailey Bieber and Bella Hadid then picked up the torch to make this trend one of the most significant of the year.

You could've been mistaken for thinking that the age of star models was coming to an end — but it's not. Not for a handful of them anyway, like Bella Hadid, who shone all year long. But it was during the finale of the spring-summer 2023 runway show from Coperni — a fashion house helmed by designers Sebastien Meyer and Arnaud Vaillant — that the supermodel really stood out. This was due to the pair's spray-on dress, an innovation presented on the body of Bella Hadid. Almost naked, the model was sprayed with a liquid that turned into fabric on contact with her skin. It was a real feat that pushed Gigi Hadid's sister even further into the spotlight. In fact, she has just been named "Model of the Year" by the British Fashion Council.

It's probably not very discreet to say, but Grece Ghanem has just celebrated her 57th birthday. And she has also decided to shatter her share of preconceptions, this time related to age. Invisible, she is certainly not, daring to try all the outfits and make-up that she wants, and proving that age really is just a number. A style icon for all women, she is now followed by nearly a million people on Instagram, and never goes unnoticed on the front row of a fashion show. She didn't make the New York Times list, but she was a key presence in fashion this year, helping to bring women over 50 out of the shadows and into the limelight.

There's no way Queen Elizabeth II could not feature this ranking. The Queen of England, who passed away on September 8, marked 2022 -- as well as the last seven decades -- with her signature style. Her colorful outfits, designed to make her visible in the crowd, her unmistakable hats, her pearls, and her legendary handbag, all made the monarch a long-standing fashion icon. The proof? In June, the outfit worn by the Queen for her last official portrait was the talk of the world -- and the internet -- in a matter of minutes, demonstrating the high level of interest surrounding each of the queen's chosen designs.

Tweets by @forbesindia
Photo of the day: The new normal
Sipping in Singapore: How the bar capital of Asia is enticing serious gourmands