From war to peace: Vietnam's rubber sandals march on 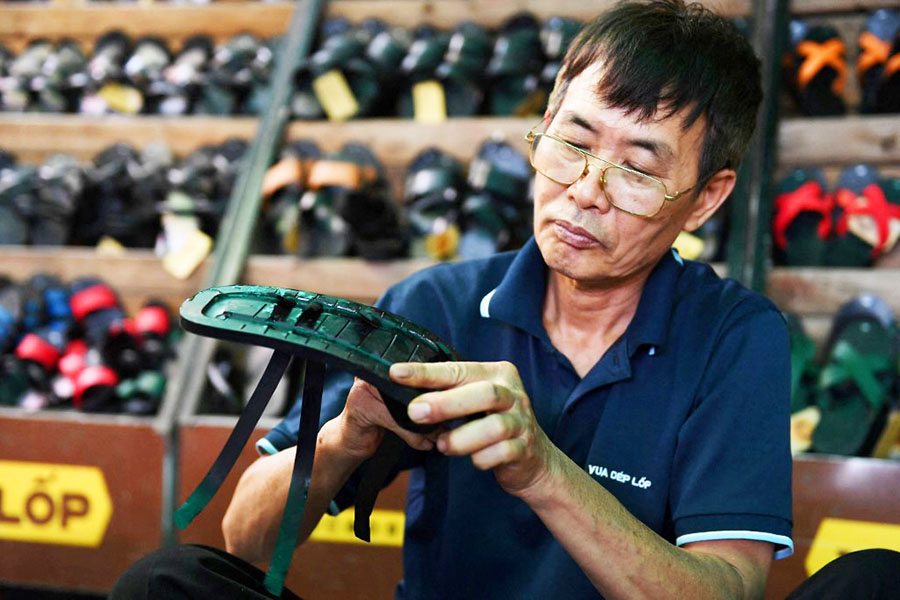 This photo taken on July 5, 2022, shows a worker making rubber sandals at a shop in Hanoi. Made from recycled military truck or aircraft tyres, Vietnam's hand-made rubber sandals, the famously rugged footwear of the Viet Cong, have travelled vast distances over the decades. Image: Nhac Nguyen/AFP

Hanoi, Vietnam: Made from recycled military truck or aircraft tyres, Vietnam's hand-made rubber sandals, the famously rugged footwear of the Viet Cong, have travelled vast distances over the decades.

In the bustling capital Hanoi, all kinds of shoes are on sale: from $1,000 Gucci heels to $2 plastic slippers.
But for those seeking a nod to yesteryear, the hard-soled rubber sandals — evocative of the communist state's resourcefulness under fire — are available at markets and small stores alike.

Dao Van Quang paid $8 for a standard pair at a shop outside a Hanoi museum devoted to the country's revolutionary leader — and dedicated rubber sandal wearer — Ho Chi Minh.
"I wore rubber sandals when I was at school, in the 1980s," the 47-year-old from central Quang Nam province told AFP.
"They are of historical value, easy to wear and look nice."
At the museum, the well-worn pair belonging to the former North Vietnam president known affectionately as "Uncle Ho" are displayed in a glass box with his Chinese-style uniform.
Ho's sandals have even been lauded in national songs praising his simple lifestyle.
"These sandals helped Uncle travel a long way, and with them, he overcame difficulties to build the country," the lyrics of one song say. 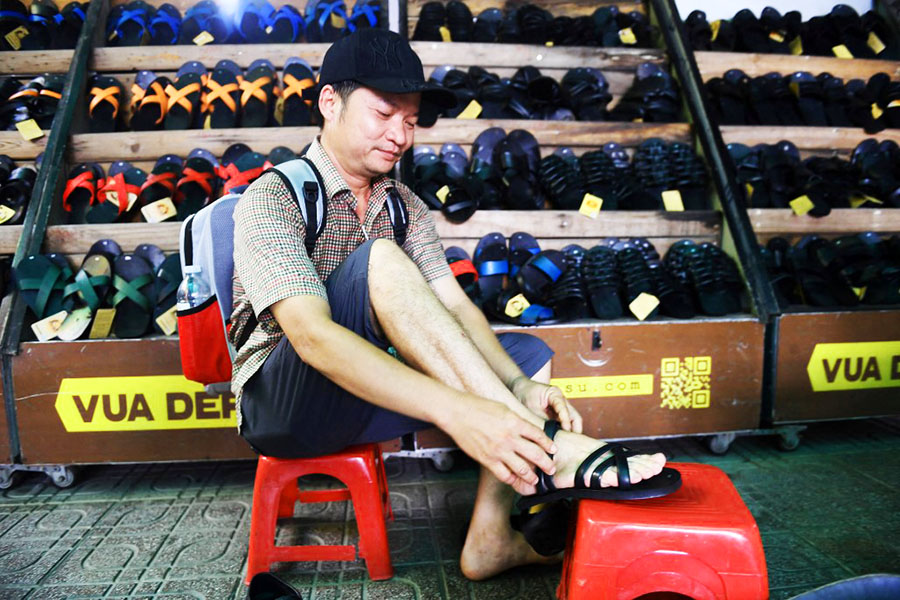 A client trying on rubber sandals at a shop in Hanoi. Image: Nhac Nguyen/ AFP
The Vietnamese first began making rubber sandals in the late 1940s, during the First Indochina War against the French, using tyres from an ambushed army truck.
They found the sandals were cheap to make and survived well in wet, muddy and hilly conditions, as soldiers marched through thick jungle.
Read more: Nike is making sneakers that can be taken apart for recycling
Later, during the Vietnam War, the simple but sturdy footwear became a symbol of the communist Viet Cong forces' ingenuity in their fight against the United States' military might.
Even in peacetime, the design remains popular for sustainability reasons, said Nguyen Duc Truong, who has spent his life crafting the shoes. "I think there is still much potential for rubber sandals," the 58-year-old said.

Vietnam is one of the world's top four countries for shoe manufacturing and its factories produce pairs for major brands such as Nike and Adidas.
The footwear export industry generated nearly $12 billion in the first half of this year, according to government figures.
While the humble rubber sandal does not quite generate the same revenue, it is high on heritage value and its popularity as a casual shoe is rising.
Vua Dep Lop, which started as a small business and became Vietnam's rubber sandal leader, sells the footwear for around $10 a pair.
Read more: Have you checked out the fully 3D-printed and infinitely recyclable sneakers?
At its workshop in Hanoi, shoemakers use sharp knives and chisels to craft the sandals from huge tyres that are almost the same height as the workers.
While the traditional black models are bestsellers, a colourful modern twist is helping the sandal appeal to a younger demographic.
Nguyen Tien Cuong took over the business from his father-in-law in 2011, and has sold more than half a million pairs of rubber sandals since then.
"We tried to make them softer and more fashionable. After changing the style and format, we started having more customers," he said.
by Tran Thi Minh Ha