In the new study, published in Nature Climate Change, glaciologists found that regardless of any future fossil fuel pollution, warming to date will cause the Greenland ice sheet to shed 3.3 percent of its volume, committing 27.4 centimetres to sea level rise 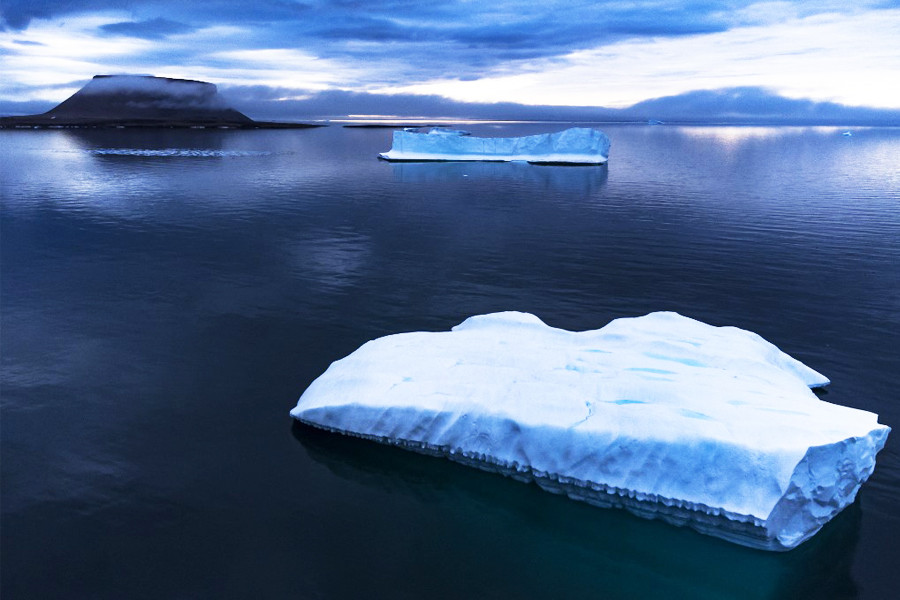 Icebergs float in the Baffin Bay near Pituffik, Greenland on July 20, 2022 as captured during an airborne NASA mission along with Univesity of Texas scientists to measure melting Arctic sea ice. Image: Kerem Y¸cel / AFP

Paris, France: Even without any future global warming, Greenland's melting ice sheet will cause major sea level rise, with potentially "ominous" implications over this century as temperatures continue to rise, according to a study published Monday.
Rising sea levels—pushed up mainly by melting ice sheets on Greenland and Antarctica—
are set to redraw the map over centuries and could eventually swamp land currently home to hundreds of millions of people, depending on humanity's efforts to halt warming.
The Greenland ice sheet is currently the main factor in swelling the Earth's oceans, according to NASA, with the Arctic region heating at a faster rate than the rest of the planet.
In the new study, published in Nature Climate Change, glaciologists found that regardless of any future fossil fuel pollution, warming to date will cause the Greenland ice sheet to shed 3.3 percent of its volume, committing 27.4 centimetres to sea level rise.

While the researchers were not able to give an exact timeframe, they said most of it could happen by 2100—meaning that current modelled projections of sea level rise could be understating the risks this century.
The "shocking" results are also a lowest estimate because they do not take future warming into account, said lead author Jason Box, of the National Geological Survey of Denmark and Greenland.
"It's a conservative lower bound. The climate has only to continue warming around Greenland for more commitment," he told AFP.
If the high levels of melting seen in 2012 became an annual occurrence, the study estimated sea-level rise could be around 78 cm, enough to swamp vast swathes of low-lying coastlines and supercharge floods and storm surges.
Also read: Modern sea level rise may have begun in 1863, study finds
This should serve "as an ominous prognosis for Greenland's trajectory through a 21st century of warming", the authors said.
In a landmark report on climate science last year, the Intergovernmental Panel on Climate Change (IPCC) said the Greenland ice sheet would contribute up to 18cm to sea level rise by 2100 under the highest emissions scenario.
Box, who was an author on that report, said his team's latest research suggests those estimates could be "too low".
Instead of using computer models, Box and colleagues used two decades of measurements and observational data to predict how the Greenland ice sheet will adjust to the warming already experienced.
Upper areas of the ice sheet adds mass through snowfall every year, but since the 1980s the territory has been running an ice "budget deficit", which sees it lose more ice than it gains through surface melting and other processes.

The theory that researchers used was initially developed to explain changes in Alpine glaciers, said Box.
This holds that if more snow piles up on top of a glacier, lower areas to expand. In this case the reduced snow is driving shrinking in lower parts of the glacier as it rebalances, he said.
Box said the methods his team used were "radically different" from computer modelling, but could complement this work.
Gerhard Krinner, another IPCC author specialising in ice sheet climate modelling and who was not involved in the study, said the findings broadly tallied with total levels of sea level rise seen in more complicated models, but questioned the arguments that this would largely happen this century.
"The work really provides an estimate of the committed long-term (multi-century or even multi-millennial) response of the Greenland Ice Sheet, not an estimate of minimum loss over this century," said Krinner, a senior scientist at the French research agency CNRS.
The world has warmed an average of nearly 1.2 degrees Celsius since pre-industrial times, unleashing a catalogue of impacts from heatwaves to more intense storms.
Also read: India can face 92% GDP loss by 2100 due to global warming : IPCC report
Under the Paris climate deal, countries have agreed to limit warming to 2C.
In their report on climate impacts this year, the IPCC said even if warming is stabilised at 2C to 2.5C, "coastlines will continue to reshape over millennia, affecting at least 25 megacities and drowning low-lying areas", which were home to up to 1.3 billion people in 2010.
© Agence France-Presse