These polar bears can survive with less sea ice

The discovery suggests a way that a small number of bears might survive as warming continues and more of the sea ice that they normally depend on disappears; however, grave risk to overall polar bear populations remain 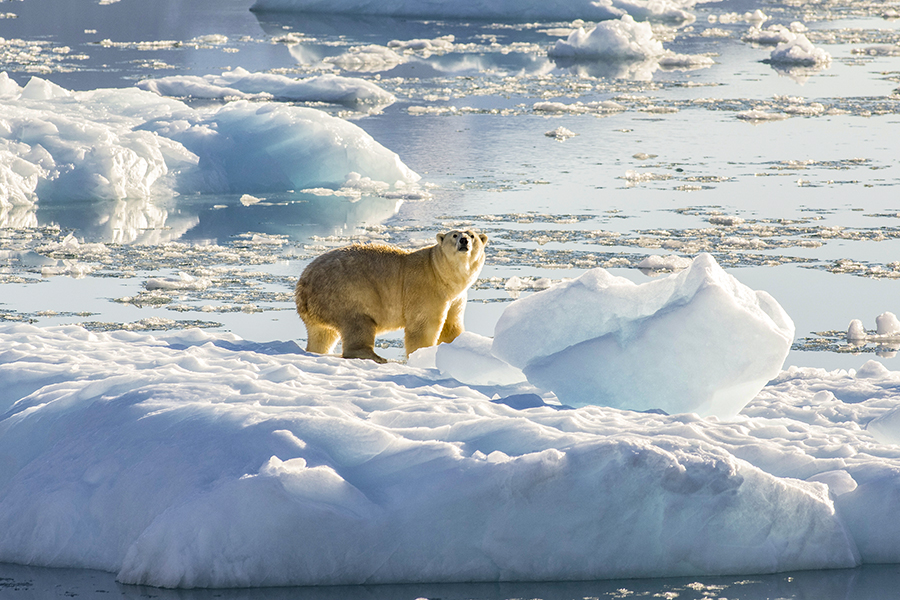 A photo provided by Thomas W. Johansen/NASA shows a polar bear atop a chunk of floating glacial ice in a fjord in Southeastern Greenland in 2016. The overall threat to the animals from climate change remains, but a new finding suggests that small numbers might survive for longer as the Arctic warms. (Thomas W. Johansen/NASA via The New York Times)

Scientists have identified a distinct subpopulation of polar bears in southeastern Greenland that, in an area with little sea ice, survive by hunting from ice that breaks off glaciers.

The discovery suggests a way that a small number of bears might survive as warming continues and more of the sea ice that they normally depend on disappears. But the researchers and other polar experts cautioned that grave risks to the overall polar bear population in the Arctic remain and will only be lessened by cutting greenhouse gas emissions to curb global warming.

The subpopulation, believed to number several hundred animals, was identified during a multiyear study of what was thought to be a single population of bears along Greenland’s entire 1,800-mile-long east coast. Through analysis of satellite-tracked movements, tissue samples and other data, the bears in the southeast were found to be isolated, both physically and genetically, from the others.

“This was a wholly unexpected finding,” said Kristin Laidre, a biologist at the University of Washington who has studied marine mammal ecology in Greenland for two decades. Laidre is the lead author of a paper on the subpopulation published Thursday in the journal Science.

Southeastern Greenland is especially remote, with narrow fjords hemmed in by steep mountains. At the inland end there are often glaciers that terminate in the water; at the other end is open ocean, with a strong south-flowing current. “These bears are very geographically isolated,” Laidre said. “They’ve really kind of evolved to being residents because that’s the only way to live down there.” The researchers estimated that this subpopulation had been isolated for at least several hundred years.

Overall, there are an estimated 26,000 polar bears around the Arctic, in 19 officially designated subpopulations. The animals live on the seasonal sea ice, hunting their primary prey, seals, as the seals bask on the ice or come up for air through breathing holes. But the rapid warming of the Arctic linked to human-caused emissions of greenhouse gases has reduced the extent and duration of sea-ice cover.

Some subpopulations, notably one in the southern Beaufort Sea off Alaska and Canada, are already declining because the ice does not persist long enough for the bears to hunt enough food for themselves and their offspring. Polar bear experts say that if the world continues to warm polar bears could become nearly extinct by the end of the century.

Southeastern Greenland is relatively warm, and the fjords there have less sea-ice cover than many other areas with polar bears — on average, about 100 days a year with enough ice for them to live and hunt on.

“We know that that is just too few for a polar bear to survive,” Laidre said. Those are the kinds of conditions that may become widespread elsewhere in the Arctic later this century.

Laidre and her colleagues found that the Southeastern Greenland bears hunt from sea ice while it is around. But when it’s gone, the bears have other ice to hunt from: the freshwater ice that calves off from the glaciers into the fjords, as icebergs and progressively smaller chunks, and that persists most of the year

The bears hunt from this floating mix of ice, called glacial mélange, in the same way they hunt from the sea ice. “It gives them an extra and uncommon ice platform that bears in many other places don’t have,” Laidre said, allowing them to catch enough seals for them and their offspring to survive and thrive.

But habitats like this are rare, said Twila Moon, a scientist with the National Snow and Ice Data Center in Boulder, Colorado, who analyzed sea-ice and glacial-ice cover in the fjords as part of the research.

“There are limited locations in the Arctic where we see substantial and consistent production of glacial mélange,” Moon said. In addition to some areas in Greenland, the Norwegian archipelago of Svalbard has glaciers that terminate in the water.

Also: Why philanthropy needs to include a climate lens

So while these special conditions may allow some bears to survive as the sea ice continues to shrink, overall the animals will continue to be threatened by climate change.

“We are expecting to see large declines of polar bears across the Arctic under current warming trajectories,” Laidre said. “And this study doesn’t change that.”

Steven Amstrup, chief scientist with conservation group Polar Bears International, who was not involved in the research, said the study was “really thoroughly done” and “points to a very discrete group of bears.”

Whether it constitutes a 20th official subpopulation is up to a group of experts to decide, under the auspices of the International Union for Conservation of Nature.