At a moment when the US refers to Russia as a pariah state that needs to be cut off from the world economy, others, largely in Europe, are warning of the dangers of isolating and humiliating Putin 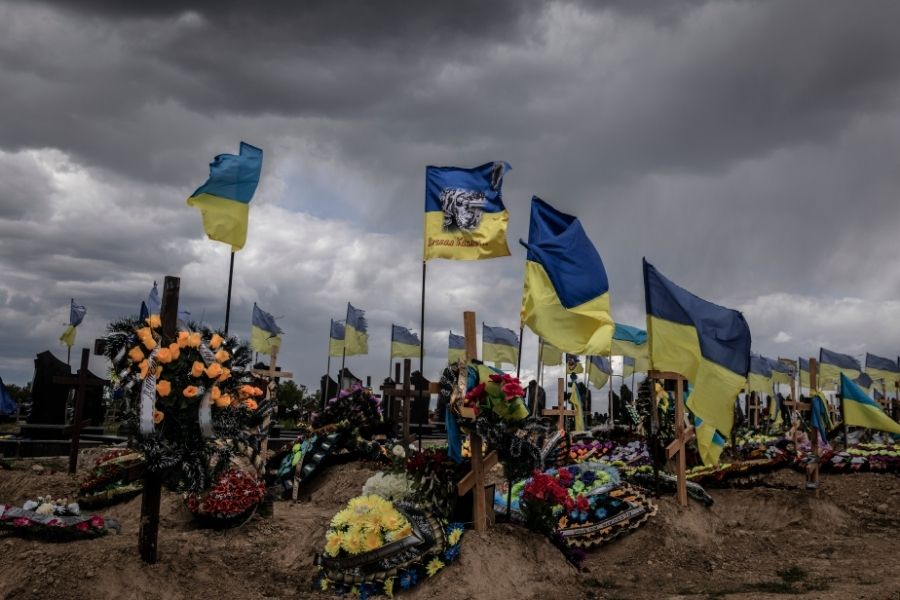 Ukrainian flags fly above graves at the military cemetery in Kharkiv, Ukraine, May 17, 2022. Differing objectives foreshadow a coming debate about what position President Volodymyr Zelenskky of Ukraine and his Western allies would take if negotiations to end the conflict finally get going. Image: Finbarr O'Reilly/The New York Times

WASHINGTON — Three months into Russia’s invasion of Ukraine, America and its allies are quietly debating the inevitable question: How does this end?
In recent days, presidents and prime ministers as well as the Democratic and Republican party leaders in the United States have called for victory in Ukraine. But just beneath the surface are real divisions about what that would look like — and whether “victory” has the same definition in the United States, in Europe and, perhaps most importantly, in Ukraine.
In the past few days alone there has been an Italian proposal for a cease-fire, a vow from Ukraine’s leadership to push Russia back to the borders that existed before the invasion was launched on Feb. 24, and renewed discussion by administration officials about a “strategic defeat” for President Vladimir Putin — one that would assure that he is incapable of mounting a similar attack again.
After three months of remarkable unity in response to the Russian invasion — resulting in a flow of lethal weapons into Ukrainian hands and a broad array of financial sanctions that almost no one expected, least of all Putin — the emerging fissures about what to do next are notable.
At their heart lies a fundamental debate about whether the three-decade-long project to integrate Russia should end. At a moment when the U.S. refers to Russia as a pariah state that needs to be cut off from the world economy, others, largely in Europe, are warning of the dangers of isolating and humiliating Putin.
That argument is playing out as American ambitions expand. What began as an effort to make sure Russia did not have an easy victory over Ukraine shifted as soon as the Russian military began to make error after error, failing to take Kyiv. The Biden administration now sees a chance to punish Russian aggression, weaken Putin, shore up NATO and the trans-Atlantic alliance and send a message to China, too. Along the way, it wants to prove that aggression is not rewarded with territorial gains.
The differences over war aims broke into the open at the World Economic Forum in Davos this week, as Henry Kissinger, the former secretary of state, suggested that Ukraine would likely have to give up some territory in a negotiated settlement, though he added that “ideally the dividing line should be a return to the status quo” before the invasion, which included the Russian annexation of Crimea in 2014 and the seizure of parts of the Donbas.
“Pursuing the war beyond that point would not be about the freedom of Ukraine, but a new war against Russia itself,’’ Kissinger concluded.
Almost immediately, President Volodymyr Zelenskyy of Ukraine accused Kissinger of appeasement, retorting angrily that “I get the sense that instead of the year 2022, Mr. Kissinger has 1938 on his calendar.’’ He was referring to the year Hitler began his sweep across Europe — the event that caused Kissinger, then a teenager, to flee with his family to New York. “Nobody heard from him then that it was necessary to adapt to the Nazis instead of fleeing them or fighting them.”
But Zelenskyy has at various moments voiced contradictory views on what it would take to end the war, even offering to commit his country to “neutrality” rather than aspiring to join NATO.
Differing objectives, of course, make it all the more difficult to define what victory — or even a muddled peace — would look like. And they foreshadow a coming debate about what position Zelenskyy and his Western allies would take if negotiations to end the conflict finally get going. If Zelenskyy agreed to some concessions, would the United States and its allies lift many of their crushing sanctions, including the export controls that have forced Russia to shutter some of its factories for building tanks? Or would doing that doom their hopes of crippling Russia’s future capabilities?
In the end, U.S. officials say, the hard choices will have to be made by Zelenskyy and his government. But they are acutely aware that if Putin gets his land bridge to Crimea, or sanctions are partially lifted, President Joe Biden will be accused by Republican critics — and perhaps some Democrats — of essentially rewarding Putin for his effort to redraw the map of Europe by force.

From Biden, a Drive to Cripple Russia

For the first two months of the war, Biden and his top aides largely spoke about providing Ukraine with whatever help it needed to defend itself — and about punishing Russia with sanctions on an unprecedented scale.
Every once in a while, there were hints of broader goals that went beyond pushing Russia back to its own borders. Even before the invasion, Jake Sullivan, the president’s national security adviser, warned that if Russia attempted to take Ukraine by force, “its long-term power and influence will be diminished.”
But on April 25, Defense Secretary Lloyd Austin, speaking with a bluntness that took his colleagues by surprise, acknowledged that Washington wanted more than a Russian retreat. It wanted its military permanently damaged.
“We want to see Russia weakened to the degree it cannot do the kinds of things that it has done in invading Ukraine,” Austin said.
Austin’s candor prompted the White House to insist he wasn’t changing policy — just giving voice to the reality of what the sanctions and export controls were intended to do. But over time administration officials have gradually shifted in tone, talking more openly and optimistically about the possibility of Ukrainian victory in the Donbas.
Last week in Warsaw, the U.S. ambassador to NATO, Julianne Smith, a former national security aide to Biden, said: “We want to see a strategic defeat of Russia.”
As the United States hones its message, no one wants to get ahead of Zelenskyy, after months of administration proclamations that there will be “nothing decided about Ukraine without Ukraine.”
“President Zelenskyy is the democratically elected president of a sovereign nation, and only he can decide what victory is going to look like and how he wants to achieve it,” John F. Kirby, the Pentagon press secretary, said on April 29.
In Europe, Unity Begins to Fracture
NATO and the European Union have been surprisingly united so far in supporting Ukraine, both with painful economic sanctions aimed at Russia and in supplying an increasing quantity of weapons to Ukraine, though not jet fighters or advanced tanks.
But that unity is under strain. Hungary, which has supported five earlier sanctions packages, has balked at an embargo on Russian oil, on which it depends. And the Europeans are not even trying, at least for now, to cut off their imports of Russian gas.
The divisions are visible in war aims, too.
Leaders in central and eastern Europe, with its long experience of Soviet domination, have strong views about defeating Russia — even rejecting the idea of speaking to Putin. Estonia’s prime minister, Kaja Kallas, and Poland’s prime minister, Mateusz Morawiecki, speak of him as a war criminal, as Biden did.
“All these events should wake us from our geopolitical slumber and cause us to cast off our delusions, our old delusions, but is that enough?” Morawiecki said last week. “I hear there are attempts to allow Putin to somehow save face in the international arena. But how can you save something that has been utterly disfigured?” he asked.
But France, Italy and Germany, the biggest and richest countries of the bloc, are anxious about a long war or one that ends frozen in a stalemate, and nervous of the possible damage to their own economies.
Those countries also think of Russia as an inescapable neighbor that cannot be isolated forever. Following his reelection, Emmanuel Macron of France began hedging his bets, declaring that a future peace in Eastern Europe must not include an unnecessary humiliation of Russia, and could include territorial concessions to Moscow.
Italian Prime Minister Mario Draghi called this month for a cease-fire in Ukraine “as soon as possible” to enable a negotiated end to the war. Draghi, who has taken a hard line against Russia in traditionally Moscow-friendly Italy, said economic pressure was important “because we have to bring Moscow to the negotiating table.”

Zelenskyy has been careful not to expand his aims toward a larger degradation of Putin’s regime. He has said repeatedly that he wants the Russians pushed back to where they were on Feb. 23, before the large-scale invasion started.
Only then, he has said, would Ukraine be prepared to negotiate seriously again with Russia about a cease-fire and a settlement. He said again this week that the war will have to end with a diplomatic solution, not a sweeping military victory.
But even those aims are considered by some European officials and military experts to be ambitious. To get there, Ukraine would have to take back Kherson and the ravaged city of Mariupol. It would have to push Russia out of its land bridge to Crimea and stop Russia from annexing large parts of Donetsk and Luhansk.
Many experts fear that is beyond Ukraine’s capability.

Tweets by @forbesindia
Big tech is getting clobbered on Wall Street. It's a good time for them
Photo of the day: All eyes on you