Now one of the commanding forces in adult fiction, #BookTok has helped authors sell 20 million printed books in 2021, and is not dominated by the usual power players in the book world such as authors and publishers but by regular readers, many of them young, who share recommendations and videos of themselves talking about the books they love, sometimes weeping or screaming or tossing a copy across the room 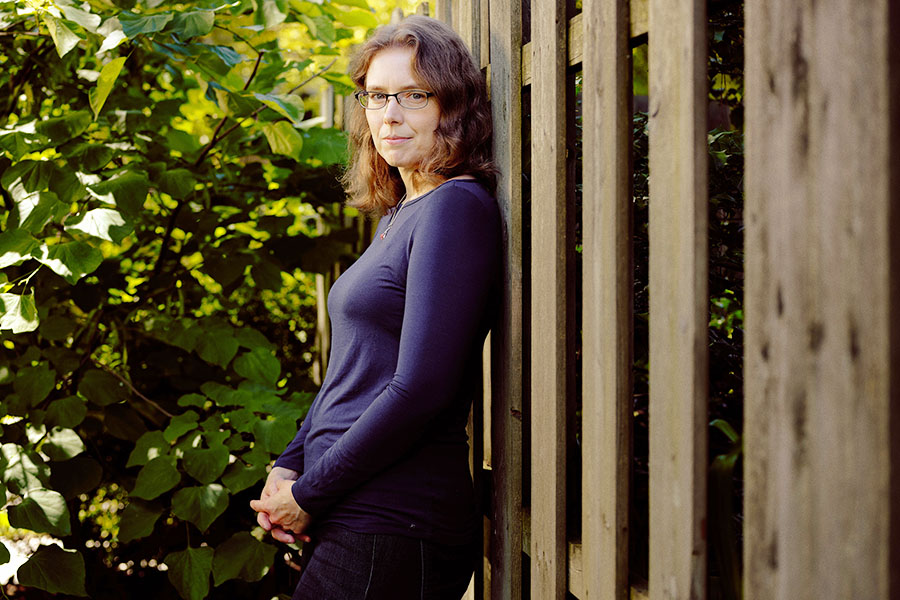 Madeline Miller, who saw her book, “The Song of Achilles,” a love story between two young men, sell two million copies after taking off on TikTok, in Merion Station, Pa. on June 29, 2022. #BookTok, where enthusiastic readers share reading recommendations, has gone from being a novelty to becoming an anchor in the publishing industry and a dominant driver of fiction sales. Image: Christopher Leaman/The New York Times

Many of this year’s bestselling books have something in common, but it’s not any of the usual factors: a famous or long-established author, a tie-in with a movie or TV show.
It is TikTok.
Early last year, the publishing industry began to notice that the books readers were gushing about on TikTok — the social media platform that traffics in short videos — were showing up on bestseller lists. Publishers were surprised, authors were surprised, even the readers making those TikTok videos were surprised.
A year later, the hashtag #BookTok has become a sustained and powerful force in the world of books, helping to create some of the biggest sellers on the market.
Books by Colleen Hoover, for example, became a sensation on TikTok, and Hoover is now one of the bestselling authors in the country. NPD BookScan, which tracks the sale of most printed books in the United States, said that of the 10 bestselling books so far this year, Hoover has written four.
TikTok has “made the transition from a novelty to a real anchor for the market,” said Kristen McLean, executive director of business development at NPD Books. “The whole idea of dominating supermarket shelves, dominating airport stores, dominating the front tables at bookstores, it’s just not really where it’s at in the same way.”
Now one of the commanding forces in adult fiction, BookTok has helped authors sell 20 million printed books in 2021, according to BookScan. So far this year, those sales are up another 50%. NPD Books said that no other form of social media has ever had this kind of impact on sales.

BookTok is not dominated by the usual power players in the book world such as authors and publishers but by regular readers, many of them young, who share recommendations and videos of themselves talking about the books they love, sometimes weeping or screaming or tossing a copy across the room.
The most popular videos don’t generally offer information about the book’s author, the writing or even the plot, the way a traditional review does. Instead, readers speak plainly about the emotional journey a book will offer.
And that, it turns out, is just what many people are looking for, said Milena Brown, marketing director at Doubleday.
“‘This is how it makes me feel, and this is how it’s going to make you feel,’” Brown said, describing the content of many of the videos. “And people are like, ‘I want to feel that. Give it to me!’”
In essence, BookTok supercharges something that’s always been essential to selling a book: word-of-mouth.
“I think one person can put it on the radar, but it takes the rest of BookTok chiming in and going big with it to really make a book succeed,” said Laynie Rose Rizer, assistant store manager at East City Bookshop in Washington, who has 70,000 followers on the platform.
“Once the word starts spreading, that’s how a book becomes big.”
Books that take off there are mainly fiction, and are generally a few years old. This is unusual in publishing, where most titles, if they have a burst of sales at all, see it right out of the gate.
Sales were initially concentrated among young adult titles, but BookTok is now even more powerful in adult fiction, according to BookScan. Romance is another major category, followed closely by science fiction and fantasy. But even classics like “Wuthering Heights” and “The Great Gatsby” get some TikTok love.
Another major beneficiary of TikTok enthusiasm is writer Madeline Miller. A former high school teacher with a master’s degree in classics, Miller’s most successful book is “The Song of Achilles,” a love story between two young men, Achilles and Patroclus.
It was published in 2012 with an initial print run of 20,000 copies. This month, its publisher, Ecco, announced it had sold 2 million copies across all formats.
Miriam Parker, Ecco’s associate publisher, said this type of sales record for a book like “The Song of Achilles” is more than remarkable. “It never happens,” she said. “This is a book about the Iliad!”
Miller, who has another book, “Circe,” that has also been popular on TikTok, said she is now taken more seriously in the literary world because of her work’s higher profile. The sales also came as a relief during an extremely challenging time.
When the pandemic began, her speaking and touring opportunities dried up and she thought she might need to go back to teaching to earn a living. Since February 2020, she has been struggling with long COVID and was concerned about her ability to work, she said.
Having “Song of Achilles” catch fire on TikTok allowed her to take care of herself and her family, and to keep working on her next novel.
“It really has changed my life,” she said. “It has given me the time to write, to continue to be a writer.”
Some of TikTok’s success in selling books can be traced to bookstores, which started paying attention to which books were gaining traction on the platform, McLean said. Barnes & Noble in particular caught on early; many of its stores put out tables with a selection of trending titles. Those displays spread the word about BookTok to new readers, and the cycle continued.
This week, TikTok and Barnes & Noble announced an official partnership — a summer reading challenge designed to encourage people to post about books they’re reading and to cross-pollinate readers. A BookTok landing page shows users some curated videos, including a selection called “get to know your local B & N booksellers,” and a list of suggested titles, which links to the Barnes & Noble website. Barnes & Noble will have QR codes in its stores that send customers to the BookTok landing page.
Barnes & Noble stores have their own TikTok channels, as do many publishers. Publishers also send TikTok creators free books or pay them to make videos about certain titles. But as powerful as BookTok has become, it’s difficult for publishers to harness it as a sales tool.
“It’s not one video that makes a book explode in sales,” said Brown from Doubleday. “It’s this grassroots explosion of people creating the videos and then organically, by word-of-mouth, it grows from there.”
Getting an author on the platform, for example, is also no guarantee of a book’s success. It’s not even a requirement.
“I am still not on TikTok,” Miller said. “I remain very bad at social media.”