Little progress in wooing India away from neutral Russia stance: US

But White House spokeswoman Jen Psaki said Joe Biden "made clear that he does not believe it's in India's interest to accelerate or increase imports of Russian energy and other commodities." 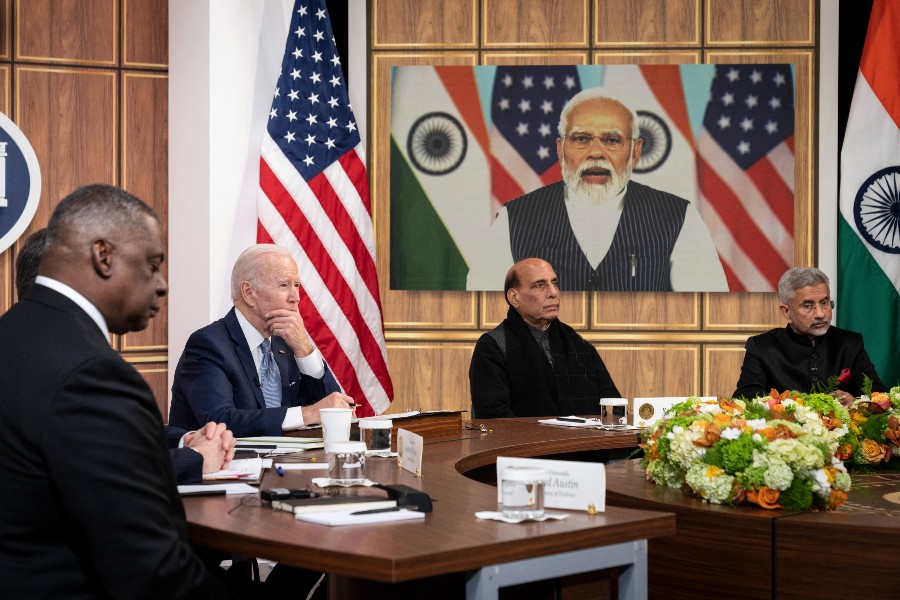 Washington, United States: President Joe Biden and Indian Prime Minister Narendra Modi had a "candid exchange of views" on the Ukraine crisis at a virtual summit Monday, but the United States appeared to have made little progress in wooing India away from its neutral stance on Russia's invasion.
"It is important that all countries, especially those with leverage, press Putin to end the war," Secretary of State Antony Blinken told reporters after the virtual summit, which was followed by an in-person meeting with his Indian counterpart and the defense ministers from both countries.
"And it's also important that democracies stand together and speak with one voice to defend the values that we share," Blinken said after the talks, described by one US official as "warm and productive."
Biden made no major demands of India, a key strategic ally in US plans to contain growing Chinese power in the Asia-Pacific region, and there was no indication of significant progress toward a unified posture on the Ukraine conflict.
But White House spokeswoman Jen Psaki said Biden "made clear that he does not believe it's in India's interest to accelerate or increase imports of Russian energy and other commodities."

Modi has tried to walk a tightrope between maintaining relations with the West and avoiding alienating Russia, but has raised concerns in Washington by continuing to buy Russian oil.
In his talks with Biden, he merely said the situation was "very worrying" and recalled his support for talks between Russia and Ukraine, which Washington views with skepticism.
Indian Foreign Minister S. Jaishankar showed a hint of annoyance when he told reporters asking about Biden's push for India to cut energy imports from Russia that "probably our total purchases for the month would be less than what Europe does in an afternoon."

Biden has been pressuring world leaders to take a hard line against Moscow, although a US official said there was no "concrete ask and concrete answer" on energy imports.
"India has to make its own decisions about how it approaches this challenge," said Blinken, noting however that India "has made very strong statements ... condemning the killing of civilians in Ukraine" and was "providing significant humanitarian assistance."
Failing to win over such a key ally to its cause, Washington appears instead to be heaping on the pledges of friendship to prevent India from gradually slipping into the Russian camp, with Moscow actively courting it.
Biden began the meeting by saluting the "deep connection" between the two countries and said he wanted to continue their "close consultation" over the war.
Biden and Modi failed to reach a joint condemnation of the Russian invasion when they last spoke in early March at a meeting of the so-called "Quad" alliance of the United States, India, Australia and Japan.

And New Delhi abstained when the UN General Assembly voted last week to suspend Russia from its seat on the 47-member Human Rights Council over allegations that Russian soldiers in Ukraine engaged in war crimes.
The United States has already warned that any country that actively helps Russia to circumvent international sanctions will suffer "consequences."
Yet this has not deterred India from working with Russia on a rupee-ruble payment mechanism to circumvent banking sanctions, while taking advantage of discounted oil prices offered by Russian producers.
Meanwhile India has bought at least three million barrels of crude from Russia since the start of the invasion on February 24, despite an embargo by Western nations.
Biden said on March 21 that India was an exception among Washington's allies with its "somewhat shaky" response to the Russian offensive.
In the Cold War, officially non-aligned India leaned towards the Soviet Union, in part due to US support for arch-rival Pakistan.
According to experts, Russia remains India's biggest supplier of major arms and India is also Russia's largest weapons buyer.
Russian Foreign Minister Sergei Lavrov, who met with Modi in New Delhi in early April, lauded India for its approach to the conflict, and in particular for judging "the situation in its entirety, not just in a one-sided way."
By Frankie TAGGART
© Agence France-Presse

Tweets by @forbesindia
Man, woman or X: US rolls out gender-neutral passports
Sikhs sue Marine Corps over restrictions on beards