According to the poll by the University of Central America (UCA), 75.6 percent of respondents said they never used cryptocurrency in 2022, and 77 percent consider its adoption 14 months ago as legal tender, alongside the dollar, "to have been a failure" 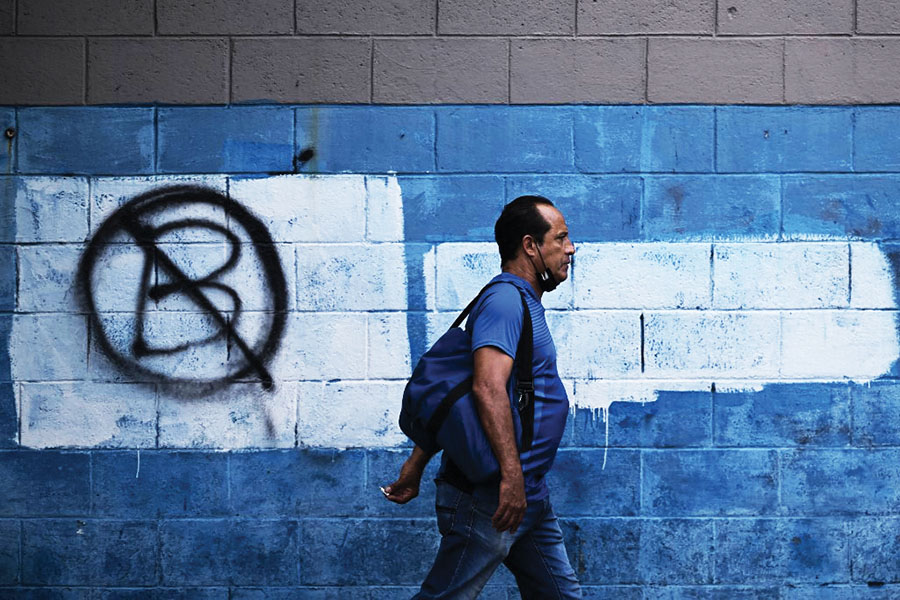 A man walks past a wall painted with an anti-bitcoin protest symbol, in San Salvador, on October 18, 2022. Most Salvadorans have not used bitcoin so far this year and consider that the emblematic bet of President Nayib Bukele has been a failure, assured Tuesday a poll of the private Central American University (UCA, Jesuit). Photo: Marvin RECINOS / AFP

San Salvador, El Salvador: More than a year after Bitcoin became legal tender in El Salvador, a new poll Tuesday showed most people in the country consider the controversial move by President Nayib Bukele as a "failure."
According to the poll by the University of Central America (UCA), 75.6 percent of respondents said they never used cryptocurrency in 2022, and 77 percent consider its adoption 14 months ago as legal tender, alongside the dollar, "to have been a failure."
Bitcoin, whose value has tumbled over the past year, "is the government's most unpopular measure, the most criticized and the most frowned upon," said UCA rector Andreu Oliva, commenting on the results of the study.

Bukele's idea was to promote crypto money transfers from some three million Salvadorans living overseas, mainly in the United States, to their relatives back home, thereby saving on bank charges.
The president's decision was a strategic one, given that these remittances make up more than a quarter of El Salvador's gross domestic product.
But according to data from the Salvadoran Central Bank in early September, a year after the introduction of Bitcoin, "less than two percent" of remittances from emigrants were made using the cryptocurrency.
In September 2021, Bitcoin was hovering around $45,000. By November it soared to $68,000, but after a steep drop it is currently trading below $20,000.
Taking advantage of the plummeting prices, Bukele bought 80 Bitcoin with public funds in July, bringing El Salvador's total reserves to 2,381 units.
According to the UCA study, 77 percent of Salvadorans believe their president "should not continue to spend public money to buy Bitcoin."
Also read: Prices of crypto fall as El Salvador adopts bitcoin as legal tender
The survey also looked into an emergency regime in place since March as part of the "war" on gangs decreed by Bukele, which led to the arrest of 55,000 suspected members of criminal gangs, the dreaded "maras."
The population still overwhelmingly approves of it, at 75.9 percent, but that figure was down nine points from May, when it was 84.8 percent.
© Agence France-Presse