The price of Bitcoin has fallen more than 50% from its peak in November, and the cryptocurrency market as a whole has lost more than $1 trillion in value over that time 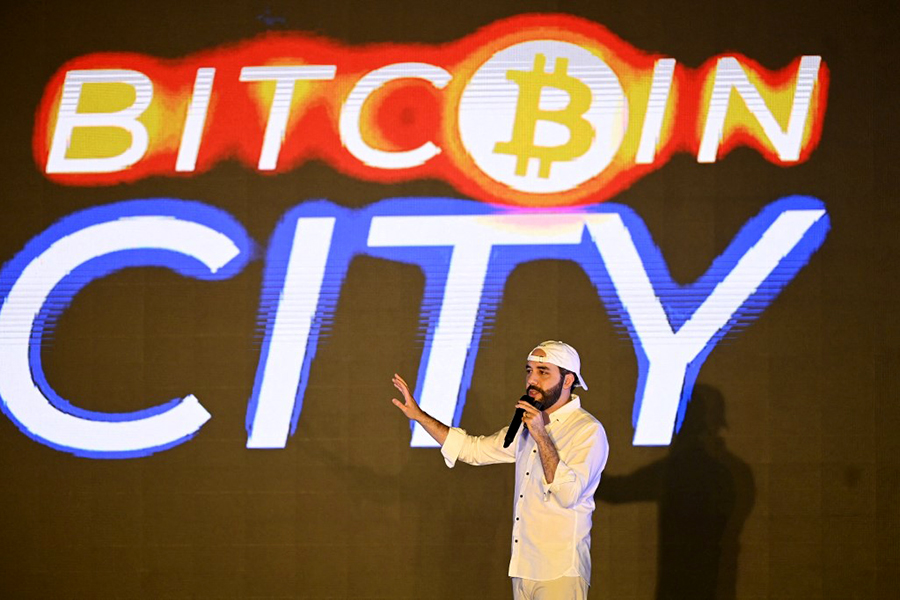 The President of El Salvador, Nayib Bukele, gestures during his speech at the closing ceremony of the Latin Bitcoin conference (LaBitConf) at Mizata Beach, El Salvador. - The IMF in January, 2022 called on El Salvador to change course and stop using Bitcoin as legal tender, citing "large risks" posed by the cryptocurrency. (Photo by MARVIN RECINOS / AFP)

The International Monetary Fund urged El Salvador on Tuesday to end its recognition of Bitcoin as legal tender. Adopting a cryptocurrency in this way “entails large risks for financial and market integrity, financial stability and consumer protection,” the fund’s executive board wrote.

The price of Bitcoin has fallen more than 50% from its peak in November, and the cryptocurrency market as a whole has lost more than $1 trillion in value over that time. For prominent institutions that have bought into Bitcoin, from El Salvador’s government to some multinational corporations, the downturn could prove costly — and may create regulatory headaches.

A year ago, when the meme-stock frenzy was about to morph into a crypto boom, Bitcoin was worth just over $30,000. Since then, it has twice more than doubled in price and then given up the gains. Crypto evangelists like President Nayib Bukele of El Salvador, Elon Musk of Tesla and Michael Saylor of MicroStrategy seem undeterred.

El Salvador has spent about $85.5 million on Bitcoin since adopting the cryptocurrency as legal tender in September, including a $15 million purchase a few days ago, during the latest dip. The country has paid an average of about $47,500 per Bitcoin, and the current price is about $37,000, meaning that the Salvadoran investment has lost about 23% of its value.

“Most people go in when the price is up, but the safest and most profitable moment to buy is when the price is down,” Bukele said on Twitter, where he announces Bitcoin purchases and rebukes critics of this investment strategy. “It’s not rocket science.”

MicroStrategy is also unmoved by the downturn. The business intelligence software company has spent about $3.75 billion on Bitcoin, an investment now worth about $4.5 billion. The company’s finance chief told The Wall Street Journal that it would keep on buying.

But holding cryptocurrency is an accounting hassle. In December, the Securities and Exchange Commission told MicroStrategy to revise how it reports the value of its hefty Bitcoin holdings.

MicroStrategy argued that the crypto should be treated like other assets, with gains and losses recognized immediately. The SEC treats Bitcoin like intangibles, with losses reflected by impairments but gains recognized only upon a sale.

From an accounting perspective, then, holding on to crypto can only ever be a neutral or losing proposition.