India's policymakers sent local crypto trade into a spin with reports of a proposed bill to ban private cryptocurrencies. Trade has stabilised and so have intermediaries, but the uncertainty on the road ahead 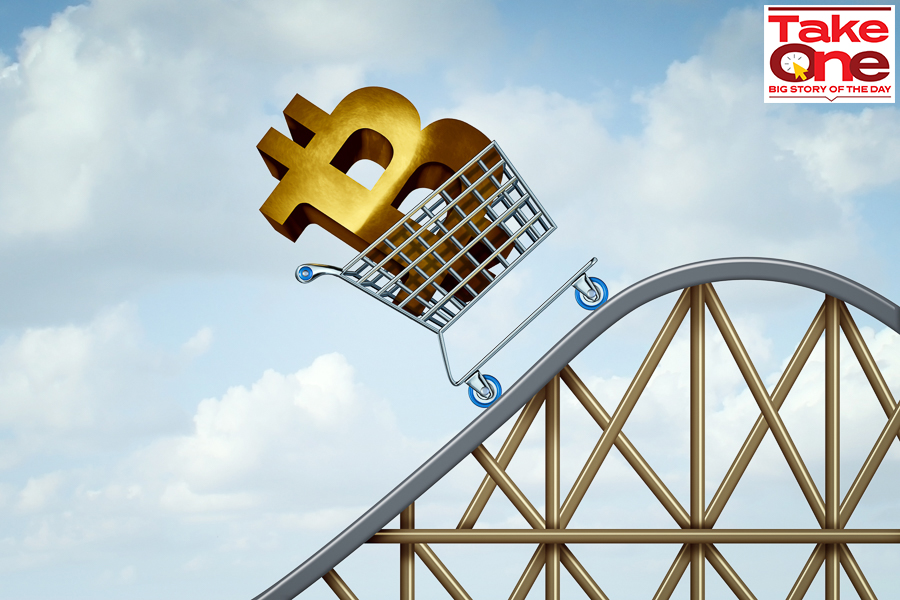 Indian government is considering to prohibit the use of private cryptocurrencies except ‘certain exceptions’ in an upcoming bill
Image: Shutterstock

Indians investing in cryptocurrencies were spooked in early morning trade on Wednesday, with prices of Dogecoin and Shiba Inu tumbling on local crypto exchanges, following reports that the government is considering to prohibit the use of private cryptocurrencies except ‘certain exceptions’ in an upcoming bill. The government is working to table the Cryptocurrency and Regulation of Official Digital Currency Bill, 2021 in parliament during the winter session which starts November 29.

What got investors scrambling to book profit were the words ‘prohibit all private cryptocurrencies’. Does this mean the lwa will bring all existing investments to zero value? And are Bitcoin or Ethereum private or public cryptocurrencies?

What made interpretations and news uncertain is that the bill is not yet public and yet, the headline is similar to the bill the government had proposed to introduce in February. So has the bill or the language in it changed in any way? Impossible to ascertain at this stage.

Twenty-one-year-old Mumbai-based student Nairit Gala is one of India’s young crypto investors, dabbling in this trade since 2020. Initially, he allocated five percent of his portfolio to cryptos, using it to diversify his portfolio. “When I read about the introduction of the crypto regulatory bill, I was not fazed a lot. A similar bill was drafted last year as well. Moreover, we can see other precedent nations like Japan, where the ban on crypto has been only on fully anonymous and impossible to track cryptos, like Dash, Monero and ERP.”

Gala now invests only in Ethereum, Polka Dot and Cardano—coins that one could call the “blue chips of cryptocurrencies” along with Bitcoin. He is confident that with the technological framework these coins provide and the scope of growth due to NFTs (non-fungible token), these will not be regulated or banned. “I'm sleeping relatively calmly.” Gala has gone on a shopping spree and added more coins at a seemingly discounted valuation.

Gala will wait for the government bill to get more clarity. The problem is that the term ‘private cryptocurrencies’ is not only open to interpretation; it is also limited to India’s policymakers. Besides, there are diametrically opposite meanings of the word ‘private’ when used by the government compared to that in the crypto trade. For the government, private cryptocurrencies mean anything that has not been issued by a sovereign nation. But in the crypto trade, they say there are no privately owned cryptos, so all is in the public domain. 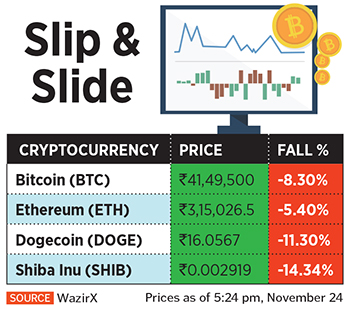 “The signal we seem to get is that if cryptos are to be allowed, we cannot call it a currency or allow payments to be made through. It could be considered an asset class which investors could invest in at their own risk,” says Praphul Chandra, founder and chief scientist of KoineArth, a blockchain-based supply chain startup.

Rameesh Kailasam, CEO of IndiaTech.org, says the interpretation could be that the government plans to ban those currencies not publicly available. Kailasam says India could be heading towards a move seeking “collaborative mechanism” of regulation of cryptocurrencies where there is an alliance of democratic countries. This was probably part of what Prime Minister Narendra Modi hinted at in an address a few days ago.

Dr Mahendra Singh, minister of Jal Shakti, Uttar Pradesh, has sought to allay investor concerns. In his LinkedIn post on November 24, he says: “India is putting ban on only private cryptocurrency which are very few… private cryptocurrency is one, the transaction of which cannot be traced and there is a possibility of the transaction and its history being manipulated. Currencies which are based on public network are traceable.”

Crypto intermediaries, such as exchanges that facilitate such trades, remain unfazed by the fresh uncertainties. “The industry has been actively communicating with all stakeholders, keeping investor protection at the forefront. Our discussions over the last few weeks indicate there is a broad agreement on ensuring customers are protected, the financial system stability is reinforced and India is able to take advantage of the crypto technology revolution,” says Ashish Singhal, founder, and CEO of CoinSwitch Kuber. “We are hopeful that the government will involve the industry stakeholders while drafting the bill.”

“At CoinSwitch Kuber, we shall follow the directions provided by the government. As of now, I urge all crypto asset investors in the country to remain calm, do their own research before arriving at a rushed conclusion. Investors should wait for a government statement on this matter and not rely on secondary sources of information,” he adds.

Shivam Thakral, CEO of BuyUCoin, another cryptocurrency exchange, said the fresh ripples have not affected global cryptocurrency prices. “The global crypto markets have remained unflinched by the recent fear, uncertainty and doubt (surrounding crypto laws) in India. And in any worst case scenario related to prohibition of crypto in India, we expect the lawmakers would provide ample time for investors to sell-off their holdings.”

Thakral added that there was no specific definition laid out around public and private cryptocurrencies. “But the context here seems to suggest that public crypto resembles CBDCs (sovereign digital currencies) and private crypto refers to assets like Ripple (XRP), Tron (TRX).”​

What the government should keep in mind

Assuming there is no move to ban cryptocurrencies, the regulatory lens should be that of regulating a technology and not an asset, currency or a security. The fundamental benefits for India, if it embraces cryptocurrency, is that we would be opening ourselves up to a foundational technology. “We need to have a very light touch approach (like some Western countries) to regulate cryptocurrencies because the technology is evolving extremely rapidly. Many facets of the technology are being introduced every day, which the proposed law may not contemplate. If a heavy-handed, comprehensive legislation is introduced, we will run the risk of missing out on nuance and on continuing technological developments,” says Anirudh Rastogi, founder of Ikigai Law, who has represented crypto exchanges before the Supreme Court. In the event the government does want to restrict the use of cryptocurrencies towards payments, it is important to bear in mind that payment of gas fee needs to be made. If this is not allowed, developers in India will not be able to access this technology. [A gas fee is the payment you need to pay as a transaction fee in cryptocurrency form to operate or use a blockchain.]  Legislation for NFTs separate from cryptos: NFTs do not present the same risk that some cryptos do, they cannot be used for payments. Hence, they should not be regulated in the same manner.  India, it is believed, is planning to introduce pre-approved list of cryptocurrencies. As technology expands, there are many new currencies getting introduced, which may be equally representative or interesting of what’s to come and the government is not well placed to identify these. Sophisticated investors should be allowed to invest in these as they have the risk-taking capacities or an industry body group should decide on these. The action is obviously going to heat up, both for investors and intermediaries, who will need to follow a clearer code of conduct when the bill gets passed in parliament. Nairit Gala, a 21-year-old crypto investor, is confident that the majority of the crypto market in India should escape unscathed. “In the scenario that a total ban comes, I will explore the option to shift all my crypto holdings to friends' wallets in the US, and parts of Europe." This is exactly why a blanket ban on cryptocurrencies would not be the most judicious step.